What clothes did the Egyptians wear? 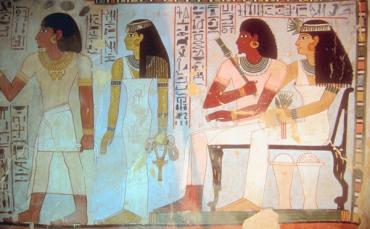 The Egyptians put a lot of emphasis on good looks and also wore plenty of jewelry.

The rich upper class in particular was very lavishly dressed on festive occasions.

The clothing was also well adapted to the climate, so that men often wore linen cloths.

While women usually wore a long, crease-free shirt that was fastened to the shoulders with two straps,

The footwear of choice for all Egyptians was sandals made of leather or papyrus.

White was the preferred color of clothing (symbol of purity) and colored jewelry could then also be worn.

Beautifully decorated amulets around the neck, which should ward off disaster.

Rich Egyptian women, priestesses, male officials, aristocrats up to the Pharaoh wore wigs made of human hair, which were dipped in beeswax and were considered status symbols.

At parties, scented cones made of fat were attached to the heads, which spread a pleasant scent when they melted.

In addition, the Egyptians rubbed their bodies with essential oils and made up their eyes with khol and colored their cheeks and lips with red earth powder.