What does changing the gear oil do?

What is the function of the gear oil?

Gear oil has a similar function to engine oil: It ensures lubrication of the gears, which mesh precisely, and thereby reduces wear. At the same time, it has a cooling and cleaning function: it picks up the smallest abrasive particles and transports them to the filter so that they do not cause any undesirable friction in the gearbox. However, as the gear oil gets older, it becomes increasingly soiled and loses its good flow properties as a result of the load. This can also be seen in the driving behavior over time. Typical changes caused by old gear oil are:

• The gear change is no longer smooth. This can be seen in the manual transmission in particular, when the gear shift and power transmission are delayed.
• The gears can no longer be engaged so easily. This is especially the case in first and second gear. Gear changes are jerky, especially when the oil is still cold.
• A jolt when changing gear levels can also be one of the consequences of automatic transmissions.
• Rattling or rattling when changing gears.
• Oil spots under the gearbox show that the gearbox is leaking. Gear oil must be topped up and, if necessary, a repair must be carried out.

ABOUT THE OFFER: Gear oils on Amazon

Why change the transmission oil at all? 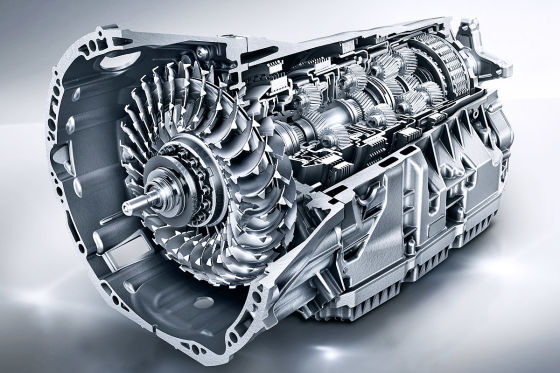 Microscopic particles from material abrasion contaminate the oil over time.

If the manufacturer does not plan to change the transmission oil, the transmission oil should actually last the entire life of the car. However, this is Durability is usually limited to a mileage of 150,000 to 180,000 kilometers or a service life of eight to ten years. Anyone who does not change the transmission oil after this time at the latest can assume that the transmission will not achieve a significantly higher mileage. Because over time, more and more small particles are deposited in the oil. In addition, the oil loses its good lubricating properties over time. A gradual loss of oil also occurs over time. If lubrication in the gearbox is no longer guaranteed, high wear and overheating are the result. You are then not far from expensive gearbox damage.

How often should you change the gear oil?

The transmission oil change is - unlike an engine oil change - only necessary very few times in the life of the car. If the manufacturer does not provide an interval, which is the rule rather than the exception, it should the first change after a mileage of around 80,000 to 100,000 kilometers or six to eight years be made. Here, however, it also depends on the respective model and driving style: a sporty driving style places greater demands on the transmission, increases wear and tear and thus also causes the transmission oil to age faster. The same applies to short journeys, which demand more from the transmission due to the frequent gear changes.

Some transmissions can easily cover 120,000 kilometers with the same oil, while others are completely filthy after 60,000 kilometers. That is why you should keep an eye on the gear oil and, if necessary, ask about its condition at the next service. Because As part of the inspection, the gearbox is checked for leaks and gear oil fill quantity anyway. It is advisable to change the oil quickly, especially if you can already feel signs of outdated gear oil. Important: After a gearbox repair, the oil should always be changed, after about 5000 kilometers. This is because this is when the abrasion is greatest and there are many residues in the oil. Regardless of whether it is a manual or automatic transmission.

How do you go about changing the transmission oil?

When changing gear oil, a distinction is made between simple oil changes and gear flushing. For the transmission oil change is drain the oil through the drain plug and then fill in new oil. In the case of a manual gearbox, this process is usually sufficient. With automatic transmissions, however, a large amount of the old oil and debris that is still in the filter or oil cooler is often left behind. If you now simply fill in new gear oil, you have only removed part of the contaminated sites. Therefore will In the case of automatic transmissions, the transmission is usually flushed performed. The old oil is pumped out of the gearbox under pressure in order to remove as much of it as possible. Fresh gear oil and cleaning additives are then flushed through the gear unit with the engine running. And this until no more residues can be seen in the oil flowing out. New gear oil is then poured in again. Flushing the gearbox makes the gearbox oil change really effective - but also costly.

A transmission oil change is not for laypeople. Experienced screwdrivers can do it on their own. As a rule, it is easier with a manual transmission than with an automatic. Because the latter always requires a gear flush, for which a specialist should be consulted. Flushing is also more effective with manual transmissions, but a simple oil change is worthwhile here. For the procedure is be sure to refer to the vehicle's operating instructions, because here it is described which oil must be used and where the drain plug and the filler plug are located. If the wrong oil is used, it can, in the worst case, damage the gear unit!

Before draining the old gear oil, the car must be warmed up. It is best to switch through all gears once. Since the drain plug is usually difficult to access, the car must be driven onto a lifting platform. The The drain and filler plugs are unscrewed and the oil drained as if changing the engine oil. Important: The used oil must be collected and properly disposed of (hazardous waste!). The drain and filler plugs should be replaced after the change, as dirty oil residues also settle here and the old ones may no longer seal properly. The new gear oil is then added. This usually requires a special injection tool (syringe or filling hose).

What does a gear oil change cost? 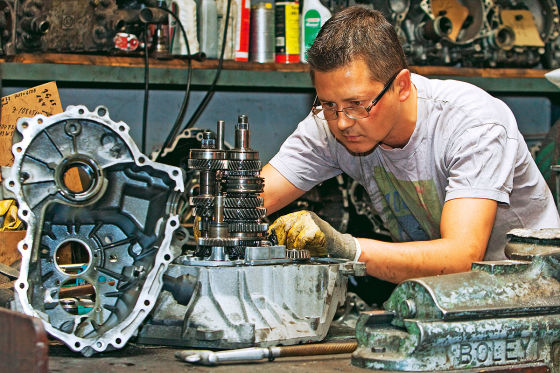 A gearbox repair or a new gearbox can quickly cost several thousand euros.

A simple transmission oil change - i.e. draining and topping up - costs usually around 200 euros for professionals. Anyone who does the oil change on their own only has to bear the material costs, which should be covered by a good 100 euros. A Flushing the gearbox is significantly more expensive due to the higher effort and the high oil requirementand quickly costs four digits. However, one should keep in mind: In the end, the whole thing is still cheaper than a new gearbox.

What is the difference between engine and transmission oil?

In contrast to gear oil, engine oil is exposed to very high thermal loads. Accordingly, it must be particularly heat-resistant. Gear oil, on the other hand, is less exposed to high temperatures. The operating temperature is usually around 80 degrees. Besides, that is Gear oil is thinner and does not wear out as quickly as engine oil. Gear oil is also divided into SAE classes, but has different viscosities than motor oil. For example, a common specification is 75W90. In addition, the gear oils are classified according to international standards in performance levels, the so-called GL classes ("gear lubricant") 1-5. With modern cars you only come across the classes GL-4 and GL-5.

The The requirements for oils in automatic transmissions are even higher than for oils for manual transmissions. After all, the oil not only has to lubricate the gears here, but also other hydraulic components for changing gears. This is why special fluids, so-called "Automatic Transmission Fluids" (ATF), are used here. The gear manufacturers prescribe their own specifications here. That is why it is all the more important only oils approved by the manufacturer to use. Otherwise you risk serious damage.