What is the most expensive diamond ever

The most expensive diamonds in the world

Diamonds are those Birthstones of April, also a symbol of prosperity and endless love. With diamonds, people try to woo their great love, so they are considered the crown of the Gemstones. We once put together which ones Diamonds differ from all others - in price.

This 14.82-carat bright orange diamond broke the world record when it was sold for 32 million euros in 2013. In general, pink and blue diamonds are the most in demand, but this beautiful and rare gem surprised the world with its orange beauty and size. 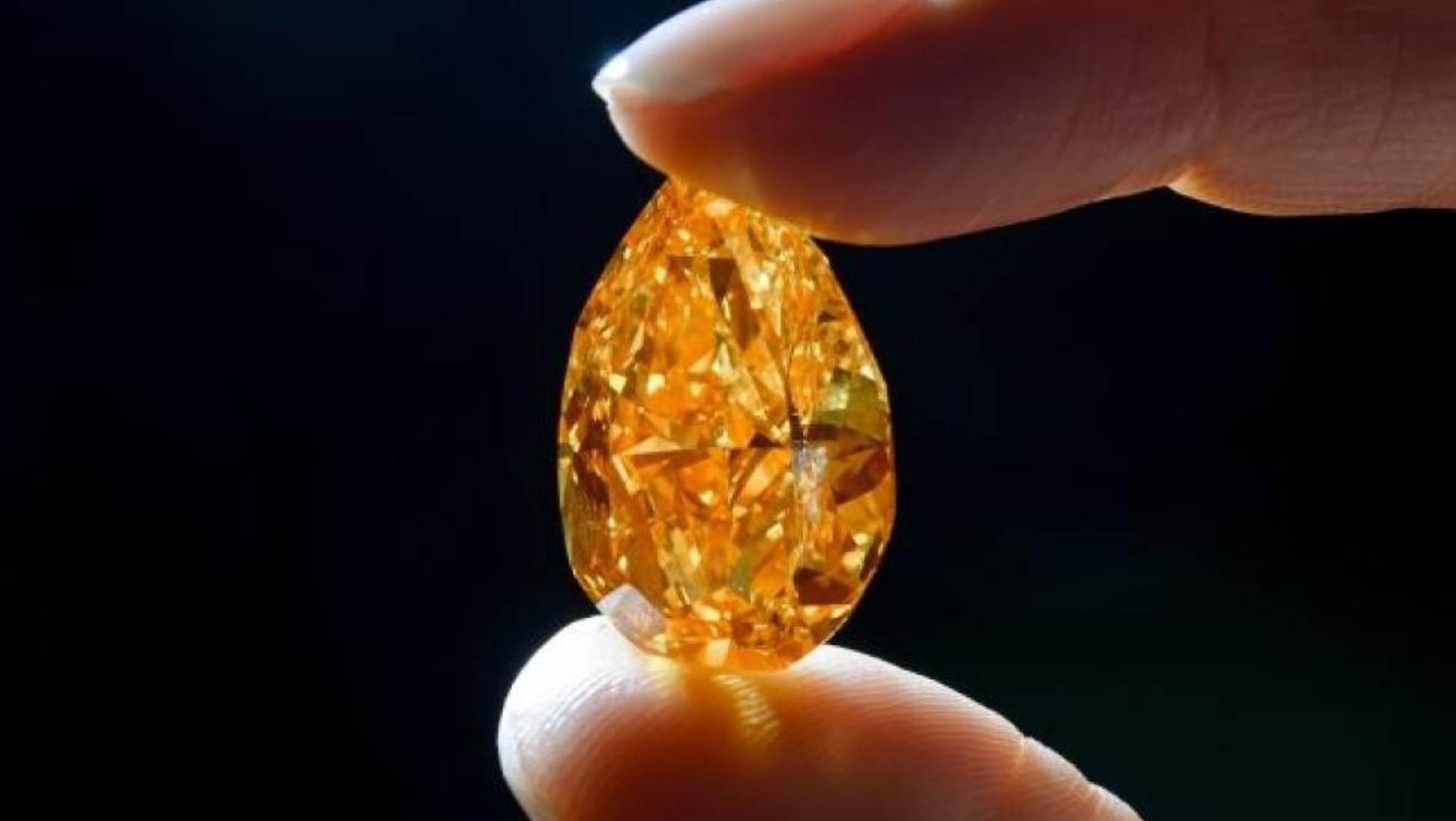 Proof that orange is a popular color: these gemstones were sold for 32 million euros

This 34.54 carat pink diamond was found 300 years ago in the Golconda mines in India. It was bought by the Hyderabad royal family in 1960 from the jeweler Van Cleef & Arpels and was named after Princie (Prince), the son of the family, Sita Dem, the Maharajah of Baroda. 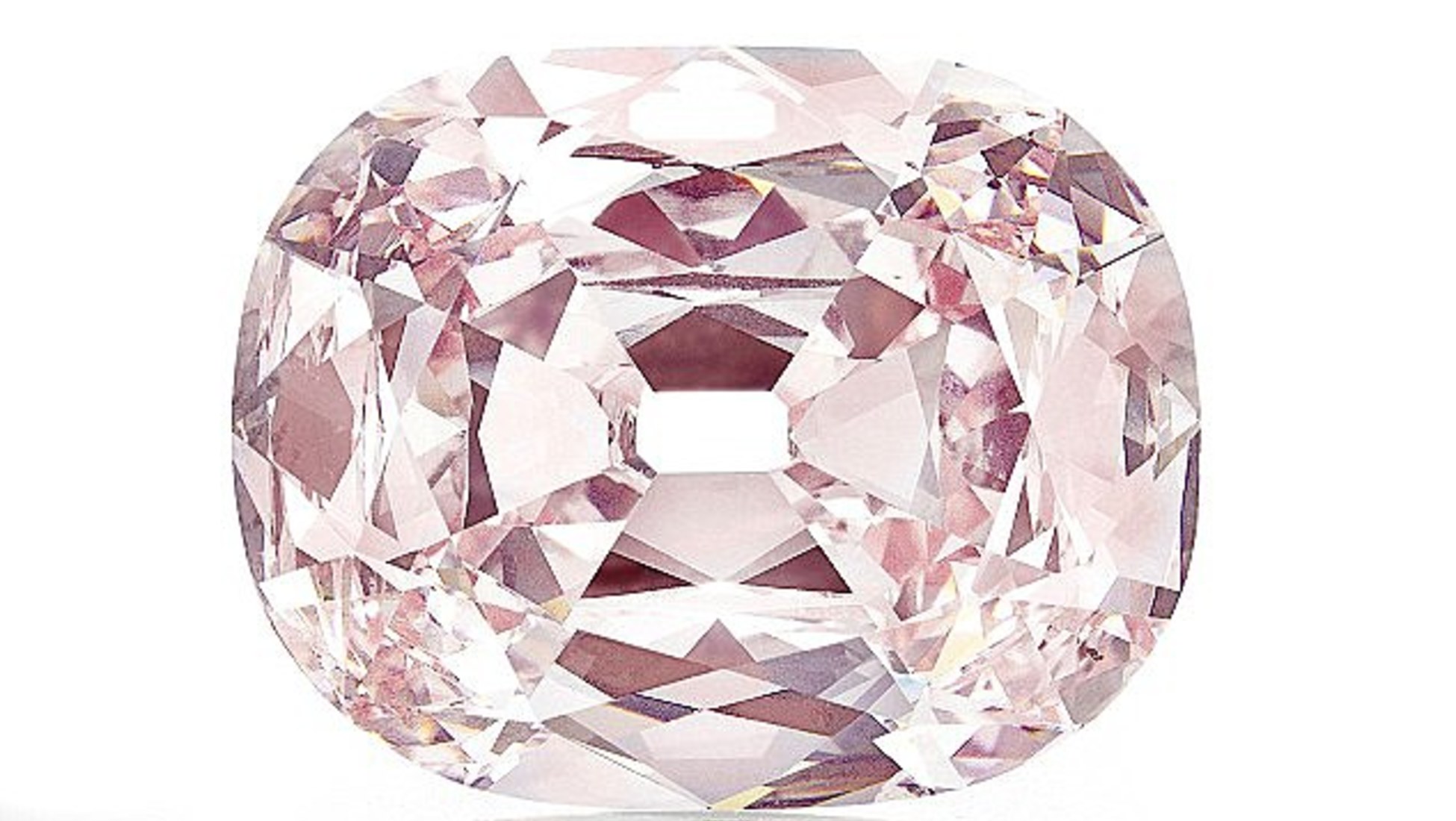 A rectangular diamond of 24.78 carats, which has been classified by the Gemological Institute of America (GIA) as "Fancy vivid Pink", the top classification for the degree of purity. Laurence Graff, the king of destiny, bought this diamond for 38.7 million euros and had a ring made from it. Quite an expensive accessory. 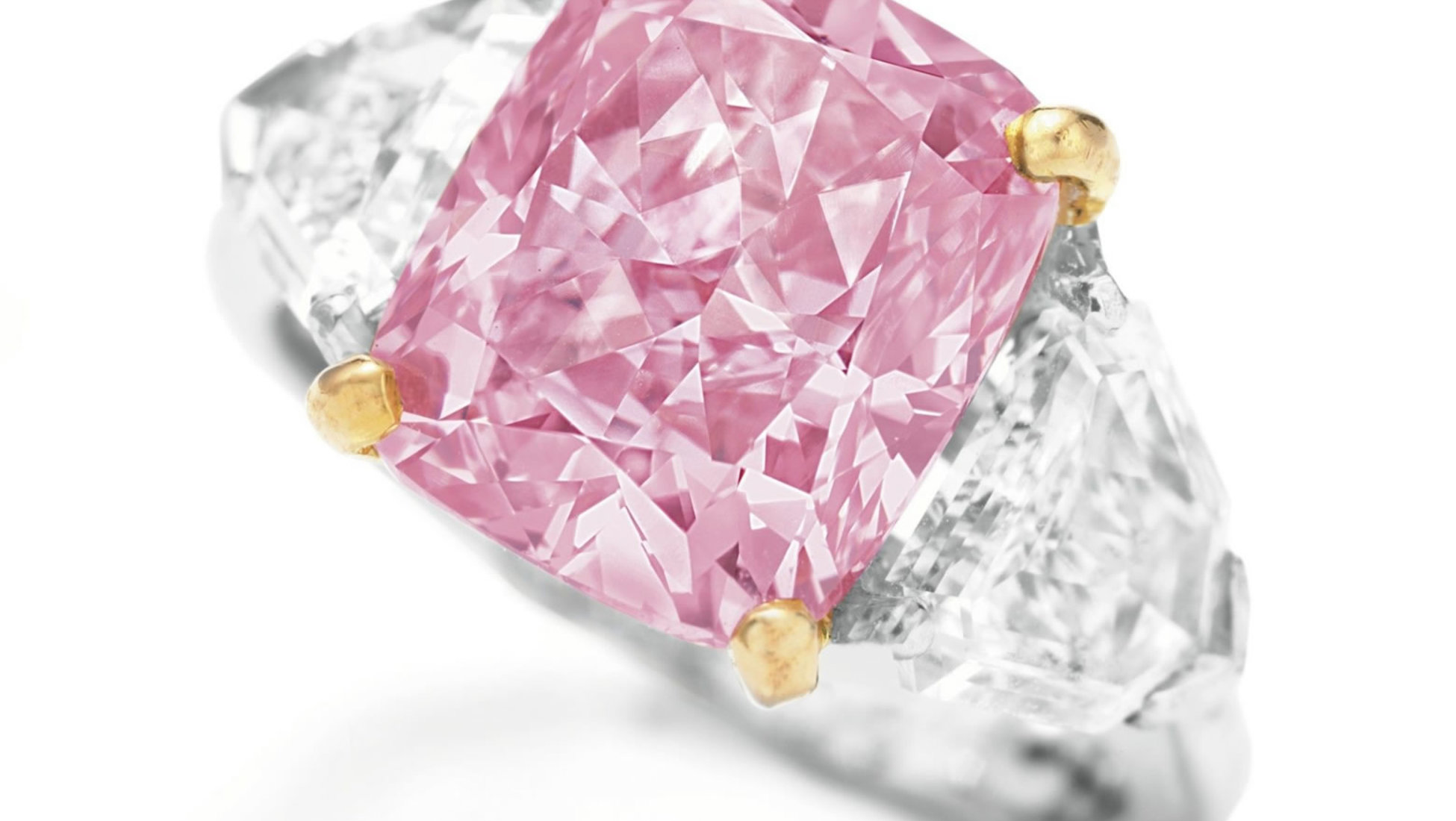 This diamond was set in a ring. Wearing this ring makes a clear statement.

This beauty in light pink, the color was also previously known as Steinmetz pink, is the largest pink diamond that has ever been given the best classification of "Vivid Pink" by the GIA. The 59.60 carat diamond was purchased by diamond cutter Isaac Wolf in 2014. Unfortunately, it turned out that he wasn't able to pay that price. Its value is currently estimated at an incredible 60.7 million euros. 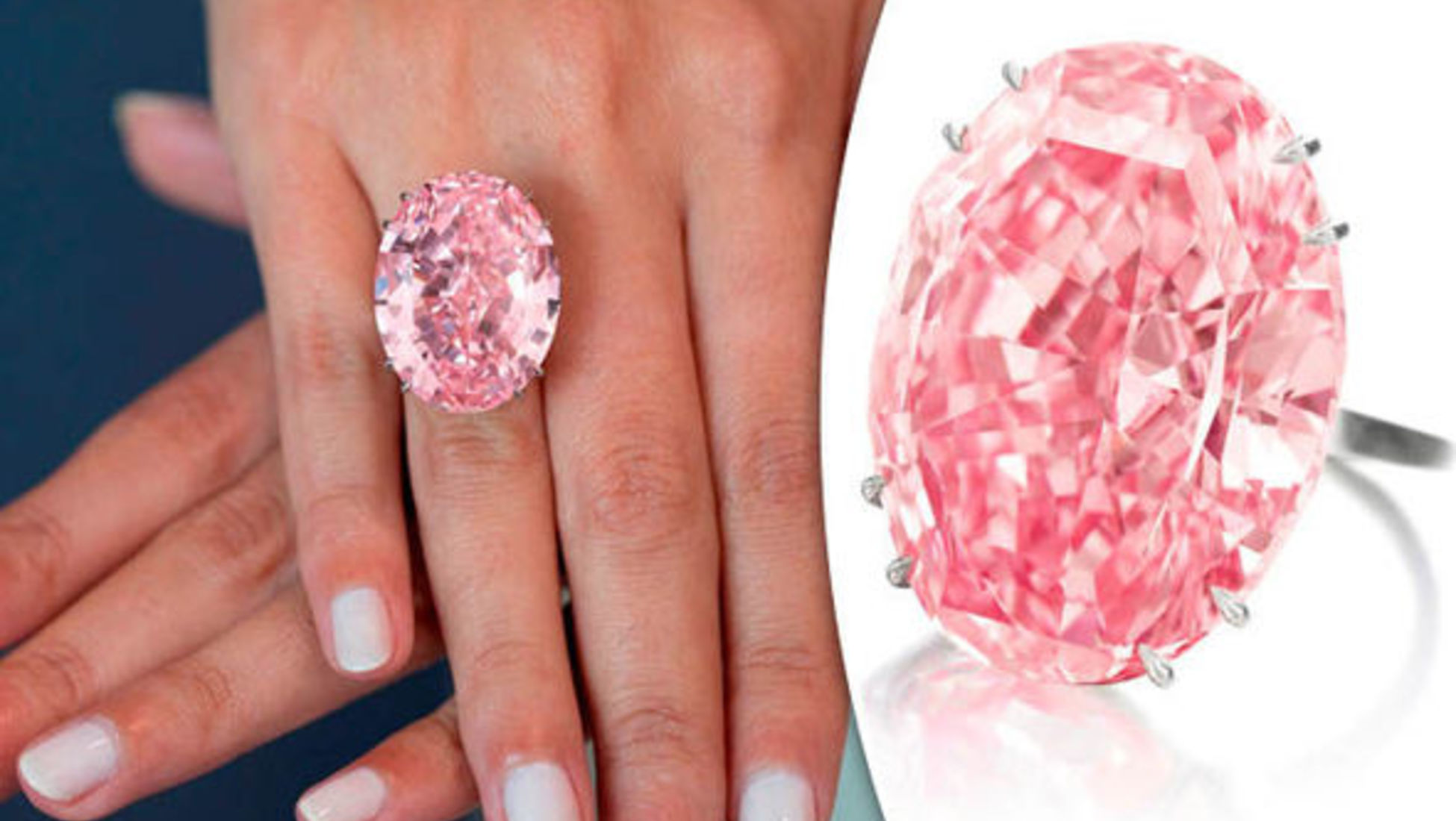 The Wittelsbach Graff is a beautiful blue diamond and was discovered in India over 300 years ago. This 35.56 carat diamond was part of the Austrian Crown Jewels for a long time and was then bought by Laurence Graff. The jeweler had the impurities removed by a diamond cutter, which did not receive any positive attention in royal circles. In 2011 the stone was sold to the Emir of Qatar, Sheikh Hamad bin Khalifa, for 67.4 million euros. 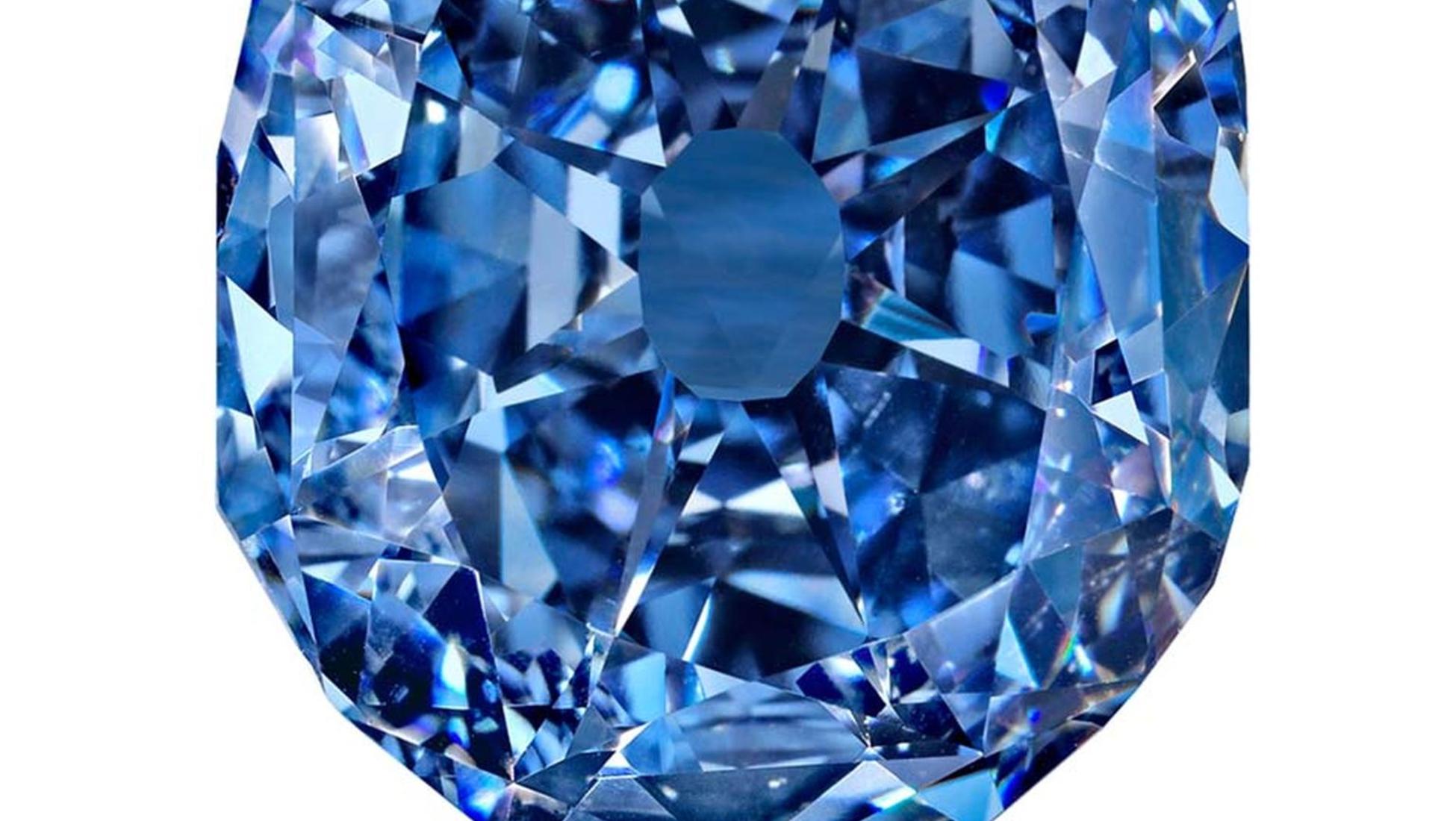 This gem was sold for over 67 million euros. Image source: The Jewelery Editor

This transparent diamond, named after the largest diamond end producer in the world De Beers, is classified with the highest degree of purity and the color grade D. This means that this stone is a flawless diamond. It weighs 273.85 carats. Before it was cut, the stone weighed an incredible 599 carats. 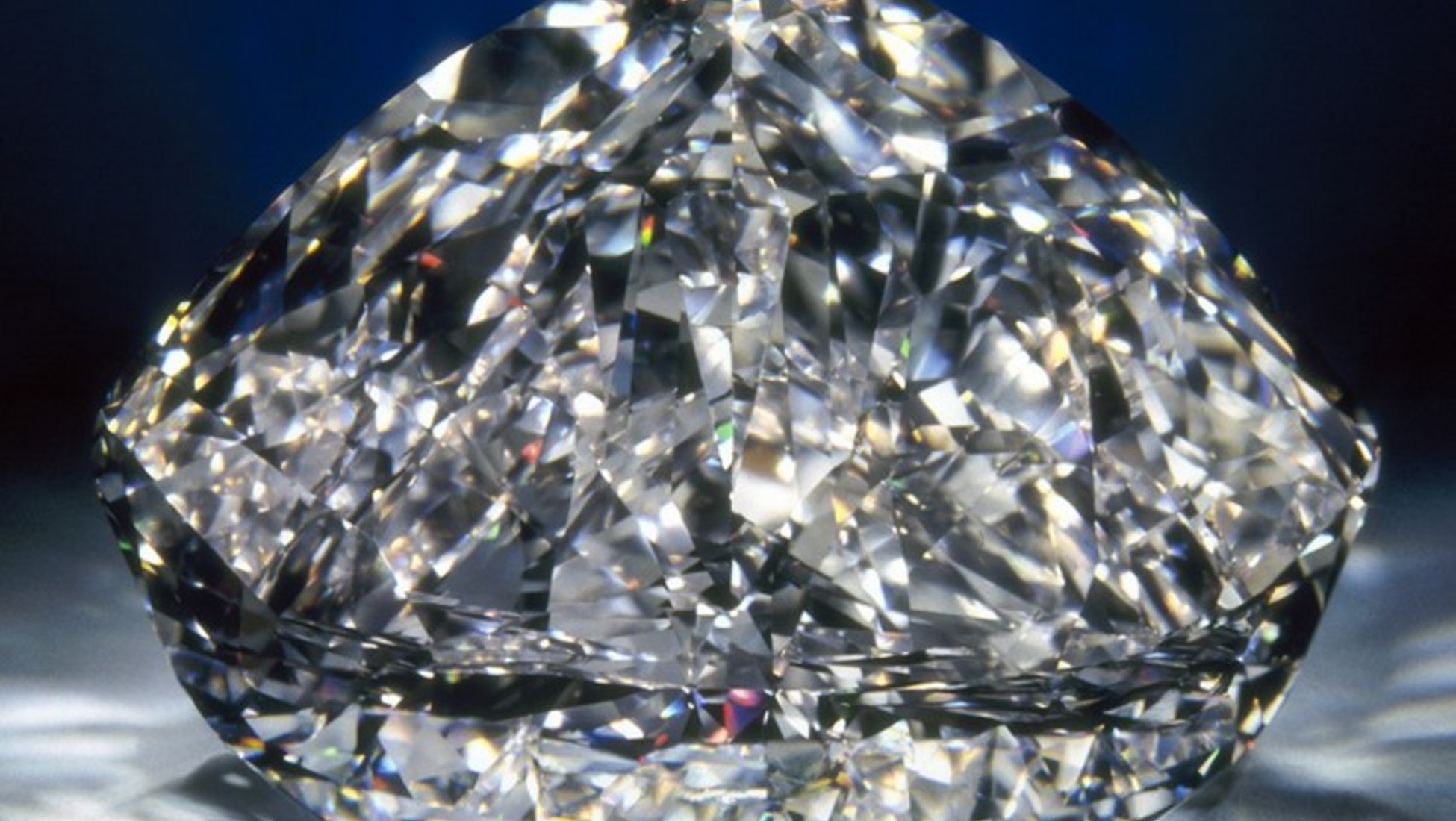 Before it was cut, this diamond weighed 599 carats

This mystical stone weighs 45.52 carats and shines in a beautiful blue, visible to the naked eye. If you look at it under UV light, it appears in a phosphor red. According to legend, the owners are said to be cursed. This stone would have been stolen from a Hindustan statue and cursed by a priest in revenge. It is safe to admire today at the Smithsonian Museum in Washington DC. 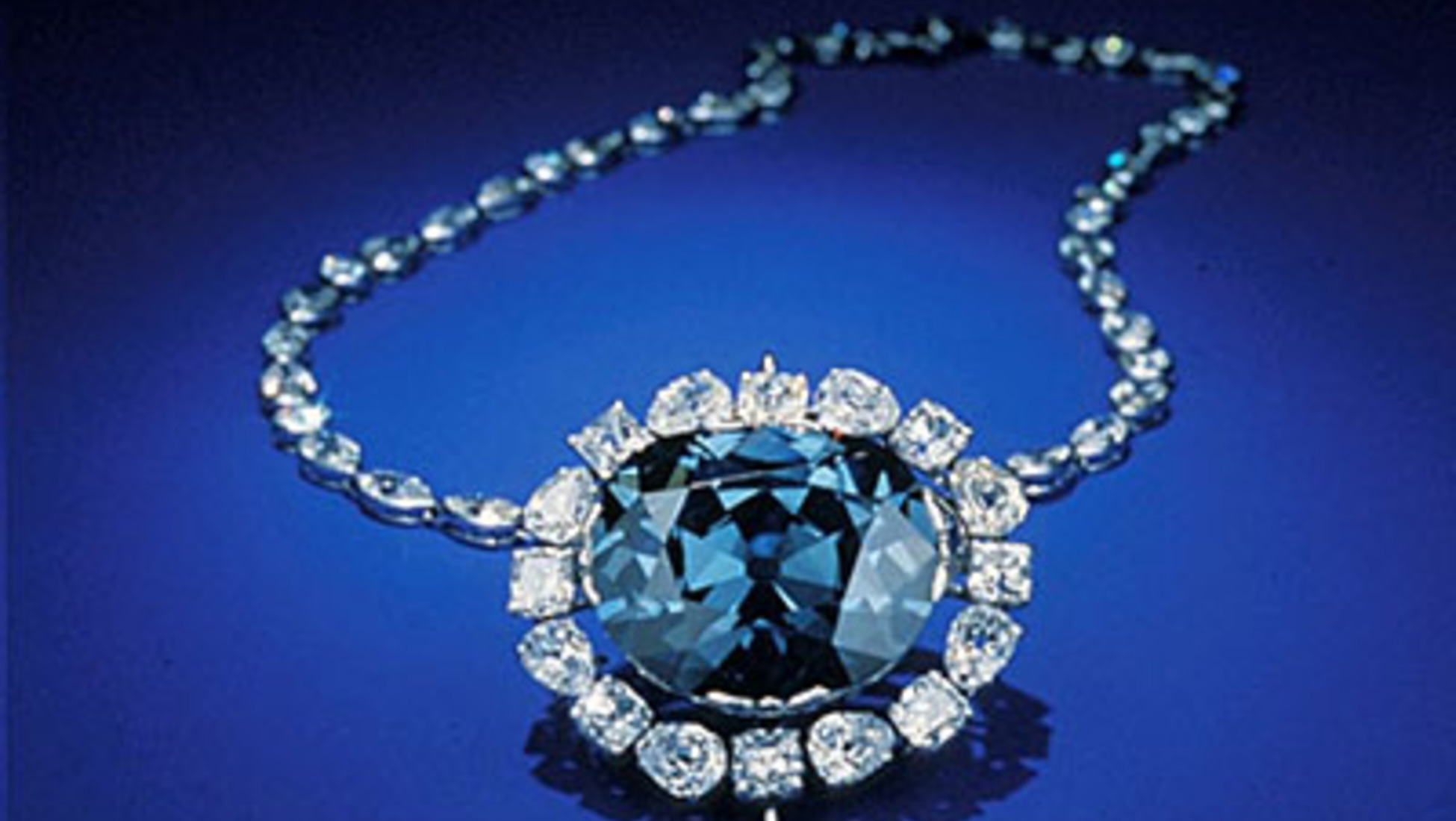 The largest unworked gemstone ever found. Even after the cut, it is still incredibly big. Due to its 530.2 carats, it was named "The great star of Africa". Currently this diamond is part of the British Crown Jewels. 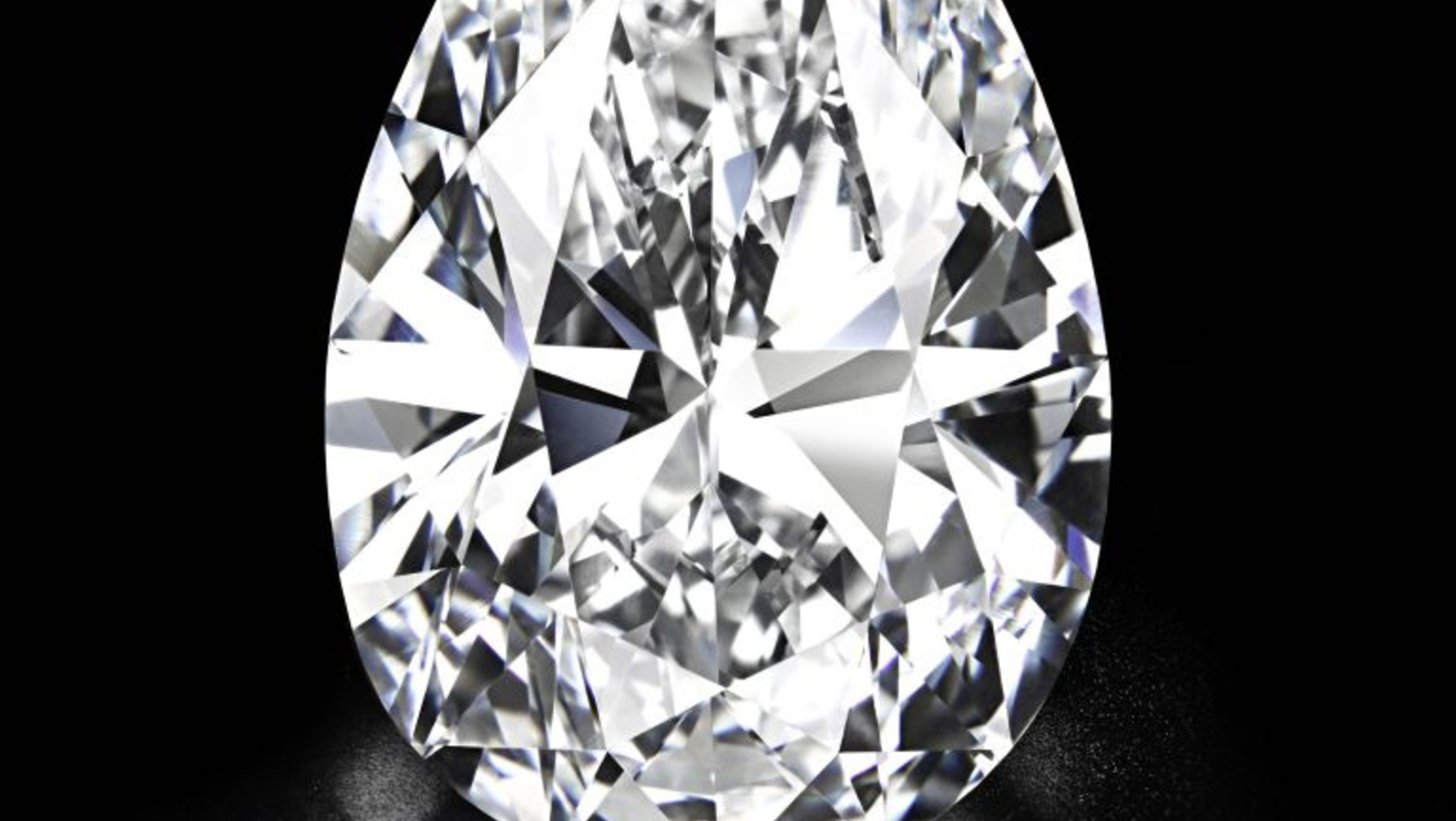 This diamond is also known as "The Great Star of Africa"

Today this gemstone is part of the French Crown Jewels and is in the collection at the Louvre in Paris. But this stone had many owners before. It was named after Nicolas de Harlay, the landlord of Sancy, a French soldier and diplomat from the 16th century. The pale yellow stone weighs 55.23 carats and is shaped like a shield. This diamond and its history are so rare that it is impossible to assess its value to this day. 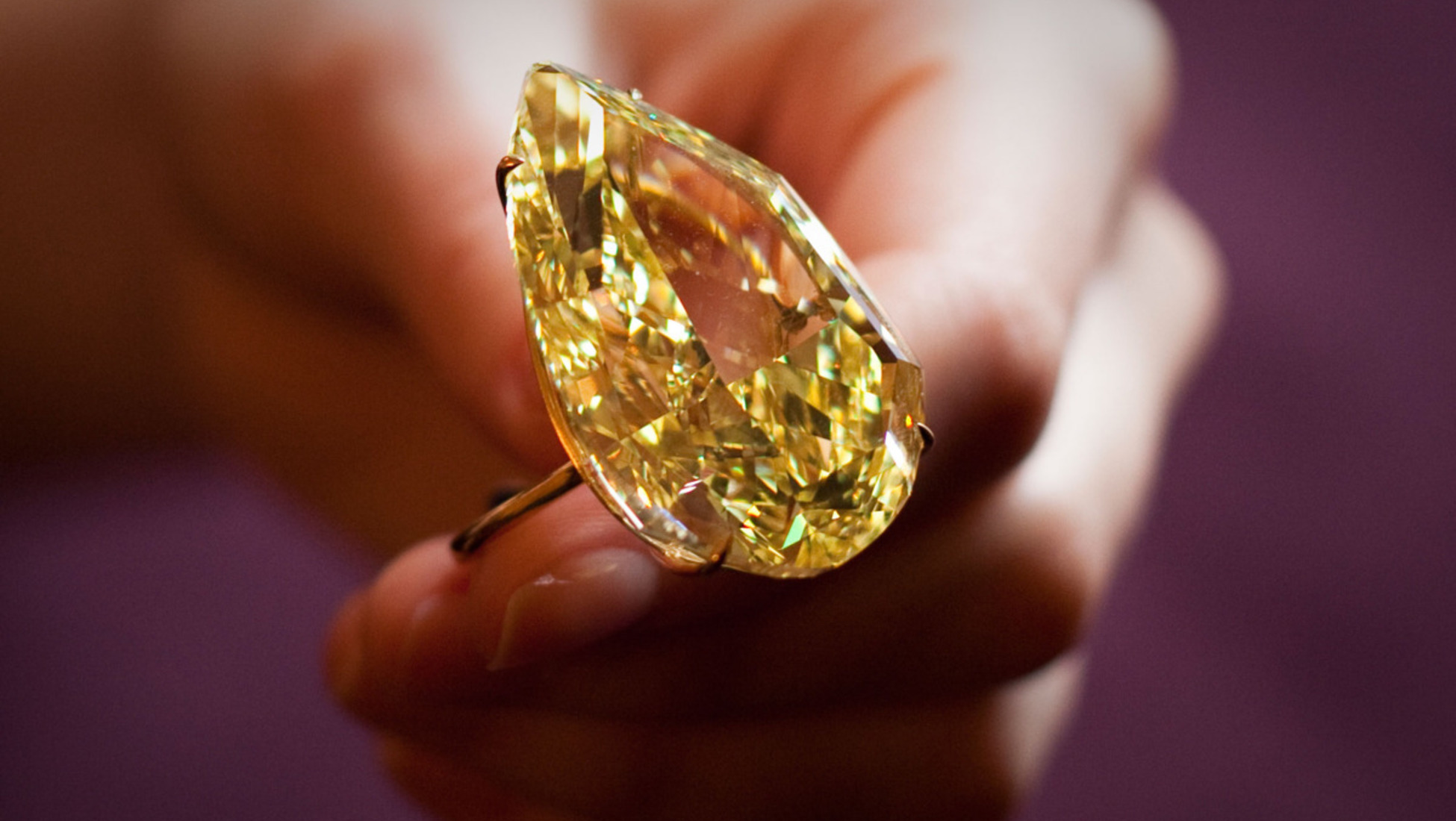 The exact value of the diamond has not yet been determined. Image source: Small Talks

This 105.6 carat diamond shines in the finest white and has been owned by many owners since it was discovered in 1294. Various rulers such as the Sikh from the Mughal Empire and Persia owned it and lost it again after various wars. In 1850 the Koh-i-Noor, translated "Mountain of Light", was confiscated by the British East India Company in Persia and is now the property of the British Crown. The exact value of the Koh-i-Nor diamond is unknown. Quiet voices, however, claim that its value is at least over a billion euros. 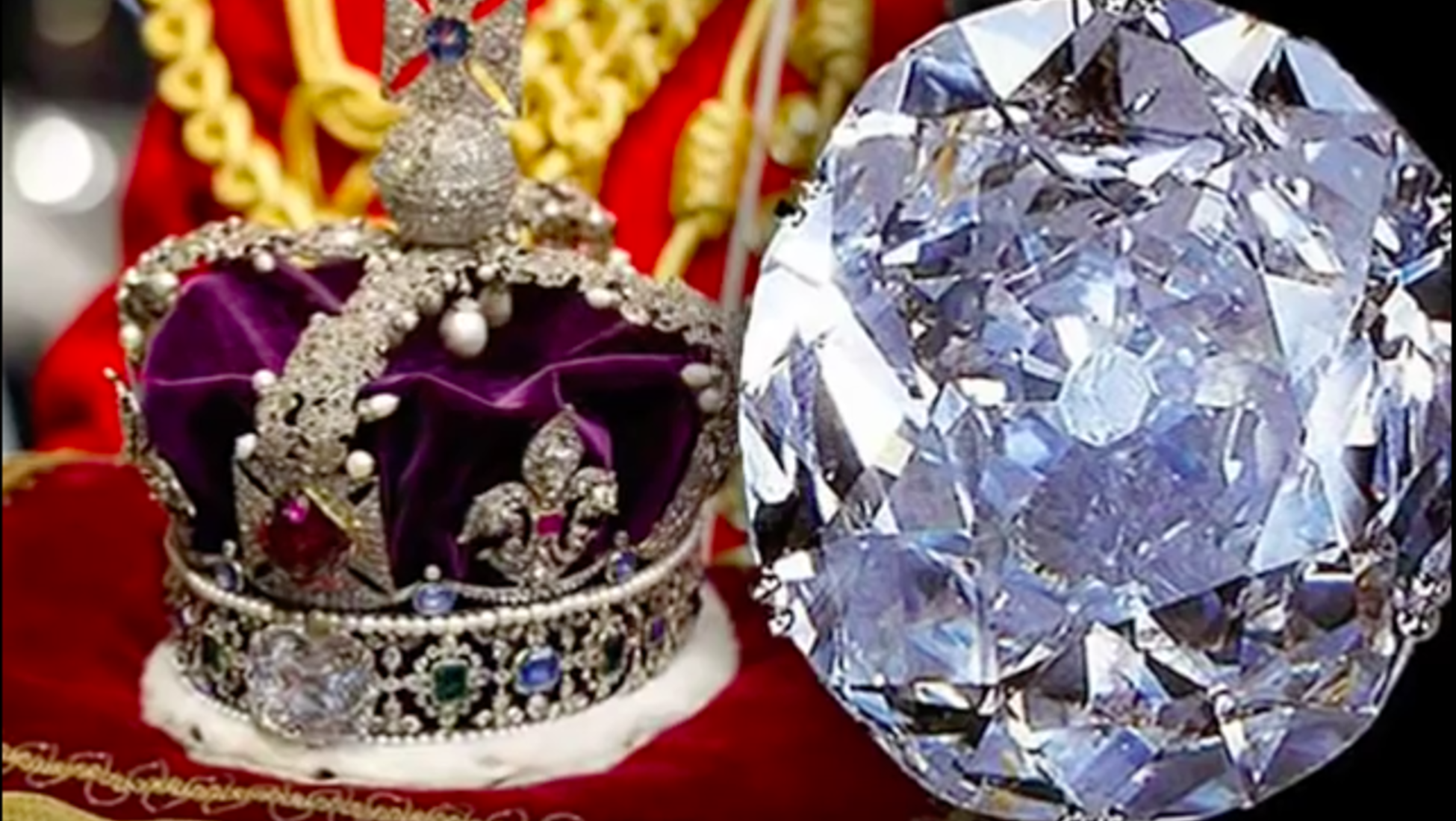 Rumor has it that this diamond is worth over a billion euros.

Check out our current Diamond auction at. You can too as a saleswoman Register here on Catawiki.

This is how you can tell whether a diamond is real

This is the story behind your birthstone

This is how women are changing the gem industry