Is creamy a texture or a taste

What is texture and why is it worth thinking about?

Texture is from more central Meaning for anyone who is interested in the subject of food with a minimum of passion.

Nevertheless, texture is a term that is rarely used in everyday life in connection with food.

Because it is generally unusual to judge food, for example a currywurst with french fries "Schranke", explicitly in terms of texture:

"Hey Jupp, the curry sauce is delicious and the crunchy texture of the fries goes perfectly with the soft, melting, yet firm sausage and the rich, creamy mayo."

This sentence will never be pronounced like that. And the eater may not consciously think that way either. However, his brain will make these thoughts subconsciously.

Because texture isn't just a catalyst for complexity and tension. It also influences our perception of taste and aroma.

What does the term texture mean?

The term "texture" is derived from the Latin word "textura" for fabric or woven material. While the term for woven fabrics means structure, feel and appearance, which is easy to understand, things are a little more complicated with food.

A look at the not necessarily catchy ISO standard for food texture only helps to a limited extent:

Food texture is "all the mechanical, geometrical and surface attributes of a product perceptible by mechanical, tactile and where appropriate visual and auditory receptors" (see International Organization for Standardization, ISO 5492).

On this basis, a simple definition that is suitable for practice is possible:

So far so good.

Why is texture important?

It is essentially important for our perception of food.

Imagine a fully ripe lamb's lettuce bursting with freshness. Five minutes before enjoyment, freshly picked from the field, which is managed strictly according to Rudolf Steiner. In addition a vinaigrette, conjured up by a master hand.

So texture is kind of important.

And there are three reasons for this:

Suddenly the soup isn't just delicious anymore - it's interesting. And for two reasons:

If that weren't the case, all components of a dish could be pureed. It doesn't take much imagination to understand how boring that would be.

Which texture we appreciate and which we reject depends largely on our cultural background.

Some textures, such as "crisp", seem to be perceived positively in all cultures. In this case, this may have something to do with the fact that crisp is associated with “fresh”. 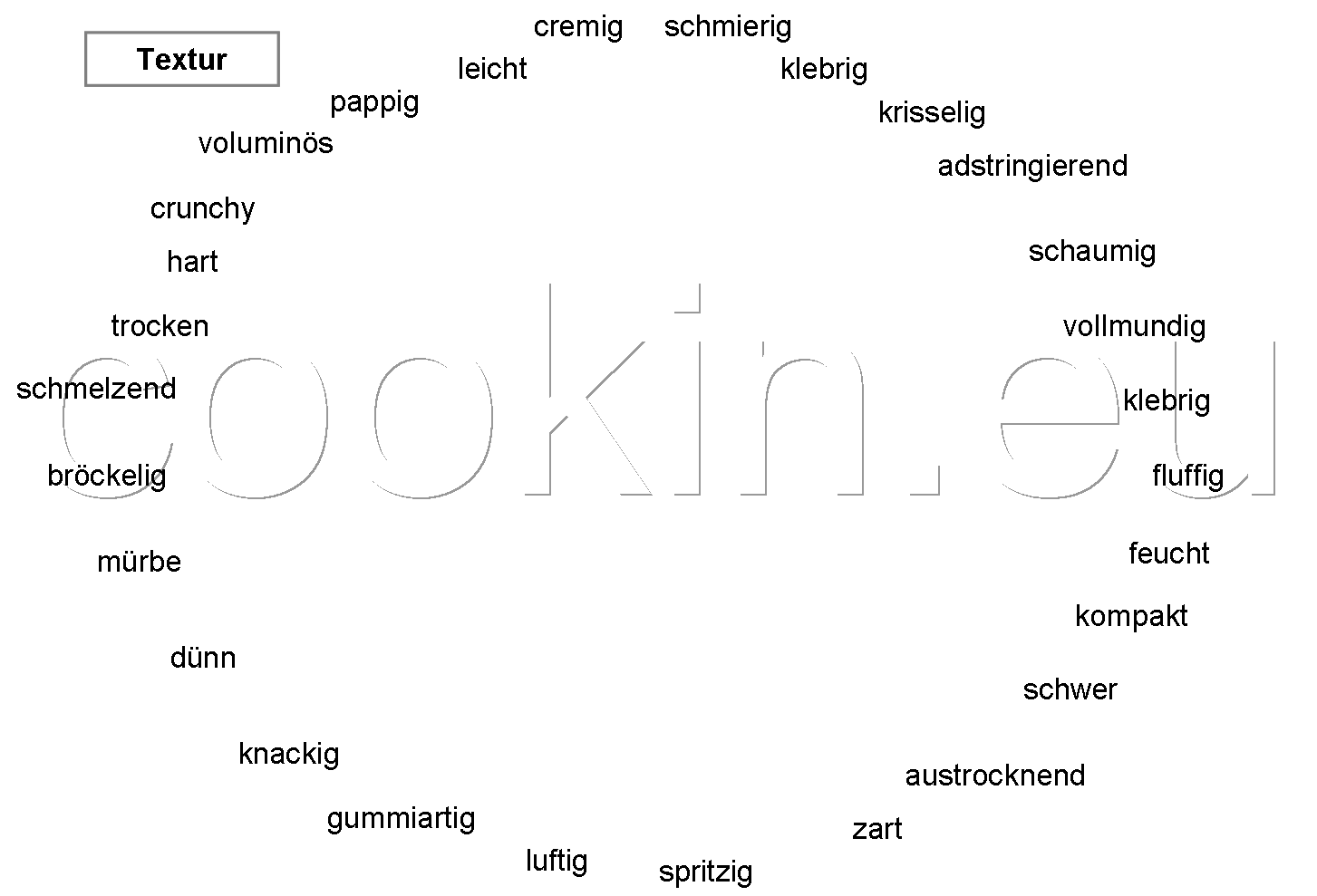 Other textures, on the other hand, such as sticky or slimy, are rejected in some cultures, but highly valued in others (cf. Chen, Engelen, 2012, p. 160).

There are general preferences in western societies:

• As enjoyable on the other hand, crunchy, crunchy, juicy, creamy and tender textures are perceived (cf. Szczeniak, 2002, p. 223).

3. Texture enables and influences the perception of taste and aroma

If we served our food and dishes exclusively pureed, no one would know what they were eating.

This is also due to the elimination of the possibility of visually identifying the food.

The texture still plays a crucial role. Because we can only identify food by recognizing familiar textures.

If you puree food or ready-made dishes, the rate at which the food is recognized by test subjects solely on the basis of taste and aroma drops by at least 40% (cf. Schiffmann, 1977).

For an experiment, scientists pureed white grapes, apples and lettuce.

Twenty-nine test persons were asked to assign the correct starting products based on their taste.

Only half of the subjects correctly identified the grapes and the lettuce. The white grapes have been identified as apples, cucumber, star fruit and gooseberries, among others. The lettuce, on the other hand, passed off as cabbage, carrot, beans, sugar snap peas, cucumber, avocado, spinach, and even grass.

The apple turned out to be the most difficult candidate: only 14% assigned it correctly. Here, however, the errors were far less scattered than with lettuce: most of the test subjects thought it was a peach (cf. Chen, Engelen, 2012, p. 160).

The problem becomes even clearer with industrially manufactured finished products, which are adapted to the smallest common “common sense” with the aim of maximizing profit and are therefore only seasoned carefully.

If you cook a ready-made pizza, a hamburger and any third ready-made meal to the optimum cooking point, puree all three very finely and bring them to the same temperature, it is hardly possible to blindly tell the dishes apart.

Because all tastes and aromas are "released" at the same time. What otherwise happens with a time delay due to the different textures, happens here in parallel and makes the solution of the task impossible for the test persons (cf. Vilgis, 2009, p. 15).

Texture - what does that mean exactly?

All Sunday questions at a glance.

Applause is the artist's bread!