What are the biggest misunderstandings about lumberjacks 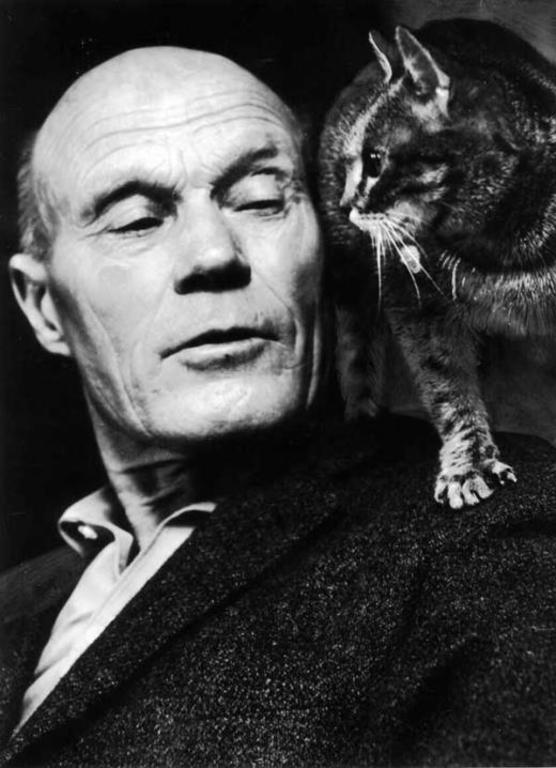 Tarjei Vesaas (1897–1970) was the eldest son of a farmer in Vinje / Telemark, whose family had lived in the same house for 300 years. Vesaas knew early on that he wanted to be a writer and toured Europe in the 20s and 30s. After his return to Norway, he refused to take over his father's farm in accordance with the tradition, in 1934 he married the poet Halldis Moren and until his death in 1970 he settled in his hometown Vinje on the Midtbø farm near his father's house. Vesaas wrote poems, dramas, short prose and novels that brought him international fame. He wrote his books in Nynorsk, the Norwegian language, which - unlike Bokmål, the more Danish-influenced "book Norwegian" - is based on Western Norwegian dialects. Away from the big cities, Vesaas created a highly modern, lyrically and precisely shortened work with enigmatic-symbolist features, for which he was nominated for the Nobel Prize several times. His greatest masterpieces are "The Ice Castle", for which he received the Nordic Council Prize in 1964, and "The Birds", which Karl Ove Knausgård described as "the best Norwegian novel ever written".

Hinrich Schmidt-Henkel, born 1959 in Berlin, translated from French, Norwegian and Italian, among others. Works by Henrik Ibsen, Kjell Askildsen, Jon Fosse, Tomas Espedal, Louis-Ferdinand Céline, Édouard Louis and Tarjei Vesaas. He has received numerous awards for his work, including (together with Frank Heibert) with the Straelen Translator Award of the Kunststiftung NRW and most recently in 2018 with the Royal Norwegian Order of Merit.

Tarjei Vesaas (1897–1970) became immortal with two masterful novels: "The Ice Castle" and "The Birds". In »The Birds« he tells of the outsider Mattis, who has withdrawn into a childlike inner world and is laughed at by the other villagers for being left behind. He tries to earn a living with small labor in the fields and in the forest. Mattis lives in a hut by the lake with his sister Hege, who runs the house and looks after him, and he feels connected to the surrounding nature. He is particularly drawn to the woodcock, whose spring courtship flight he sees as a sign, as a promise that he cannot decipher. When the woodcutter Jørgen shows up one day, falls in love with Hege - and then a snipe is shot, Mattis is thrown off course.

In economical, haunting language and unforgettable images, Tarjei Vesaas describes the inner life of the eccentric Mattis and his view of the world, including his inability to express himself and to communicate with other people. Vesaas inserts the unsaid between the lines, the basically unspeakable, into the fine web of the narrative in a unique, unmistakable way, thus creating poetic tension and an absolute sympathy for Mattis. Hinrich Schmidt-Henkel knows how to recreate the nuances, omissions and shortages in the German translation in an almost magical way and to bring the story so close to us with its very own melody that we have nothing left but the novel and its main character Mattis deep to close to the heart.

»A quiet, graceful novel that Tarjei Vesaas, who died in Norway in 1970, presented in 1957 with The Birds. (...) The fact that the hermit nature can emerge vividly in front of the inner eye of the readership is also thanks to the successful translation into German. You can let yourself fall into the scenery. But she doesn't have a happy ending, especially not for the hero. Instead of kitsch of salvation and cheap happy endings, there is existentialism in its purest form. "

“Mattis is a constantly brooding observer of the monotonous existence. Feel things that no one else feels, see things that others are blind to, attach importance to everything. Like a poet. (...) Meanwhile, we are amazed at the ease with which Vesaas sets his motifs, the shortened language, and notice how the increasingly emotionally charged events creep under our skin. "

»In the novel› The Birds ‹, the Norwegian author Tarjei Vesaas tells a disturbing story about misunderstandings, speechlessness and the rumbling need for love and belonging. A chamber piece with unequal siblings and their unequal motives for being tied to an existence from which it is impossible to break out. (…) We are grateful to Guggolz Verlag and the translator Hinrich Schmidt-Henkel that ›Die Vögel‹, one of the greatest works in Norwegian literature, has now been made available to German-speaking readers. "

“Countless books that should blush before this profound novel, but not because of its profundity, but because of the sheer clarity with which it deals with the most powerful things. The greatest things, as you can already guess, are not big, but small. But essential. (...) Vesaas ’language and Mattis’ reflections on life shine and are mostly crystal clear and only the second, sometimes also darkly entwined. The new translation by Hinrich Schmidt-Henkel is sensationally calm and as informal and (almost) timelessly classic as one imagines the original. "

»A great novel about a person who cannot find anything profane in the world and who also leaves the reader as if hypnotized at the end. The highest narrative art from the calm waves at the beginning to the final storm. "

“Vesaas manages to grope his way into the fool's head. To show him in his vastness and his confinement. In his otherness. (…) If Mattis is sad, then he is sadness. If he's scared, then he's scared. If he is happy, then he is joy. Sometimes he only says half sentences that are unsteady in the air. But thanks to Vesaas ’storytelling, we understand him, we can follow him, we can sense the path that the words take through the tumult of his head."

»The mythically shortened, dialectic New Norwegian Vesaas' is in good hands with Schmidt-Henkel. It precisely reproduces the narrator's tone of voice, which, despite its simplicity, flickers like the play of light and shadow in the forest. A note is struck, breaks off, and reverberates. Half-sentences collide irreconcilably. The unspoken rises to the unspeakable. That is strong and beautiful. Poetic and seductive. "

»The Norwegian Tarjei Vesaas, a great man in his home country, is virtually unknown to us. Wrongly, as his novel ›The Birds‹ shows. (...) Vesaas writes a swinging, atmospherically dense prose, which is also convincing in the translation. «

»In› Die Vögel ‹we as readers always stay in the wild and at the same time so delicate inner world of the protagonist. It is a literary feat that we like to follow the daydreamer and bird whisperer, however bizarre their experiences may be. His thoughts, it is said at one point, 'were ungovernable'. (…) Each page confirms the feeling that it is a great novel, also because the text knows how to vary central motifs of literary modernity with virtuosity and in an unmistakable style. (...) The novel succeeds in encircling these moments of the inexpressible with an empathic relentlessness, as if the writer Vesaas were a literary bird who observes people from a close distance and experiences them completely differently than we think we know them. "

»One reads this novel in part as if one were walking through a museum and tracing stored experiences: Human life was so sparse and cramped two or three generations ago. Again and again one is reminded of the everyday, wondrous miracle of reading: One feels drawn into a story, soon entangled in it, which takes place around characters that are very far away and yet completely foreign to one (... ) How nice that Guggolz-Verlag, which published ›Das Eis-Schloss‹ last year, has given you the opportunity to discover this author. "

»› The Birds ‹can be read as the self-portrait of an outsider who has turned away from civilization. It is the story of Mattis, who lives with his sister Hege in the Norwegian provinces and is considered mentally retarded by the outside world, told in an unspectacular, but highly descriptive and atmospherically charged language. He is viewed as a mixture of ridicule and aloof benevolence. But in his head, Mattis is way ahead of those around him. (...) Hinrich Schmidt-Henkel, one of the most accomplished translators of our time, reports that he had to use everything he had learned in 30 years for his work on ›Die Vögel‹. It was worth it. ›The text is glowing‹, writes Judith Hermann in her epilogue. «

“Everything about this book is just right. A great literary text in a great translation, wonderfully designed and provided with an illuminating afterword. It's the book of the year. "

»It is timelessly beautiful prose that Schmidt-Henkel sensitively translated into German: The story is told sparingly, in simple, sparse language, and yet this language leads us into the complex emotional world of Mattis, who was frozen in his adolescence. (...) There are no psychologizations with Vesaas, but with him all shades of human longings, abysses and forlornness can be found. "

»What a rediscovery: (...) You sink into this peculiarly wild book - brilliantly translated by Hinrich Schmidt-Henkel - is so woven into Mattis' finely-nerved confused world that you look a little dazed at reality when you emerge reading. " 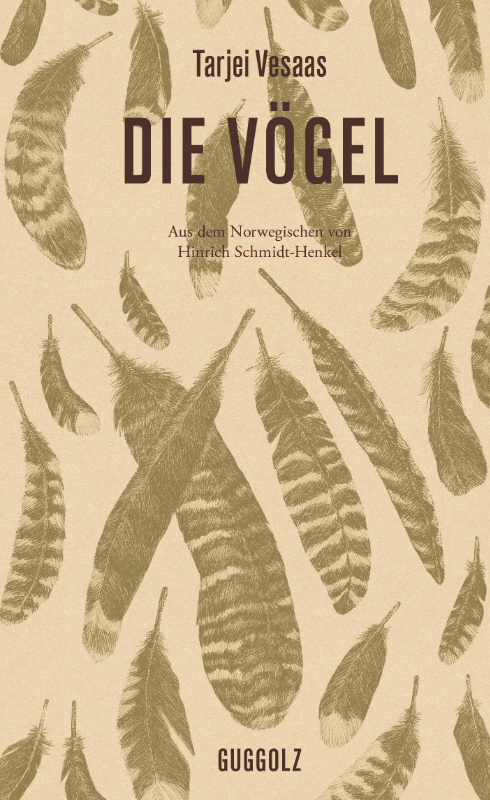