An overview of the temperate climate zone

Within these types of climate, the characteristics of the annual temperatures and precipitation change decisively with increasing distance from the sea. As a rule, the average temperatures from the maritime climate to the continental climate (land climate) decrease, the temperature fluctuations (amplitude) increase and the total precipitation decreases.

Plymouth lies in the maritime climate of the west sides. The temperatures are moderate and show only a relatively low amplitude over the course of the year. The precipitation falls in the maritime climate v. a. in the winter. This climate is influenced almost the entire year by the extra-tropical westerly winds that bring precipitation from the ocean. 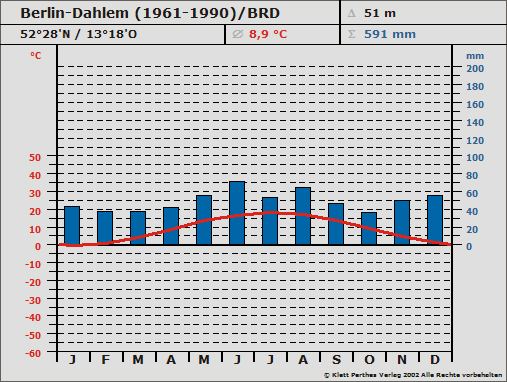 In Berlin, the temperature amplitude (18.3 K) is already more pronounced than in Plymouth (10.2 K). Precipitation is also lower. Berlin is in the transitional climate, which forms the flowing transition between the sea and land climate. 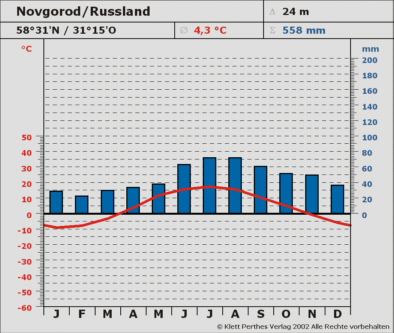 In Novgorod the winter is significantly colder compared to Plymouth and Berlin, while the summer maximum temperature is similar. The precipitation falls here more often in summer. Novgorod is located in the cool continental climate. 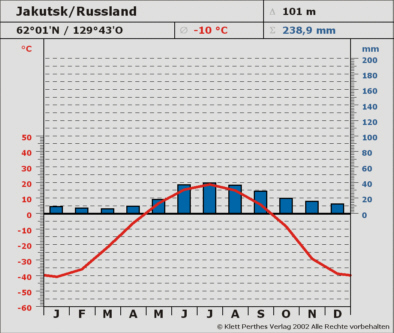 Yakutsk is also in the cool continental climate. But the temperature amplitude here with 59.6 K is considerably larger than in Novgorod with 26.5 K. Although the total precipitation is lower, most of the precipitation falls in the summer, as in Novgorod. The cool continental climate shows, despite large differences within the climate type, overall low January temperatures and thus a large temperature amplitude as well as low precipitation, which is more frequent in summer.
The transitional climate only occurs in Europe. It does not exist in North America, here the maritime climate on the west side is separated from the continental climate by the mountains (including the Rocky Mountains) running in a north-south direction.

The changes in temperature just described with increasing distance from the sea are caused by the different heat storage capacities of water and land mass. The water can better store the incident radiation. So it absorbs energy in summer. If the energy balance turns out to be negative in winter, the sea gives off heat and thus causes relatively mild temperatures in winter. In summer, however, the sea air has a cooling effect.
However, the land mass can hardly store any energy. It cools down very strongly in winter and thus causes the low temperatures in the continental climate. In summer it heats up enormously and thus ensures high temperatures.
The moisture that the extra-tropical westerly winds bring is only sufficient for the regions that are close to the sea. The remote regions (land climate) therefore have lower amounts of precipitation. However, the summer precipitation is higher here, as the strong warming and the rising of the warm air causes a strong convection with subsequent precipitation.
In the temperate climate zone, the location of the place strongly determines whether the climate is oceanic - influenced by the sea - or whether it is determined by the insufficient heat storage capacity of the land mass, i.e. whether it is continental.
These changes from west (maritime climate) to east (continental climate) are called continentality.

Change in vegetation with increasing continentality

Just as the climate changes with increasing distance from the sea, so does the vegetation. In the area of ​​the maritime climate of the western sides there are deciduous forests that shed their leaves in winter and are therefore only summer green. With increasing continentality - the further away you are from the sea - there are also more conifers. There are mixed forests in the transitional climate. Pure coniferous forests exist in the cool continental climate, these are known in Russia as taiga and generally as boreal coniferous forests. Due to the short summers of the rural climate, it is too energy-consuming to develop leaves.

The east side climate 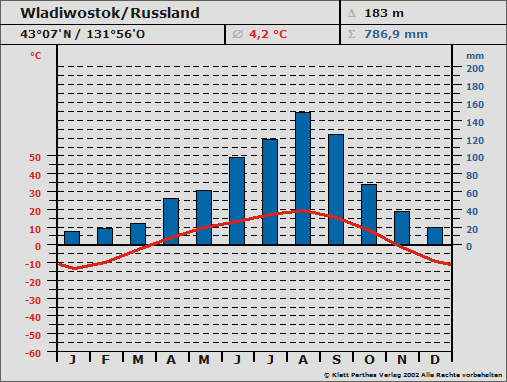 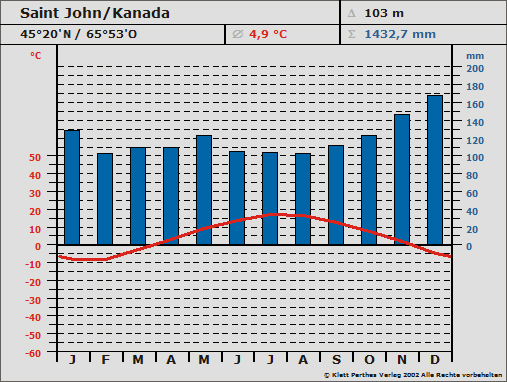 The east side climate is now by the sea again, so the temperatures here are more balanced than in the continental climate. The east side climate in North America (e.g. Saint John) has high rainfall all year round. In East Asia (e.g. Vladivostok) there is often increased rainfall in summer. The reason for this is the strong summer warming of the Asian land mass, with a heat low forming. This not only causes strong convection, but also "sucks" winds in, such as the tropical southwest monsoons in South Asia or the extra-tropical southeast monsoons in East Asia. This southeast monsoon absorbs moisture over the Pacific and causes high summer rainfall in East Asia.
Depending on the extent of the annual temperature and the precipitation, there are mixed forests, steppes or tundras in the east side climate. 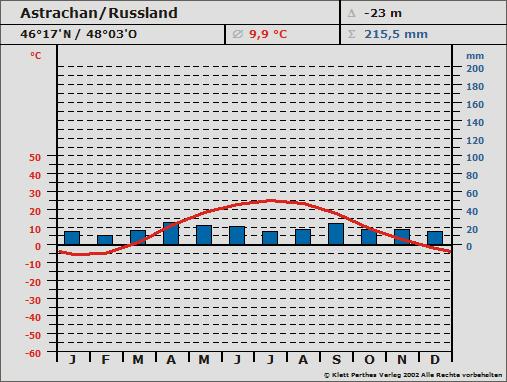