How can a person identify a thief

One careless moment and something disappears in your pocket. Small and expensive goods are a perennial favorite with thieves. Far too often, stolen goods in retail find their way into other people's pockets and thus cause enormous damage to retailers. According to the Cologne trade research institute EHI, almost half a billion VAT losses are caused by shoplifting year after year. In addition to competition from e-commerce, brick-and-mortar retail also has to contend with the customers themselves. But there are measures to effectively protect shops and sales rooms. Protection begins with the shop design.

How thieves get their prey in retail

They are feared by retailers: shoplifters who use increasingly uninhibited tricks to grab stolen goods. This results in damage that the shop has to pay out of pocket. All in all, this petty crime is increasingly damaging to business. The procedure of thieves is becoming more and more perfidious in order to smuggle products out of the shops for unpaid. But what do shoplifters actually steal? Small, easily transportable, expensive goods such as cosmetics, electrical goods, razors, perfumes, jewelry and much more are almost always particularly popular with perpetrators. The most frequently affected are drugstores or self-service department stores. Successful perpetrators exchange ideas in internet forums and reveal their most successful tricks to those interested in stealing expensive goods.

There is that classic, in which the stolen goods are simply put in the pocket, backpack or bag or transported out of the shop under loose clothing. This scam is particularly successful in overcrowded shops or on busy business days, which is why special attention should be paid to possible perpetrators in a lot of day-to-day business.

Klauf is a neologism that is often used in the scene: It means that you put part of your purchase on the conveyor belt at the checkout and pay for it, but keep more expensive goods in your pocket. The purpose of the distraction in the buying process is to distract the cashiers from it.

The variant of the Lefthanding, in which an everyday object such as an umbrella, a skateboard or a laptop is carried as a privacy screen in the hand that is turned away from the cash register. Behind it, the perpetrators hide small stolen goods from spontaneous purchases.

A Large group theft requires, as the name suggests, several accomplices and precise preparation. While a few members of the group of thieves are already positioning themselves in the shop, two perpetrators come in later and start a loud argument. This spectacle serves as a diversionary maneuver while the rest of the group can fill their pockets and then quickly run away.

Characteristics of shoplifters - How to spot the culprit

There is good news for shopkeepers: the trained eye will recognize shoplifters immediately! With a little practice, thieves can be deliberately withdrawn from circulation. Many shoplifters are occasional offenders who often commit unplanned theft for the first time. Distinctive features are

The distinctive features of a shoplifter show that the perpetrators use gestures and facial expressions to reveal themselves far too often in their predicate offense behavior. The clothes of a thief in the shop can also give clues to a possible crime: gloves in summer, pulled up collars or heavy, wide jackets, even though it's pleasantly warm? That can seem strange. For example, employees can check whether the clothing is appropriate for the time of year, whether the clothing is suitable for the current weather, or whether the clothing combination is simply completely unsuitable. Of course, these characteristics cannot be applied to all groups of perpetrators and are only used as an assessment option. 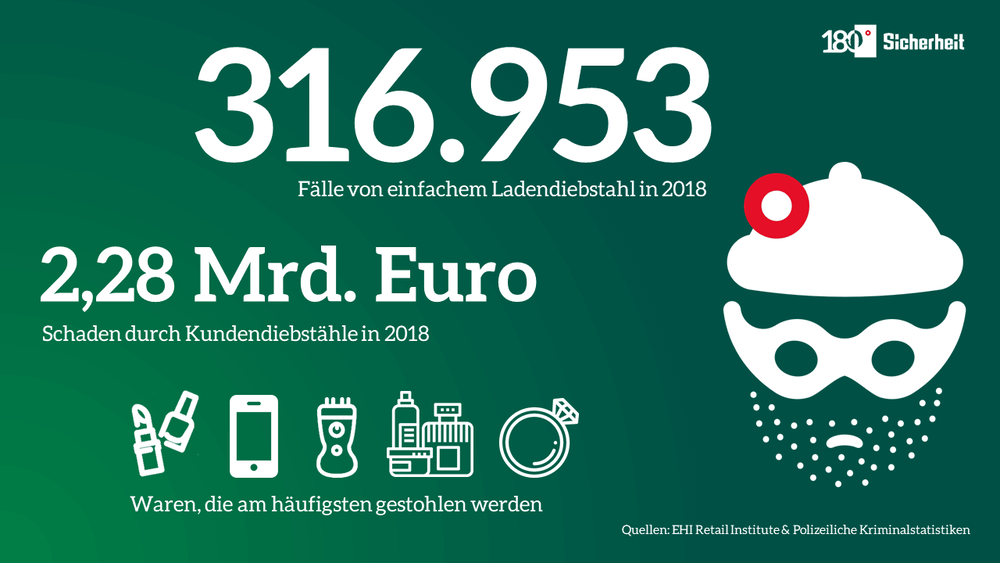 A good instinct and an open eye in day-to-day sales can help. But there is more that can be done. Theft protection can already play a role when considering how to set up and design your shop. Theft can be prevented with a clever store design.

With measures to secure goods you increase the protection against theft even more. Various measures can be used to prevent theft in a targeted manner or to make the goods unusable for the perpetrator.

Probably the simplest method is to attach the goods to the shelf so that only an authorized employee can release the lock. In electronics retail in particular, the so-called Kensington lock is used to protect mobile goods from unauthorized removal. There are technical possibilities here, for example with so-called RFID labels that are attached to the goods. These work with radio identification. In the textile trade in particular, chemical article security devices are used which, if the security device is incorrectly removed, paint or smell foul-smelling substances on clothing.

Securing goods, however, begins with the labeling. Labels should therefore always have a precisely defined company code and at least the name and address of the company. This makes the assignment of stolen goods easier later. A simple label with a price is too easy to replace. Even if many, especially small shops, still work with it, this type of product labeling does not offer any tracking options in the event of theft.

Shoplifting Protection - That Can Be Done

If you want to operate sensible theft protection, you have to organize it preventively and not only after it has already been stolen. Shop design and goods security are complementary methods, but it makes sense to equip yourself with technical and mechanical security measures.

Caught in the act - legal situation, consequences and penalties for shoplifting

Legally, shoplifting is considered to have been committed from the moment the thief has pocketed the goods. The perpetrator is assumed to be of clear intent. If a shoplifter has been caught in the act, the Criminal Code applies with Section 242 of the Criminal Code. Accordingly, shoplifting is classified as a misdemeanor, not a crime. It also stipulates that a judge can impose a fine or imprisonment of up to five years for completed shoplifting. In the case of juvenile offenders, social hours are also possible as a punishment. Especially important for group theft is Section 25 (2), which clearly stipulates that each perpetrator receives the sentence individually. The penalties that are imposed depend on various factors. Here it also depends on the seriousness of the act and is at the discretion of the court.

For shopkeepers it is of course interesting how they can proceed if they have observed a shoplifting and caught a perpetrator. First things first: caught in the act, the thief may first be held tight. However, this so-called “provisional arrest” presupposes that the theft was actually observed. The employees of the shop have the right to check the pockets of the alleged perpetrator. If the offense is then confirmed by the goods found, the managing director can file a criminal complaint and at the same time file a criminal complaint, which signals that the offense should also be prosecuted. In addition, the affected dealer can pronounce a house ban for the thief. If he violates this, he is liable to prosecution, because then the so-called trespassing exists.

Shoplifting in retail stores is still not a trivial offense. The perpetrators are becoming more and more perfidious in their approach. But if the employees keep their eyes open in their day-to-day work, shoplifters can often be identified by their predicate behavior: unsafe movements, frequent looking around, scrutinizing glances at the employees. But shopkeepers can take preventive measures in advance. With a strategic store design and an innovative article security one can already counteract thieves. But electronic measures such as an alarm system with recording video surveillance or mechanical security systems also make a significant contribution to preventing shoplifters from doing their job.