How much debt should the US have?

US debt at record high

The current status shows the US debt clock at the beginning of this page. With this highest debt level, the United States is, as in previous years, number 1 in the world in the dubious ranking of the most heavily indebted countries.

This means that the US debt still has only one way to go: up. This clearly shows the historical development of the US national debt:

Development of national debt in the USA

If you divide $ 27 trillion in debt by 328 million people, the current US debt per capita is $ 82,317. In relation to the state, every US citizen theoretically owes over $ 80,000 in debt, not counting private debts at all.

The dollar is the world's leading currency. Nobody can foresee the consequences of a permanently growing US debt in this country as well. If the prospects are too uncertain for whom, physical gold is recommended to secure assets. Depending on the personal situation, experts recommend a share of 5-15% in the asset portfolio.

The total debt of all US states in 2020 was $ 3,157.0 billion. This figure includes "US State and Local Government Gross Public Debt", ie debts at the state level ("state debt") and debts at the local level ("local debt")(2). 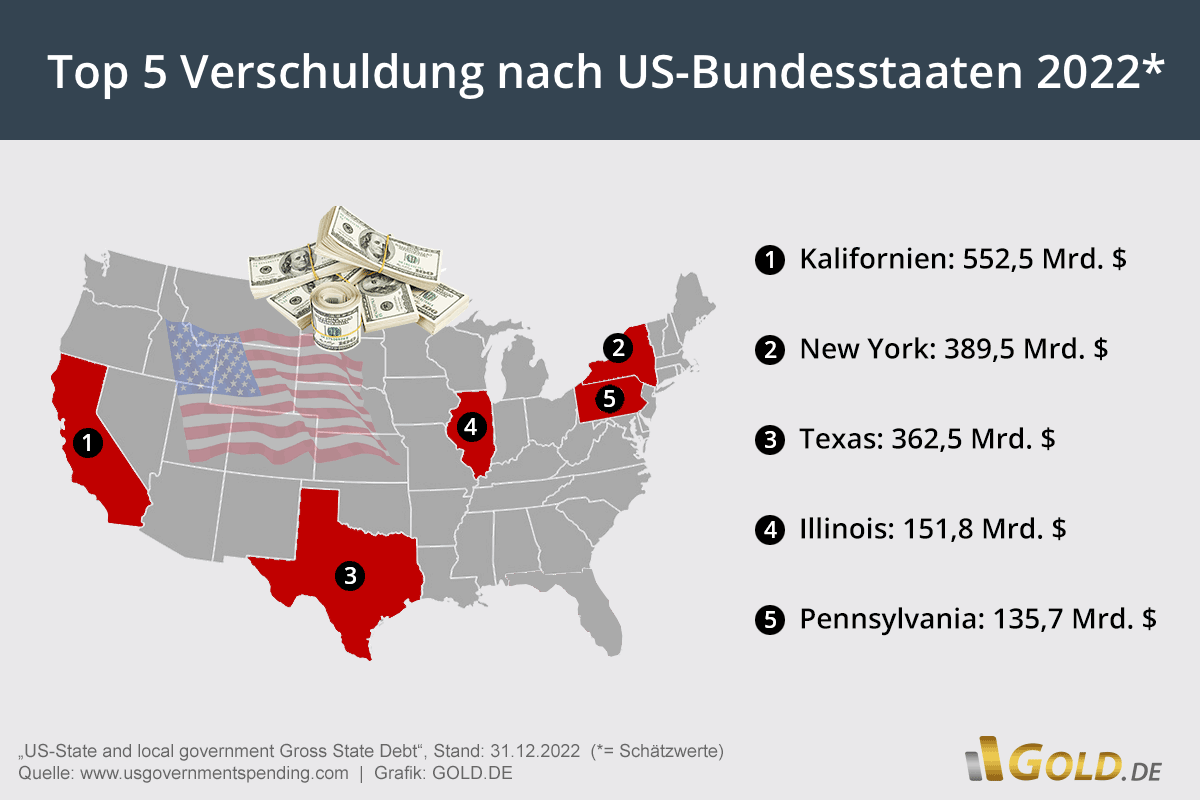 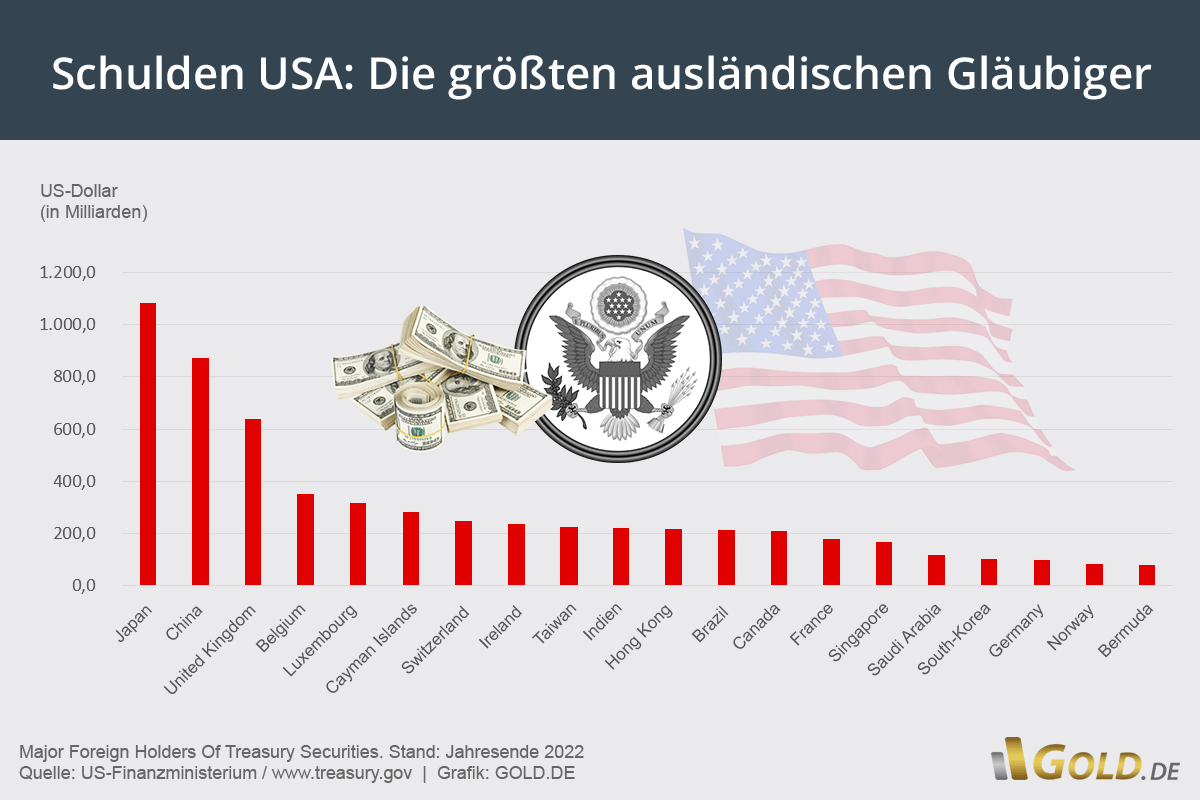 Largest creditors in the US

The creditor ranking in the middle places is also interesting. At the end of 2020, there were some smaller countries such as Ireland, Luxembourg, Switzerland or Cayman Islands. In other words, smaller states that are considered important financial centers. In the ranking of the largest foreign creditors, Germany barely made it into the top 20 with 75.4 billion dollars. The numbers in detail:

Ranking of the largest creditors in the USA, as of the end of 2020

What does US national debt mean?

US national debt means all federal debt. In other words, money that the US state borrowed from third parties. This is usually done through government bonds. If the US state sells such a bond, it gets money for it. But the state has also got into debt, because it is obliged to pay the creditor back the money. There are fixed terms for this. In addition, as the debtor, the US state has to pay interest to the creditor, similar to a loan. Interest is the price, so to speak, of the risk a creditor takes in lending his money. That is why bonds are also called interest-bearing securities. The interest rates are higher, the worse the creditworthiness, i.e. the solvency, is assessed.

So the US national debt is the total claims of all lending creditors on the federal government in Washington.

Who does the US owe?

Anyone who owns a US bond is a US creditor. Creditors can be private individuals or institutional investors. You can be based in the United States or abroad. Institutional investors are mainly banks, insurers, pension providers and other countries. They hold the majority of US Treasuries. The US central bank, the Federal Reserve System, is also one of the US creditors.

It doesn't matter who sits in the White House

Whether Democrat or Republican: As recent history shows, US debt is growing regardless of which president is currently in power in the White House. Trump created more new debt record highs. That will not change for the time being, even under President Biden.

What does the current US debt level mean?

The state is leading the way, the people are imitating it: The USA is not only world class when it comes to national debt. Americans are also world leaders when it comes to personal debt. Whether students, home builders, credit cards, car or consumer loans: According to the Federal Reserve Bank New York, US citizens also live on credit privately. Mortgages account for the largest share of private debt.

It is precisely for this reason that many economic experts are particularly critical of the US debt. They believe that debt should be better taken out in order to invest in the future, for example in education or infrastructure. However, the US debt is strongly consumer-oriented, and therefore not investing enough.

There is currently no end in sight to debt growth. The USA is one of the countries where the debt will continue to rise. IMF experts assume that the US national debt ratio will also continue to rise. It is also unclear what influence the Corona crisis will have.

What are the possible consequences?

Paying off debts by taking on new debt is not uncommon. The danger is when interest rates rise. Then the mountain of debt grows. If economic growth does not keep pace, then more debt must be incurred for the sole purpose of reducing debt. The issue can become even more explosive because the dollar - still? - is the world's reserve currency.

Interest rates can also rise if creditors withdraw their trust in the US dollar. If the money from abroad is not enough to cover the interest, tax money could be used. The consequence would be an austerity policy to the detriment of the population.

Another consequence can be that the central bank (in the sense of the state) tries to "inflate away" debts by pursuing a policy of currency devaluation. Because if money loses value in the long run, this tends to favor the debtor. Central banks have various instruments at their disposal to implement such a monetary policy, such as increasing the money supply. It is impossible to foresee what consequences an inflation of the dollar will have on trading in US government bonds.

A special feature in the US system is the so-called Government shutdown. This can be imposed if the treasury is tight or the legal basis for the approval of budget funds expires. Many government agencies are closing down and civil servants are being sent on unpaid leave. In fact, it happens quite often. Whether Jimmy Carter, Ronald Reagan, George H.W. Bush, Barrack Obama or Donald Trump: there are enough examples of this in recent US history.

Book tip: "The crash is the solution!"

The Spiegel bestseller by Matthias Weik and Marc Friedrich. Why the final collapse is coming and how to save your fortune.

If one looks at the historical development of the US national debt, it is noticeable that in the beginning the debt rose particularly sharply, especially during war phases. With the start of the financial crisis in 2007, the dynamism of debt growth increased again.

Phase 1: Founding period until the end of World War II

The first significant increase arose to finance the British-American Wars in 1812. As a result, however, this mountain of debt was almost completely reduced.

The development during the American Civil War from 1861-1865 was similar. After the Civil War ended, it had $ 2.7 billion in debt. In the following years, the deficit was reduced by about half again through budget surpluses.

The US national debt reached a preliminary high of $ 25.5 billion after the end of the First World War. But here, too, it was possible to repay around a third of the debt in the following years.

The period of economic depression followed in the 1930s. As a result of the economic crisis, tax revenues fell and social benefits rose at the same time. The drastic spending for World War II eventually culminated in an increase in the debt burden to a total of $ 251 billion in 1945 (112% of GDP).

After the end of World War II, a phase of relative calm followed, during which the USA advanced to become the world's leading economic power. The USA also became a major creditor nation, holding bonds from numerous European countries. Particularly noteworthy is the Bretton Woods Agreement, which was passed in 1944 and created a world-wide monetary system with the dollar as the world reserve currency. In addition, the value of an ounce of gold was set at $ 35. So the Bretton Woods Agreement was a kind of global gold standard with the USD as an anchor. During the Bretton Woods era, US real debt continued to decline.

In 1973 the Bretton Woods system collapsed. A deficit in trade, the threat of inflation at home and fear of a run on gold reserves had prompted President Nixon to close the "gold window". Dollars could no longer be exchanged for gold. In 1973 the national debt was $ 466 billion; with the end of the gold bond the door was wide open to continuing indebtedness from then on.

In the 1980s and 1990s, debts rose sharply as a result of the neoliberal policies of Presidents Reagan and H. W. Bush. Only President Clinton managed to temporarily turn the national deficit into a surplus. Clinton was followed by the next US president from the Bush dynasty, George W. Bush. During his tenure, the attack on the World Trade Center fell in 2001 and the global financial crisis, which began in 2007 as the US real estate crisis. Counter-terrorism spending, the repercussions of the financial crisis and an economic development that fell short of expectations resulted in a further increase in debt. A process that even the youngest Presidents Barrack Obama and Donald Trump were unable to reverse.

Today it can be said that despite a growing gross domestic product, the national debt of the United States is higher than ever before - not least because of a repeated suspension of the debt ceiling.

Even if the absolute indebtedness of the USA is dizzying heights, this figure is often interpreted in abbreviated form. Many economists therefore hold that Government debt ratio for far more meaningful. The national debt ratio is a key figure in which the debt is related to the economic performance of a country, the gross domestic product (GDP). So it is the ratio of total debt / GDP, calculated as a percentage. So it was US government debt ratio 2019 according to the IMF 108.7% (4). That's a lot, too, and the US national debt ratio has also been rising for years. In an international comparison, this was only an average in 2019: 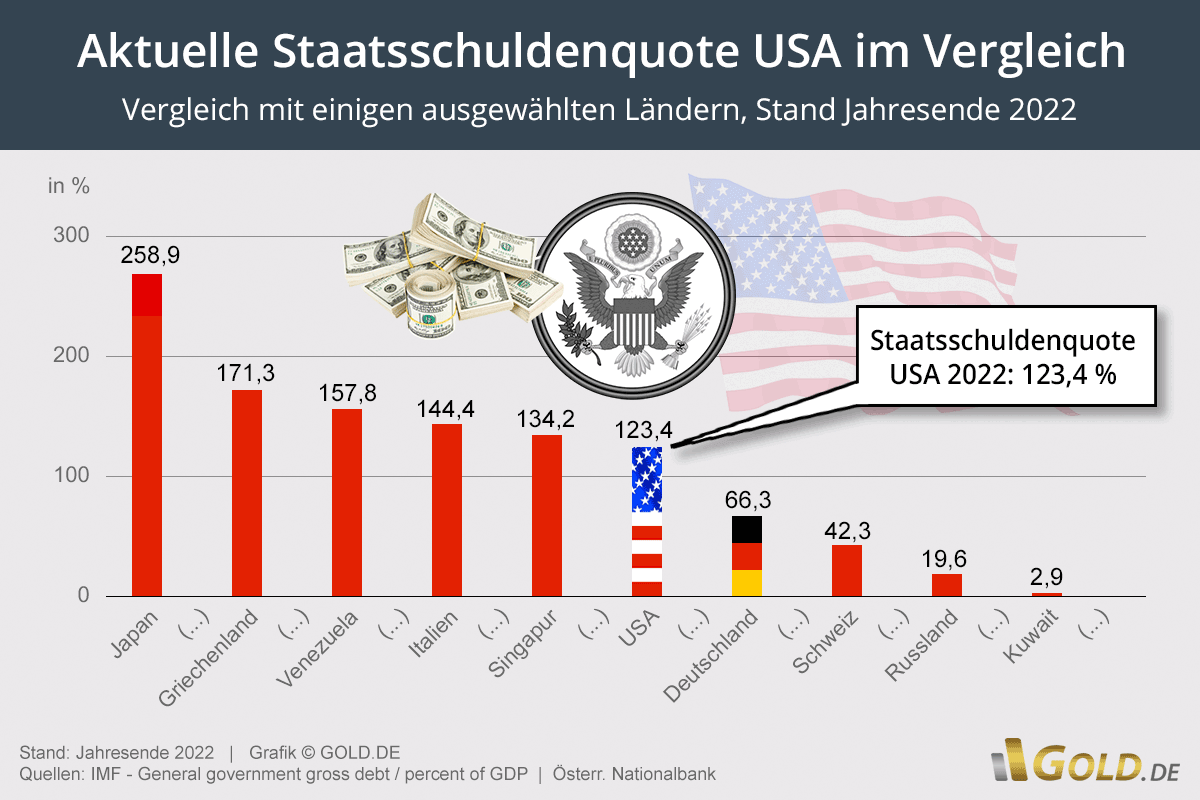 According to estimates by the International Monetary Fund, the US debt ratio will rise to around 131.2 percent in 2020(4).

Trillions? Billions? What is it called correctly?

The term "billion" does not exist in (US) English! That confuses even seasoned experts from time to time. The source of the error lies in the fact that the English word "billion" is retained in the translation into German, ie it is translated as "Billion".

So must be correct whenever in English-language media by billions we're talking about this in German with Billions to be translated.

Conversely, what we know as "Billion" is called "Trillion" in English.

Basically there is no such thing as a “real” debt watch. Common sense tells you that. This applies to all debt clocks and of course also to the debt clock from GOLD.DE. Debt clock calculations can only be a mathematical approximation. They are an illustration and not an exact result.

Our calculations are based on the official figures from the US Treasury Department www.treasury.gov. Even if these differ daily, often by billions, forwards and backwards, these are static numbers. That is, it is a fixed value at a specific point in time.

In contrast, a debt clock is a dynamic value that is continuously output every second. This results in imprecision, since a current value must be interpolated during the calculation to a value in the past. In addition, the US Treasury Department's figures are not published daily, such as on weekends and holidays.

Therefore it can happen that our USA debt clock shows a different trend for a short time and temporarily than the overall trend on an annual basis, or sometimes "hops" happen. In a quarter, in a month, or even in a week, debts can "fall" temporarily, and yet at the end of the year there is a total increase in debt, and vice versa. This does not change anything about the central statement: As of December 31, 2020, the debt of the USA was over 27 trillion US dollars, and the trend is increasing.