What was the Bible written for? 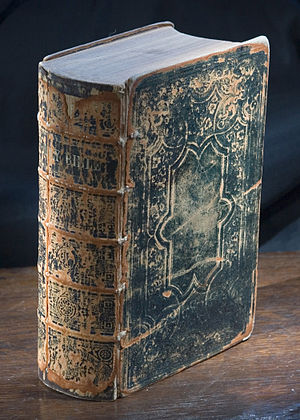 This edition of the Bible is from the 1800s. It belonged to a family in the United States.

The Bible is a famous book, more precisely a collection of scriptures from ancient times. The word comes from the Greek language and means "books". The Bible consists of two parts: the Old Testament describes the people of the Jews with their God, and the New Testament is about Jesus Christ and his followers.

The Bible is the holy book of Christianity. No other book has been translated into as many languages ​​as the Bible. Many artists have received ideas for their work from the Bible. The Bible is also called the "Book of Books".

The Bible tells stories of events that were found to be important. When the passages of the Bible were written, the world and life were very different from what they are today. The people of the Orient did not read the stories the way we read the newspaper today and also believed in miracles. Even today it is still an important question whether one should read the Bible like a current report or the way the oriental people of that time understood the stories. After all, people back then wanted to testify to their faith and not write like today's scientists.

What is in the Bible

This picture from a church shows a story from the New Testament. Jesus and his followers are on a ship on the Sea of ​​Galilee. A storm surprises them and the supporters are frightened. Jesus calms the lake and it suddenly becomes quiet. Few people today believe in such miracles. The main aim of the story is to show that Jesus is stronger than nature.

The two large parts are called the Old Testament and the New Testament. When a person writes a will, he mostly distributes his wealth and determines what should be done with what. The Bible describes a kind of covenant or contract between God and man. It's an offer that people can take advantage of.

The Old Testament is a collection of scriptures. These writings are called books. The first five books of the Bible are called "the five books of Moses". They tell how God created the world and what happened up to the time of Moses. The book of Judith, for example, tells of what this woman did. Above all, these books describe the history of the Jews. Others are textbooks that tell how the believer should relate to God and to other believers. There are also books about individual prophets. A prophet is a person to whom God has spoken and who is supposed to warn others about something.

The New Testament begins with the four gospels. "Gospel" comes from the Greek and means "Good News". The Gospels describe the first and last years of Jesus' life. Because these people believed that he would redeem them, they called him Christ. The Acts of the Apostles tells what some of the apostles experienced after Jesus' death. An apostle is a devotee who often and gladly stayed near Jesus. The "Apocalypse" describes the end of the world when Jesus comes back to earth. In German it is called the Revelation of John because John wrote it.

The other books in the New Testament are letters. They were written by the apostle Paul and others. These men each wrote such letters to a Christian community in a different city. In it you can read how Christians live and what exactly they should believe in.

Who wrote the Bible? 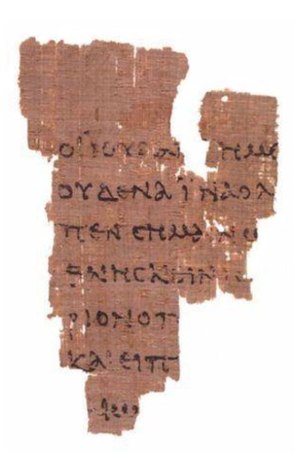 This is a piece of papyrus, an early type of paper. It was described around the year 120 AD. The letters are Greek and the text comes from the Gospel of John. This is the oldest piece of the New Testament that we still have today.

The Bible was written by people, and many parts are named after their author. However, opinions diverge on the following point: Many people believe that the authors wrote down what they experienced. Other people believe that God "suggested" to them what to write. This is called "inspiration". Those who assume that God whispered or even dictated the scriptures to the writers word for word, believe in literal inspiration. This is also called "verbal inspiration". Be that as it may, scientists today suspect that the oldest scriptures in the Bible are around 3,000 years old. Much was passed on for a long time before anyone wrote it down.

It is not much different with the New Testament. Jesus may have died around AD 30. The oldest writings about him are probably some of Paul's letters written some 20 years later. It would be another 15 to 35 years before the first gospel was written.

In the New Testament scriptures, the names of the authors appear above. For example, in the first century AD, people began to say that the first gospel was written by Mark. That was the translator who accompanied the apostle Peter. Or it was said that he accompanied the apostle Paul. In reality, no one knows who wrote this gospel. Only in the case of some of Paul's letters does one think today that he could actually be the author.

What language was the Bible written in?

The Old Testament is written in the ancient Hebrew language. That was the language of the Jews at the time. There was no difference between uppercase and lowercase letters and no spaces. It was only written with concurrent sounds, but without self-sounds. As a result, the content was mostly clear. When pronunciation, you have to guess what it should sound like more often. For example: The name of God is YHWH. We say Yahweh today, but for a long time many thought it should be called Jehovah.

Jesus and his followers spoke Aramaic. This was a dialect of Hebrew. However, this language was not written. Paul also wrote in his famous letter to the Romans that they did not understand Aramaic. The whole New Testament is written in the Greek of that time. The sentences that have come down from Jesus have all been translated before.

For a long time in Europe the Bible was only known in Greek or in a Latin translation. The Old Testament was read in a Greek or a Latin translation. Martin Luther then translated the Bible from Greek and Hebrew into German in the years after 1500. He wasn't the first to do this, but his translation was the most important in Germany. In Switzerland, Huldrych Zwingli had met him ten years earlier. And in England there were even older translations. A translated Bible was the first book to appear in many languages ​​around the world.

Are there pictures in the Bible?

When the Jewish King David was still young, he is said to have faced Goliath: This enemy was much bigger than himself. He was still able to defeat him with a sling. Many have made a picture of it, like this painter from the Middle Ages.

From the time of the Bible itself there are almost no pictures left. But many people wanted to have a better idea of ​​what was going on in the Bible. Lots of stories work very well with paintings and other works of art. You see Jesus Christ as a good shepherd with sheep, or Moses with two large tablets on which the laws for the Jews are written. Most people couldn't read at all. A picture therefore said more than a thousand written words to you.

Bibles that have been written since the Middle Ages often show pictures. You can also see paintings and statues in churches. However, some Christians feared that believers might begin to worship a statue of Christ instead of Christ himself. Some went so far as to destroy images. This happened mainly during the Reformation, and there is also a word for it: iconoclasm.

For Jews and Christians, and also Muslims, their holy books are especially important. They believe that what God told their prophets is in them. Therefore these religions are also called book religions or scriptural religions.

Is the Bible also important for the Koran?

For Muslims, the Bible is not a holy book, but the Koran is their most important holy book. But many Muslims still respect the Bible. Stories come from the Bible that are also known in Islam. However, the stories go a little differently sometimes.

For example, Moses is a prophet in Islam, just like Mohammed. He is often mentioned as Musa in the Koran. The Muslims also told each other many stories about Musa. Another prophet is Isa ibn Maryam, "Jesus, son of Mary". For Muslims, however, Jesus is not the Son of God, nor did he die on the cross.

Not much is explained in the Quran about the people and events of the Bible. Apparently Mohammed assumed: My listeners already know a lot from the Bible. That is why scientists today believe that much of the biblical stories were already circulating in Arabia at that time.