Allegedly, the defendant himself fled from her native India to Germany because of reprisals. But that should not have stopped the 50-year-old man from spying on their compatriots in Germany and sending information to the Indian foreign secret service "Research and Analysis Wing"(RAW) to pass on: Names of opposition members living in Germany, photos of demonstrators and addresses. The public prosecutor is certain that the couple did all of this for money.

Since Thursday (November 21, 2019) the Indian and his 51-year-old wife have had to answer to the Higher Regional Court in Frankfurt am Main on suspicion of being a secret service agent. Between 2015 and 2017, the couple, who currently live in Mönchengladbach (state of North Rhine-Westphalia), are said to have spied on supporters of the opposition Sikh scene and Kashmir movement and their relatives in Germany, according to the indictment. The spouses are accused of eleven cases, and they are said to have collected around 7200 euros for their work. The defendants met with officers from the Indian secret service in Frankfurt am Main about once a month. According to the indictment, two agents were disguised as consul at the Indian consulate general in Frankfurt. At the meetings, which mostly took place in the private apartments of the officers, initially only the accused 50-year-old passed on information. His wife only joined them later and was involved in two of the eleven accused espionage cases.

The defendant specifically requested information about members of the opposition groups in Cologne and Frankfurt, among others. In 2017, when the Indian Prime Minister was about to visit Hamburg on the sidelines of the G20 summit, he is said to have found out whether and how members of the Kashmir movement had planned demonstrations against the head of government. On another occasion he is said to have found out the names of 14 people who had demonstrated against the Prime Minister and passed them on to the secret service. He had already taken photos at a rally in 2015 and also made the pictures available to his liaison officers.

The accused is himself a Sikh

The Indian, who came to Germany for the first time in 1992 and applied for asylum, sits quietly between his defense lawyer and an interpreter. Although he has lived in Germany for a long time, he only has rudimentary language skills. Outwardly indifferent, he listens to the translator as the indictment is read out. His wife, on the other hand, occasionally speaks quietly to her defense attorney.

According to his own statements, the defendant was imprisoned for about eight months in India because he was politically committed to the interests of the Sikh religious community. As a Sikh, he was under pressure after the fatal assassination attempt on then Prime Minister Indira Gandhi in 1984. That's why he came to Germany. Indira Gandhi was shot dead by two of her Sikh bodyguards on October 31, 1984 after Gandhi approved a military offensive over the Golden Temple, the largest Sikh sanctuary. The temple had been completely destroyed. An estimated 3,000 Sikhs were killed in the days following Gandhi's murder. Another 100,000 had to flee from the capital New Delhi. 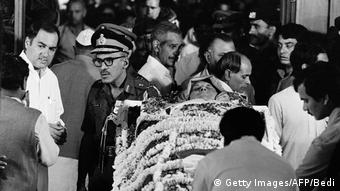 Indira Gandhi was murdered by two Sikhs in 1984

Initially, his asylum application was rejected. The follow-up application with new asylum reasons had also failed. He is currently tolerated in Germany, as the court adds. The 50-year-old is allowed to stay in Germany because of the so-called "deportation obstacles".

In his new home, the defendant worked in the textile industry, among other things. From 2003 to 2005 he supported his wife, who had started her own business in the same industry. The couple are now living on government aid. The defendant is unable to work and has diabetes.

The first day of the trial is not just because the interpreter has to translate every question from the court. The defendant often answers monosyllabically and slowly. He keeps asking the interpreter, only to answer with a few words.

It remains to be seen whether, in spite of the translation, he does not understand, does not want to understand or cannot remember the questions directed at him about himself. The father of two sons and his co-accused wife did not have much more than a few personal details to say on the first day of the trial. The question of whether he will comment on the allegations is also postponed. Both defendants face a maximum sentence of five years. Six more dates have been set for the procedure until mid-December.