What is unique about your country

The state of Brandenburg

Whether for visitors, entrepreneurs or its own citizens - the state of Brandenburg offers unusual perspectives and creates the necessary freedom to shape them with personal commitment. Brandenburg relies on people who take their fate into their own hands. And so that everyone can use their opportunities, the state provides good framework conditions.

Equal opportunities are part of the quality of life in Brandenburg

This includes the compatibility of work and family: In Brandenburg, children have a legal right to care in a day-care center and the level of care with childcare places is among the best in Europe and Germany. In addition, low-income families receive grants for a vacation stay and family-friendly communities receive special support, to name just a few other examples.

Brandenburg stands for living and working in an intact environment. The people of Brandenburg see their future opportunities in the intelligent and careful use of the unique natural and cultural-historical resources of their country. 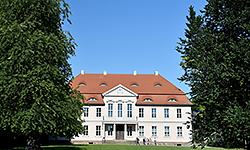 The state of Brandenburg is located in the northeast of the Federal Republic of Germany. Together with the city-state and the simultaneous federal capital Berlin, Brandenburg forms a major metropolitan area and conurbation on a national and European scale. The state capital of Brandenburg is Potsdam, bordering Berlin to the southwest.

With a maximum diagonal extension of 291 km, a north-south extension of 244 km and a west-east extension of 240 km, Brandenburg is one of the most extensive countries in Germany. Through its total area of ​​29,476 km2 it is the largest of the new federal states. Brandenburg shares its external borders with four federal states and another EU state - in the south with Saxony (244 km), in the west with Saxony-Anhalt (370 km), in the north-west with Lower Saxony (29.5 km), in the north with Mecklenburg- Western Pomerania (441 km) and to the east with the Republic of Poland (252 km).

Geologically, Brandenburg is part of the North German Lowland, from the Uckermark in the north to the Elbe-Elster lowland in the south of the country. The maximum elevation is 201 m above sea level (Kutschenberg / Oberspreewald-Lausitz). Brandenburg is endowed with a rich treasure trove of Ice Age landscapes, which to this day determine the originality and diversity of the external appearance. 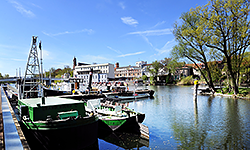 The lowlands and valleys created as a result of the glacial processes, home of the Brandenburg river and lake landscapes, are characteristic of the landscape of Brandenburg. Due to the constant alternation of 33,000 km of rivers, including the Spree, Havel, Rhin, Nuthe and Dahme, as well as a large number of canals and around 3,000 lakes, Brandenburg is the state with the most water in the Federal Republic.

In addition to the settlement and densification centers of the state, Brandenburg still has largely original and protected areas in the form of nature and landscape protection areas in large parts of the state. The 15 large protected areas and nature parks take up around a third of the country's area.

The history of the BRANDENBURG DAYs, the state festival of the Brandenburgers.

Chronicle of the state government