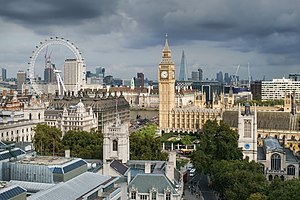 Several sights in one picture: In the middle you can see the “Big Ben” tower with a large clock that belongs to Parliament.

London is the capital of Great Britain. The city has over eight million inhabitants, making it one of the largest cities in Europe. It is located in the south-east of England, on the River Thames, where ships can sail into the North Sea.

Until about 100 years ago, London was the largest city in the world. At that time the British ruled over a huge world empire that stretched over a quarter of the earth. Even today, London is an important city for European politics and economy. With six international airports and several main train stations, it is also a transport hub.

There are many theaters, museums and places for music or sports in London. One of the most famous museums is the British Museum with cultural assets from all over the world. In addition to the old sights in London such as Big Ben or Buckingham Palace, a particularly noticeable one was added in 2000: The London Eye, the eye of London, is the fourth largest Ferris wheel in the world.

What used to happen in London? 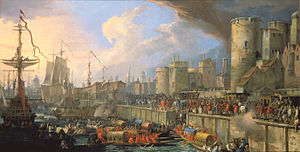 London was founded by the Romans in AD 50. At that time the city was still called Londinium and was the capital of the Roman province of Britain. After the Romans withdrew, Londinium was destroyed by the Anglo-Saxons. The city was re-established, but after that it was small and insignificant for a long time.

It was not until 1066 that King Wilhelm the First made it the capital of England again. It replaced the old capital Winchester. In 1707 London became the capital of Great Britain with the Act of Union, the amalgamation of Scotland and England.

In modern times, British sailors conquered numerous colonies. So London became an increasingly important trading city. Imposing buildings were erected to express the power of the British Empire. Especially in the age of industrialization, the population increased enormously. This created many poor neighborhoods. The writer Charles Dickens wrote many novels about London at the time, which deal with the people in these slums.

But London has also been hit by many disasters. In 1666 a major fire destroyed four fifths of what was then the city. Outbreaks of diseases such as the plague and cholera have killed many Londoners. During the Second World War, German planes bombed large parts of the city. At that time, many residents sought refuge in the subway stations.

In 1965, some politicians felt that the city limits of London should be expanded. They found it unfair that the suburbs benefited from public transport and other things, but did not have to pay taxes to the city. That is why many surrounding cities were incorporated. The landscape in between was largely built up with houses. However, there are also many large parks in London.

What should one know about the Londoners? 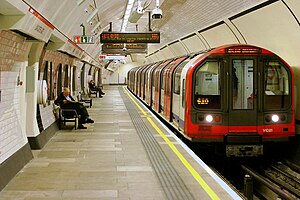 The London Underground is the oldest in the world. The Londoners call it "Tube", pronounced "Tjuhb". That is called tube. The tube is used by around four million people every day.

More than 14 million people live in and around London. That is about a quarter of the population of England and a little more than a fifth of the population of the whole of Great Britain. Many of these people were not born in London at all, but immigrated from elsewhere. Often the immigrants come from the colonies of the former empire such as India, Pakistan, Nigeria, Ireland or Egypt. Others come from EU countries such as Italy.

Many people move to London from other parts of the UK because they study there or have found a good job. That is why you can hear many different dialects of the English language in the city. Most Londoners are Protestants. But there are also many Jews, Muslims and Hindus among the immigrants.

London is a city that attracts many rich people. No other city has so many billionaires. In some parts of the city the prices for apartments are so high that only very rich people can live there. You can hardly find normal earners in the city center. Today they tend to live in the suburbs or on the outskirts.

Londoners love football. There are a total of 17 different professional clubs in the city and its surroundings. The most successful is Arsenal FC from north London with 13 championship titles. Important rivals for Arsenal are Chelsea FC and Tottenham Hotspur. Cricket and rugby are also very popular. The largest stadium in the city is Wembley Stadium with 90,000 seats.