Why do countries have debts

National debt in Germany and the world in 2020

In 2020 the debt of the states increased sharply worldwide. The decisive factor is the corona pandemic and the consequences for countries with rising unemployment figures. In such times of crisis, the state offers citizens and companies financial support, currently in the form of Corona aid packages. And many countries have borrowed money for it and thus incurred new debts.

Debt is important to states and, in principle, nothing bad either. But at what level is the debt in Germany, Europe and worldwide?

What is national debt?

National debt summarizes the annual borrowing and also the existing debts from previous years, shown in the country's currency. Debt is measured in terms of gross domestic product (GDP). The debt ratio is calculated from the ratio of debt to GDP.

Unlike in private households, the state does not have to repay the debt in the foreseeable future. As long as there is regular income for the state and the expenditure does not predominate, there is no threat of national bankruptcy. As a rule, new loans replace expiring loans. 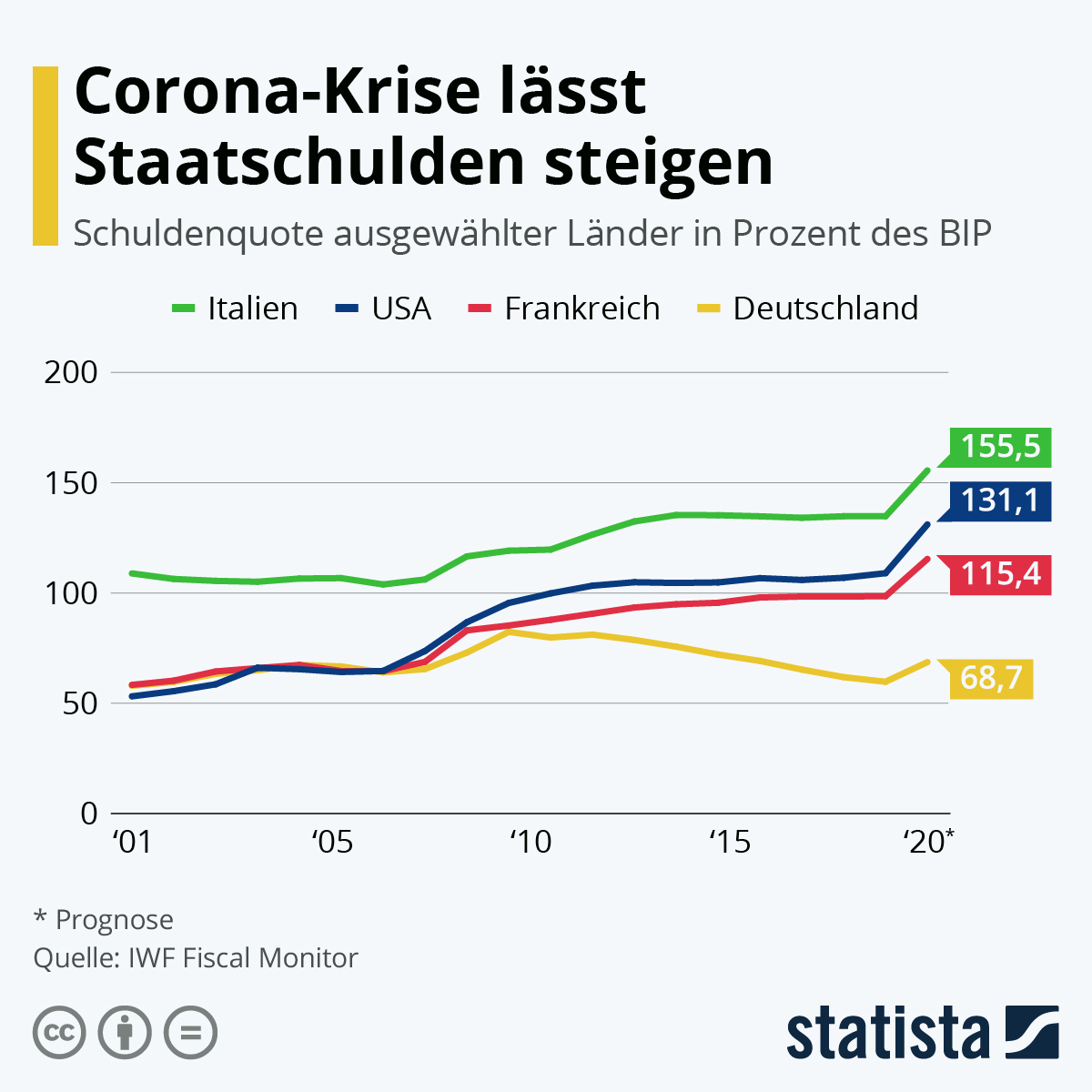 Where does the state get money from?

In principle, the state receives money from tax revenues. But that is sometimes not enough to make the necessary investments in the future. So the state has to borrow money. The simplest option are loans from the bank, which are repaid with interest.

The state also receives money through the sale of government bonds or federal treasury bonds. Investment funds, insurance companies or citizens can invest their money in government bonds and receive repayment over years plus the interest accrued. However, demand in Germany has fallen sharply in recent years because the interest rate level is very low.

The state can benefit from annual inflation. Debt can be reduced more quickly due to inflation and rising tax revenues.

The creditworthiness of a country is assessed by rating agencies, which give an assessment of the economic situation. If the debt ratio exceeds 90 percent, investors get nervous. Donors without trust in the state charge higher interest rates. Especially in countries with low GDP and high debt, interest rates are much higher than in Germany. The problem is that the mountain of debt grows faster due to the higher interest rates. That is why economists are warning of rising national debt, as this can lead to an increase in interest rates.

How high is the national debt in Germany?

In Germany, there was significant new debt in 2020 as a result of the corona pandemic. The last debt in 2019 was worth 1,899 billion euros. In 2020 this value is expected to increase by a further 379 billion euros. The Federal Ministry of Finance states that a large part, 156 billion euros, was raised for corona aid. According to Statista, the debt in October 2020 was 2.2 trillion euros, the highest level ever recorded.

Debt clock in Germany with the current national debt

The money is mainly spent on transport, research, social security, defense, education and, most recently, the Corona aid packages. In the ranking of the European Union, Germany ranks third in terms of debt.

Source: Statista / * forecast based on the national debt in Germany in the 2nd quarter of 2020

Debt of the federal states in Germany

A large part of the national debt is attributable to the individual federal states in Germany. Of the 16 federal states, North Rhine-Westphalia has the highest debt with 187,187 million euros. Followed by Lower Saxony with 62.298 million and Berlin with a debt of 57.175 million euros. Saxony has the lowest debt at 2.16 billion euros.

Public debt in the European Union 2020

The total debt value in the European Union (EU) is 11.86 trillion euros. Frankeich has the highest absolute debt with 2,638.27 billion euros. Closely followed by Italy and Germany.

However, countries with lower economic output have a higher debt ratio. Greece has the highest national debt ratio at 187.4 percent. Debt averages around 87.8 percent in the EU and 95.1 percent of GDP in the euro countries.

Countries in the EU with the highest debt ratio

Source: Statista / forecast of public debt in the EU member states in the 2nd quarter of 2020

Estonia has the lowest national debt with 5.09 billion euros and an additional low debt ratio of 18.5 percent.

The USA has the highest absolute national debt in the world. In October 2020, the debt was $ 27.14 trillion. A large part of this is also related to the corona pandemic. Despite the high debt, the debt ratio is currently 108.02 percent.

In Macau, on the other hand, there is currently no debt. Other countries with low debt are Hong Kong and Brunei.