British accent or American accent? Every English student asks himself this question at some point when it comes to correct English pronunciation. English is one of the most widely spoken languages, which is why it is always beneficial to learn it. With all the English-language films, music and Anglicisms that we already use in our everyday language (manager, shop, playlist, etc.), it has to be confessed that we are simply surrounded by the English language 24/7. When it comes to the different English accents one finds that the classic English lesson always prefers the British accent. In fact, we are exposed to the American accent much more often in our lives. So which accent should you pick up on yourself and give it preference when studying? Read our tips today! 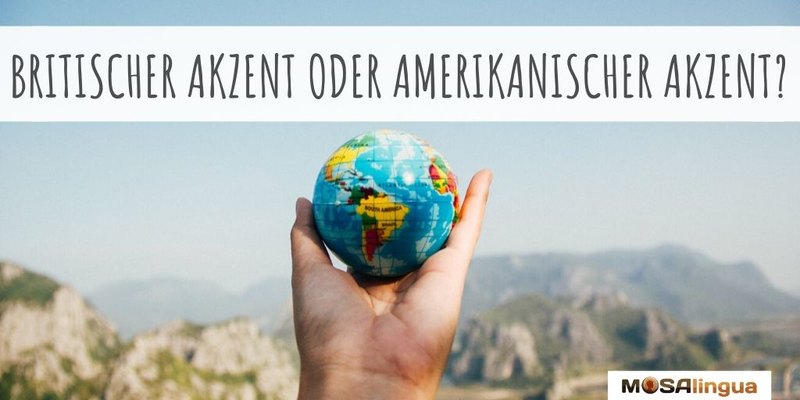 But watch out! There are many accents in the English language! English is also the official language in many countries, although it is not even spoken as a mother tongue by the population. Nevertheless, in Germany we mainly know two English accents: the British and the American. But do you also know the differences?

It is important to know that there is NOT ONE British accent, there are SEVERAL ones. The version that is colloquially referred to as "English" or "British" accent is actually called "received pronounciation“Called and corresponds more or less to the London accent. Sure, you say now. In Germany you get to hear different accents depending on the region ... In Great Britain the Liverpool accent is very different from the Welsh accent and from the English spoken in Inverness (Scotland). So to sum up, it has to be said There isn't a single British accent, there are numerous versions of it. To get a better idea of ​​this variety, check out the following video by Siobhan Thompson, in which she introduces 17 different British accents.

British Accent or American Accent: The accent from the United States

"American accent" means the (often Midwestern accent) from the USA. This accent is used primarily in film and music. Compared to British English, the American accent is simply much more present in the media world. Of course, there are differences between the English spoken in California and the English spoken in New York. Or between the north and south of the USA. For the uninitiated ear, however, they are easy to ignore. What this means is that as an English learner, it will be much easier for you to follow a Boston or San Francisco accent than the British accent. But just take a look at the following video! 🙂

Why Choose the American Accent When You Study?

In an earlier post on English pronunciation, we already had our preference for the American accent mentioned opposite the British accent. It just seems less cumbersome and more useful to us to use this English accent. Why?

However, if you have a preference for the british accent then you are still welcome to learn it! For example, if you are planning to stay in England, it will be an advantage for you to know the British accent. You can work on your pronunciation by watching UK movies or series and finding a UK tandem partner.

However, be aware that in order to speak English correctly, you have to make a choice. There are terms that exist in both language versions, but do not have the same meaning! For example, an American says "elevator"While a Briton"lift“Says - both mean an elevator. It becomes more embarrassing if you now use the word "rubber"Without knowing that while" eraser "in the US means" condom "in the UK.

Once you have made your choice, it is essential that you stay true to the accent you have chosen in order to be properly understood by the other person.

So which accent do you go for?

See below the video from our MosaLingua English teacher Abbe, in which she too takes a close look at the two accents for you. The video is in English, but you can activate subtitles in different language versions by clicking on the little wheel at the bottom right of the picture.

Regardless of whether you have a British accent or an American accent - do you want to speak English more confidently?

To help you develop a good English pronunciation, we designed the MasterClass Speak English for you. This training includes 10 learning units and access to numerous resources, exercises and videos. We're talking here too, of course, about why we chose to teach the American accent. Would you like to find out more about our MasterClass? Then it's best to follow this link right away!

If you have the time, we advise you to to hear and get to know as many English accents as possible.

But when it comes to learning and practicing, we recommend that you, as already mentioned, focus on an accent of your choice (and strongly recommend the American accent for this). We hope that our arguments convinced you and we look forward to continuing to learn English together! You can find more interesting articles on the subject of English here:

The best thing to do is to join our language community now so that you don't miss any more information about language learning. Numerous subscribers are already benefiting from the great tips and tricks that our team of language experts shares with you. Follow us on Facebook and Twitter or subscribe to our channel on YouTube and start improving your language skills with our videos. Don't forget to turn on your notifications so you don't miss any of our great tutorial videos. Like today's article or follow us!
<?