How do the Greeks and Romans differ?

The Roman and Greek gods were different in terms of their names, but had similar meanings. The Roman religion, on the other hand, differed from the Greek religion in that it was a state religion. Rather, it was rituals and ceremonies that played a role among the Romans. The Roman deities were very similar to those of the Greek pantheon, but were even more extensive.

The Roman religion accepted the gods of all nations that made up the empire and placed them in the Roman pantheon, even Mithras, the Persian sun god, or Isis and Osiris (gods of the Egyptians), to whom sacrifices were also made at home.

The Roman religion was more practical and less poetic than the Greek religion. Every Roman god had a function, fulfilled a task. One sacrificed to the gods according to their function and hoped for advantages. The distribution of tasks among them was clearly regulated. All possible activities, especially in the household, had such a divine regulation.

Differences Between Greek and Roman Religions

The Romans established a body of priests (religious leaders) to precisely determine the honor of the gods and the ceremonies. Gaius Julius Caesar created the title Pontifex Maximus (highest priest) to gain control over worship and sacrifice to the gods. There were more superstitious rites of the Romans than the Greeks, which can be ascertained by archaeological finds of sacrificial animals and birds. One could guess the will of the gods through the sacrifice (good or bad omen), for example through the sighting of the entrails of the animals.
The gods were consulted on everyday questions from the Romans to hear their opinion: for example, whether a war would break out? When will there be peace again? When will the child get well again? Will a deal be successful? 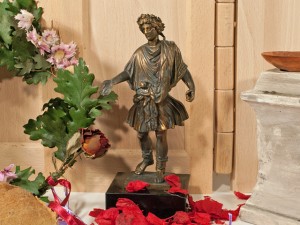 The Roman gods in the household were also of great importance and were worshiped much more often than the Greeks. The Penates were the most famous gods for Roman households, who were considered their great guardians. Their fires burned constantly on the local hearths and food was always offered to them. The larars protected the Roman house and its inventory. Every day the father of the family gathered all family members behind him and made sacrifices to the gods at the domestic lararium.

The holidays were more numerous in Rome than in Greece. Around every four days there was a holiday on which sacrifices and games were honored to the gods. The main festival days were in honor of Janus, the great god of the Sabine women and the beginnings, celebrated at the beginning of January (the month was therefore named after Janus). The double-faced Janus looks with one half of his face into the past and with the other half into the new year.

The Saturnalia, on December 19th, in honor of God's Saturn (the annual Thanksgiving) lasted five days, during which the angels were briefly free. The feast of Minerva also lasted five days. The festival of Cybele should also be mentioned, which is similar to the Egyptian festival of Ceres and the festival of Isis in Egypt, which lasted six days. During the holidays, the Roman people enjoyed many freedoms that they otherwise did not have.

Greek and Roman gods and their differences

In Roman mythology, the names for the deities are different, although they are about the same god. For example, among the Romans, the goddess of love is "Venus"And among the Greeks"Aphrodite" called. Thus becomes the highest of all Roman gods "Jupiter"In Greece to"Zeus“.

The following table gives a small overview of the world of the Greek and Roman gods.

If you like the article "Greek and Roman gods ”Then we'd get overa linkon this side very happy and thank you very much in advance.

Exciting Roman information as an RSS feed about "Greek and Roman Gods"received on your website? Simply click on the orange symbol and integrate the appearing page (www.forumtraiani.de/feed) into your html page. More on this at Wikipedia