What do the negative FDI mean

Foreign direct investment serves as an indicator of the financial integration of a country in the world market. Direct investment is the inflow of foreign capital to acquire means of production or to participate in companies. The investor thus buys assets in an amount that authorizes him to exert an influence on the operational business.

In Argentina, direct investment rose sharply at the beginning of the 1990s, made possible, among other things, by the liberalization of the economy in South America at that time. As can be seen from the graph, direct investment peaked in 2000/2001 just before the crisis. Much of this direct investment resulted from the privatization of state-owned companies, particularly in the telecommunications and energy sectors.2

This situation changed with the release of the Argentine peso and the resulting nominal devaluation. The consequence of this was that the Argentine products were significantly cheaper again in relation to other goods and, as a result, there was again greater demand on the world market. Exports rose rapidly and the Argentine trade deficit turned into a surplus.

Current account balance and FDI (Argentina 1980-2010, in billion US dollars) 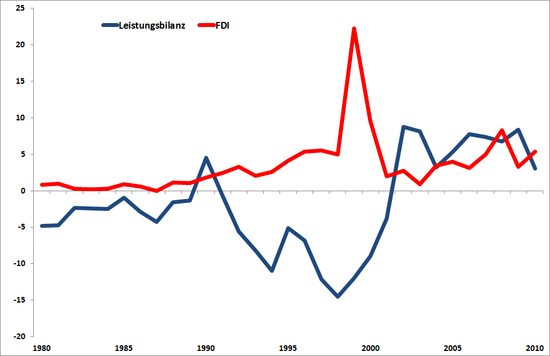