Can I change my body shape?

Slim or wide hips? Classic V-shape or massive build? Our fitness blogger Luisa-Maxime Huss explains whether and what influence body shape has on metabolism and training.

In the fitness industry, a distinction is often made between the three body types ectomorph, mesomorph and endomorph. The respective shape of the body should have an influence on the human metabolism and determine which type of diet and training is most suitable for you. But what does it mean? What are the body types anyway and do they really affect the metabolism?

The origin of the body types

In the 1940s, the psychologist William Sheldon developed the theory of body types. He photographed 4,000 different subjects and tried to divide them into different types. For Sheldon, three body types with specific mental and physical characteristics emerged: ectomorphic, mesomorphic and endomorphic.

The data collection and typing only took place on the basis of subjective evaluations of image material and is therefore one of the greatest criticisms of his theory.

Now it has been claimed, and often still is, that body type is a reflection of the optimal approach in training and nutrition:

As can be seen, these are obviously different metabolisms. The endomorphic type is said to have the lowest metabolic rate. The highest is the ectomorph and in between is the mesomorphic body type. But do the different body types actually have an impact on the metabolism?

We bundle many other fitness topics in our special.

There are body types, but exclusively and only in terms of body structure or bone structure. The hypothesis that the respective body type influences the potential to build muscle or lose fat is simply wrong. There is no study to suggest that there is a supposedly "good" and "bad" metabolism.

What does that mean?

However, if you look at the output, there are very large variations. Above all, the NEAT (Non-Exercise Activity Thermogenesis) should not be disregarded and plays a decisive role. Because this can mean a calorie consumption of up to 1000 calories and that through completely unconscious movements in everyday life, see the following article.

So it means that it is not the body type that influences the metabolism, but a number of other factors. An office worker, for example, will have significantly lower calorie consumption than a bricklayer who works hard physically every day. Likewise, a person who exercises intensively for two hours six times a week will burn a lot more than someone who only exercises an hour three times a week.

Note: People who suffer from metabolic diseases, such as thyroid problems, hormonal imbalances, etc. are not taken into account. We are talking about healthy people, as it looks different with such diseases.

Body types are by far an overrated criterion. They neither affect the metabolism, nor does it make sense to adapt one's diet and training to them. In the end, the terms ectomorph, endomorph and mesomorph only function as a description of the bone structure. There are neither hard gainers nor soft gainers, good metabolism or bad metabolism.

People who tell how much they eat a day and still do not gain or lose weight usually do not even know how many calories they are actually consuming because they do not count any calories. Eating behavior is often overestimated or underestimated. Furthermore, many do not know how high their actual calorie consumption is. These are the two decisive factors in gaining weight and losing weight! 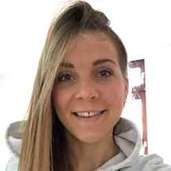 25 years young, from Göttingen, self-employed nutrition and fitness trainer, blogs passionately about fitness, nutrition and health. She also motivates and inspires thousands of people on her social networks such as Instagram, Facebook and Snapchat, where she gives numerous tips, conjures up delicious recipes and shows great exercise videos.