What animals have the most unique vagina

Bizarre: A cave insect pushes the reversal of roles between the sexes to extremes. When mating, the female not only sits on top, she also wears a kind of penis. The male, on the other hand, has a vagina. This absurdity, discovered by biologists in Brazil, is the first known example of such a complete swap of the sexual organs, as the researchers report in the journal “Current Biology”. Why these insects developed this unusual inversion is unclear.

It has long been known that there are strange sex practices and strange sexual organs in the animal kingdom. The males in particular have developed a whole arsenal of different penis variants. There are also forms of role reversal from time to time. Kazunori Yoshizawa from Hokkaido University in Japan have now discovered the most unusual example of reversed roles to date: in cave insects of the genus Neotrogla.

These insects, only two to four millimeters in size, were only recently discovered in caves in Brazil. So far, four species of this genus are known. The first discoverers of the Neotrogla had already noticed that the females seemed to have unusual appendages. But the exact function of these so-called gynosomes was unclear. Yoshizawa and his colleagues have now investigated this in laboratory tests - they watched the insects mating very closely. 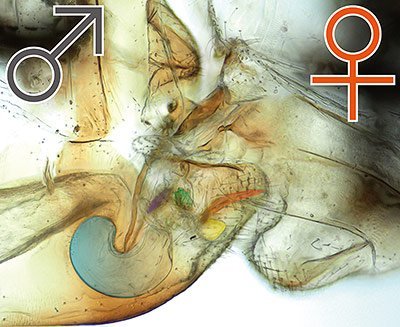 As it turned out, the females not only wear penis-like appendages in Neotrogla, they also use them like their male counterparts: When mating, they sit piggyback on the males and insert their gynosomes into their vagina-like body opening. Once inside, a membrane of the gynosome swells and anchors the penis-like sex organ in the male's body opening. "It is true that the roles of the sexes are already reversed in some animals, but Neotrogla is the only example in which the organ has also been reversed," says Yoshizawa.

In attempts to separate the two animals, the researchers tore off the males' abdomen rather than the gynosome slipping out of its anchorage. No wonder that the mating with the cave insects takes up to 70 hours - they cannot separate in the truest sense of the word. "This anchoring mechanism of the Neotrogla females is unique," the researchers explain.

Interestingly, everything stays the same when the germ cells are exchanged: the female takes in the male's sperm with her gynosome - she sucks them up with her penis-like appendage. But that's not all: The researchers have found evidence that nutrient-containing substances are also released to the female. In the barren habitat of these insects, the male could provide his offspring with start-up capital in this way. 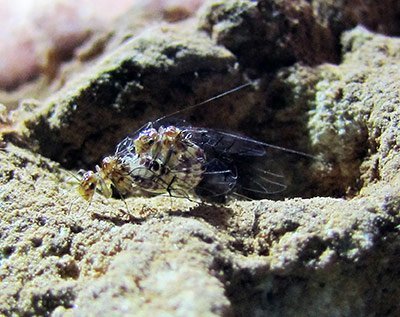 But why this bizarre role reversal developed with these cave insects of all places and with hardly any other animal is still unclear. “It will therefore be important to find out why only Neotrogla developed this pronounced female penis,” says co-author Yoshitaka Kamimura from Keio University. The researchers now want to study the physiology of these insects in more detail and breed a population of these animals in the laboratory. (Current Biology, 2014; doi: 10.1016 / j.cub.2014.03.022)