What is the formula for hypochlorous acid

Hypochlorous acid, also known as monoxochloric acid (I), is a chemical compound of the formula HClO. It is a simple molecule with central oxygen attached to the chlorine and hydrogen atoms through simple bonds.

It is a chloroxacid that has valence (I). It is a weak acid that is typically formed when chlorine dissolves in water. Various other names are referred to such as: chloric acid, chloranol, hydrogen hypochlorite, and chlorohydroxide.

Hypochlorous acid is produced by white blood cells in the human body to fight infections because it works against a wide variety of microorganisms.

The above reaction is in equilibrium and it is not easy to isolate HOCl from this mixture. However, stable hypochlorous salts can be obtained by dissolving chlorine gas in caustic soda or other basic aqueous solutions.

HOCl can also be made by dissolving dichloromonoxide in water (Using Hypochlorous Acid, Properties, Structure and Formula, SF).

The hypochlorous acid is only available as an aqueous solution. It is a colorless solution and its exact physical properties are variable as they depend on the concentration of the solution. The anhydrous or dry hypochlorous acid cannot be produced because the molecule is in equilibrium with its anhydride (National Center for Biotechnology Information., 2017).

HOCl is a strong oxidizing agent and can form explosive mixtures. It is also a reducing agent that can oxidize to the chlorine, chlorine, and perchloride forms of the acid. In aqueous solutions it dissociates as a weak acid partially in hypochlorite ion (OCl-) and in H +.

Hypochlorous acid is not considered harmful because it occurs in low concentrations in the human body and has an antimicrobial effect.

Hypochlorous acid reacts slowly with DNA and RNA as well as all nucleotides in vitro.

GMP is the most reactive because HClO reacts with both the heterocyclic NH group and the amino group.

Similarly, with only one heterocyclic NH group that reacts with HClO, TMP is the second most reactive.

AMP and CMP, which only have one slowly reactive amino group, are less reactive towards HClO.

UMP has been reported to be very slow to respond. The heterocyclic NH groups are more reactive than the amino groups and their secondary chloramines can give off the chlorine.

These reactions probably disrupt the base pairing of DNA and, in line with this, a decrease in the viscosity of DNA exposed to HClO, similar to that observed with heat denaturation, has been reported (Prütz, 1996).

The sugar residues are not reactive and the DNA backbone does not break. NADH can react with chlorinated TMP and UMP as well as HClO. This reaction can regenerate UMP and TMP and leads to the 5-hydroxy derivative of NADH.

The reaction with TMP or UMP is slowly reversible to regenerate HClO. A second, slower reaction that leads to cleavage of the pyridine ring occurs when excess HClO is present. NAD + is inert to HClO.

Over the past 15 years, the most advanced electrochemistry-based hypochlorous acid solutions have emerged as safe and viable wound cleansers and complementary therapies for treating infections.

The hypochlorous solution (HOCl) is a strong oxidizing agent and has a tendency to remove electrons from another substance. Its sodium salt, sodium hydroxide (NaClO) or its calcium salt, calcium hydroxide (Ca (ClO) 2) are commonly used in bleaches, deodorants and disinfectants.

HOCl is a natural part of the body in humans and animals and an important part of the innate immune system. HOCl is produced by neutrophils, the most common type of white blood cell in mammals. It is involved in the last step of the oxidative path in the fight against infections and the penetration of foreign substances.

When a cell detects the intrusion of a foreign substance, it undergoes phagocytosis, in which the neutrophil ingests and internalizes microorganisms or foreign particles. This phagocytic event leads to the secretion of reactive oxygen species and hydrolytic enzymes (Kavros, SF).

Oxygen consumption during the generation of reactive oxygen species, known as "reactive explosion", involves the activation of the enzyme NADPH oxidase, which produces large amounts of superoxide.

This highly reactive oxygen species decomposes into hydrogen peroxide, which is then converted into HOCl. HOCl exerts bactericidal properties and immediately destroys bacteria ingested by neutrophils. Despite the significant activity of HOCl against microorganisms, it is not cytotoxic to human or animal cells. This is likely related to its endogenous presence in the immune system of mammalian cells (Chanson Water Ionizers USA, Inc, 2016). 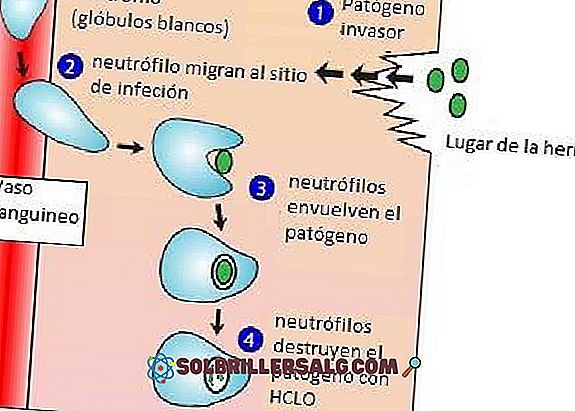 Recently, it has been suggested that bacterial inactivation by HOCl is the result of inhibition of DNA replication. When bacteria are exposed to HOCl, there is an abrupt decrease in DNA synthesis which precedes the inhibition of protein synthesis and is very similar to the loss of viability (Davies, 1988).

During the replication of the bacterial genome, the origin of replication (oriC in E. coli) becomes bound to proteins associated with the cell membrane, and treatment with HOCl has been observed to reduce the affinity of the membranes extracted for oriC, and this affinity decreases in parallel with the loss of viability.

In the work of Henry Rosen (1998) they compared the HOCl inhibition rate of plasmid DNA replication with different origins of replication and found that certain plasmids showed a delay in replication inhibition when compared to the plasmids that did was she contained oriC. Rosen's group suggested that inactivation of membrane proteins involved in DNA replication is the mechanism of action of HOCl.

Hypochlorous acid is used in organic synthesis to convert alkenes into chlorohydrins.

The hypochlorous acid reacts with the unsaturated bonds in the lipids, but not in the saturated bonds, and the ClO ion does not participate in this reaction.

This reaction is produced by hydrolysis with the addition of chlorine to one of the carbons and a hydroxyl to the other. The resulting compound is a chlorohydrin. Polar chlorine destroys lipid bilayers and can increase permeability.

When the formation of chlorohydrin occurs in the lipid bilayers of red blood cells, permeability increases. The interruption can occur when sufficient chlorohydrin is formed.

In the cosmetics industry, it is used as a skin cleanser, which benefits the body's skin rather than drying it out. It is also used in baby items because the baby's skin is particularly sensitive and can be easily irritated.

When treating water, hypochlorous acid is the active disinfectant in hypochlorite-based products (e.g. in swimming pools).

Recently, topical hypochlorous acid (HOCl) has been suggested for treating itching. Two mechanisms are suggested by which HOCl can reduce itching:

1) HOCl is microbicidal for skin pathogens, in particular Staphylococcus aureus with neurodermatitis.

2) HOCl is anti-inflammatory and reduces the activities of histamine, leukotriene B4 and interleukin-2, all of which are involved in the pathophysiology of pruritus.

There are conditions where HOCl can actually cause itching as an adverse effect. For example, HOCl increases the activity of the nerve growth factor, which promotes itching. Prolonged exposure or high doses of HOCl can also cause irritating contact dermatitis or, less commonly, allergic contact dermatitis (Robert Y. Pelgrift, 2013).