Iranian burns herself because of stadium ban

On September 1st, Sahar Khodayari doused himself with gasoline and set himself on fire in front of the Islamic Revolutionary Court in Tehran. The news of this desperate act last week shocked many Iranians. Only today did the Iranian media report that the woman died on Friday from her severe burns in the hospital.

Sahar Khodayari was 29 years old and did not want to go to prison. She could face up to six months in prison. Disguised as a man, she had sneaked into a football stadium. However, women and girls are prohibited from attending football matches in Iran. Sahar was a fan of the Esteghlal Tehran football club. The players wear blue shirts. With a long blue coat, she wanted to go to the stadium on March 12th to watch Esteghlal's game against Al-Ain from the United Arab Emirates. She was arrested and bailed a few days later, pending her trial on September 1st. 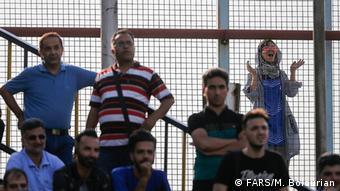 Scene from an Iranian football stadium

"She was not just the 'blue girl'. Sahar was the girl of a country where men decide what women should or shouldn't do. We are all responsible for their arrest and cremation," writes Parvaneh Salahshouri, leader of the women's group in the Iranian parliament , on her Twitter account. Reform-oriented MPs had raised the fate of the "blue girl" in parliament several times in the past few days.

"Your family has been warned and is no longer allowed to speak to the media," said Maziyar Bahari, an Iranian-Canadian journalist and filmmaker, in an interview with DW. Bahari is in direct contact with the Sahar's family: "Sahar died on Friday and the security authorities buried her immediately. The authorities told the family: 'Your daughter has caused us enough trouble, we don't want to hear from you any more.' The relatives were massively intimidated ". 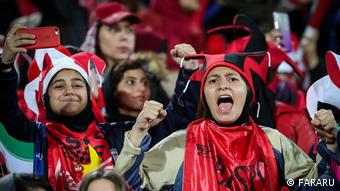 The Sahar Khodayari case has shaken Iranian society. The stadium ban for women is justified on religious grounds and has long been a sensitive issue in Iran. The government wants to hold on to this despite national protests. "In the current circumstances, the presence of women in the stadiums is not advisable," said Mahmud Waesi, chief of staff of President Hassan Ruhani. In principle, the government had no objections, but the "moral requirements" had to be met beforehand. But this is not yet the case because there are still "vulgar insults" from the male fans in the stadiums. Such an atmosphere is not suitable for Islamic women.

But many women do not want to accept that. You keep protesting in front of the stadiums and have contacted the world football association FIFA several times. At the 2018 World Cup in Russia, Iran was the only participating country with a ban on women in their own country. FIFA has asked Iran to lift the ban, otherwise the country's participation in the 2022 World Cup would be jeopardized. The moderate President Hassan Ruhani had tried several times to at least partially solve the problem: with an extra grandstand for women in various Tehran stadiums. So far, however, he has failed with these plans due to resistance from the clergy.

Now many Iranians are angry and desperate. Former national team captain Masoud Shojaei writes on Instagram: "The stadium ban for women is just disgusting and comes from lazy people." Dariush Mostafavi, former head of the Iranian Football Association, said in an interview: "The love of football is a pure love. The motto of the National Olympic Committee is freedom of the people. What will the world think of us when it finds out what is here has happened?"

And that is exactly what Iranian women want to communicate now. They write under the hashtag #BlueGirl in English on their Twitter accounts and carry the story of the "blue girl" into the world.