Why is there so much sinophobia

Sinophobia Everything, Everyone Begins With Home

If you walk five minutes along the rails of tram line 5 from the house in Cologne-Ehrenfeld, where I grew up, and turn two corners, you are at the Iltisstraße / Takustraße intersection. For years I waited at this intersection every morning at 7.35 a.m. on my bike for a friend with whom I then went to school together.

Takus Street owes its name to an outdated transcription of 大沽, a small suburb of the port city of Tiānjīn, which is called Dàgū in today's traditional romanization system. Dàgū lies at the mouth of the Hǎihé River into the Yellow Sea, and behind Dàgū, 160 kilometers upstream, lies Běijīng. The capital's only access to the sea is in Dàgū. In Dàgū there were also the Dàgū forts until a good hundred years ago: twenty-five large and small fortifications that guarded the river on both sides. Among the European gunboats that shot down the four hundred year old fortifications on June 17, 1900, the German S.M.S. Polecat emerged. And so the Iltisstraße in Cologne-Ehrenfeld is not called after an animal, but after a destroyer.

The SMS. In 1900, Iltis was in Hǎihé because the German Empire wanted a place in the sun. Since the British Empire had "acquired" the first "concessions" (in other words: miniature colonies) in Chinese coastal cities in 1842, the German elite had been calling for their piece of the cake - among others in the form of Max Weber, the founder of modern sociology, who, as chairman of the powerful All-German Society, dramatized access to the Chinese market as a question of survival. 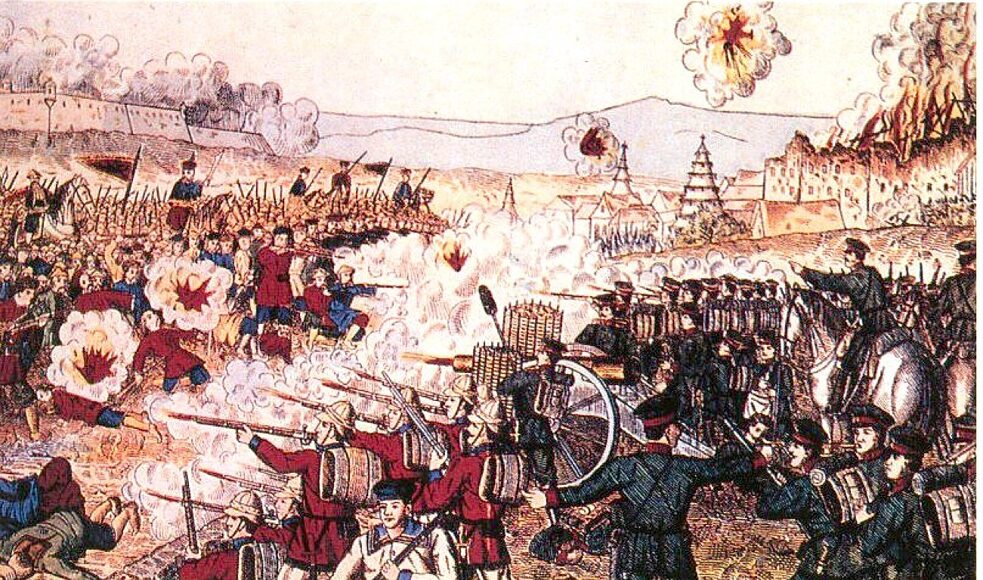 Fight between Allied and Chinese troops | in the public domain via Wikimedia Commons Under a pretext, the German Empire occupied the Bay of Qīngd bereitso in 1897, leased a few square kilometers of land and its 83,000 inhabitants and declared the whole thing to be the model colony of Kiautschou. “Model colony”, because they wanted to show that one could do colonialism better than anyone else with German thoroughness.

When a broad anti-colonial movement formed against their imperialism, the European colonial powers sent a “punitive expedition” to China. In this war of invasion, the German Emperor Wilhelm II said goodbye to the East Asian Expeditionary Corps with his infamous “Huns' speech”: “Pardon will not be given! Prisoners are not taken! [...] [M] may the name of Germans in China for 1000 years be confirmed by you in such a way that a Chinese never again dares to look peevedly at a German! "

I had no idea of ​​any of this on my way to school, and in history class I learned next to nothing about German colonial history and its excesses of violence. Not until many years later when I was looking for my book made in chinaresearched the history of the German-Chinese cultural exchange - which incidentally, contrary to the popular notion of China as the "Great Other", goes back many centuries - I laboriously gathered this information together. Since the beginning of the corona crisis, many commentators have been amazed at the anti-Asian racism that has apparently suddenly emerged in Germany. In fact, sinophobia has been such a natural part of our thinking for so long that we hardly notice it anymore. It can be found in our street names as well as in our nursery rhymes, in traditions such as the cliché yellowfacing about carnival, as well as in the coverage of China by numerous media, from the Bild newspaper to the daily topics.

In fact, sinophobia has been such a natural part of our thinking for so long that we hardly notice it anymore.

Sinophobic thought patterns are so ubiquitous because they are closely linked to the German and European history of ideas. The philosophy of the Enlightenment, whose ideal of the autonomous, rational individual shapes our thinking, our laws and cultural norms to this day, developed this ideal in contrast to China, which such influential thinkers as Friedrich Hegel itself as a country "outside of the World history ”: Because of their cultural imprinting through collectivism and passivity, the Chinese are forever trapped in bondage. This picture was later based on ideas of European superiority, which were used to explain why one had a right to colonize China and other “retrograde” cultures and thus to share in “progress”. We see updates of this phantasm of "oriental despotism" every day in media reports that present us Chinese as brainwashed subjects of their government without any ability to act or even an interest in it.

Part of this legacy is that German Sinology was originally founded as a colonial discipline that researched China primarily in order to be able to master it - for example at the Hamburg Colonial Institute, the forerunner of today's University of Hamburg. Sinophobic failures show again and again how far we are from coming to terms with German colonial history. Even for supposedly serious media like the Spiegel, it is still completely normal to use catchwords like that of the "Yellow Danger" - a term that was used by the writer Stefan von Kotze, a personal protégé of Otto von Bismarck, at the beginning of the 20th century Century in order to stir up resentment against China and to legitimize the colonial aggressions of European powers.

These are all stories of violence. There are other stories too: of friendships, of translating, of the conversation between languages ​​and cultures that has existed for hundreds of years. You are neither independent nor innocent of the former. But we can decide to tell it too, in order to expose the sinophobic construction of China as the “Great Other” of Europe for exactly what it is: a lie.

Lea Schneider (* 1989 in Cologne), after long stays in China and Taiwan, lives as a freelance author, translator and critic in Berlin. Her literary work ranges between poetry, essay and translation, but she prefers to mix all three forms into something new. Her translations of contemporary Chinese poetry into German have received a grant from the German Translation Fund and the Poetry East West Translation Award; for her own works she received the Dresden Poetry Prize and the Berlin Art Prize, among others. Most recently published by her at Verlagshaus Berlin: CHINABOX. New poetry from the People's Republic (2016) and made in china (2020).