Which occupations have the lowest fluctuation rates?

Almost a third of jobs subject to social security contributions ended or started in the past year - in 2011 the fluctuation rate was 27 percent. This development was to be expected, because experience shows that the better the labor market runs and the lower the unemployment rate, the more likely employees will dare to jump into another job.

With every new start, there are always risks associated with opportunities. Company-specific knowledge and skills are initially lost, a trial period shortens the usual notice periods and it must first be proven whether the new job suits you. If unemployment is high, there is a greater risk of being left with no alternative if the switch goes unsuccessful. It is also important that in good times the number of job offers is higher than in a crisis.

In the public administration, only 13 percent of the jobs are filled every year - apparently a position at Father State is still designed to last forever. In temporary work - at the other extreme - the staff is completely changed once a year (graphic). Often it is the temporary workers themselves who want to move to another industry or who are taken over by the customer company - which, statistically speaking, belongs to a different industry. 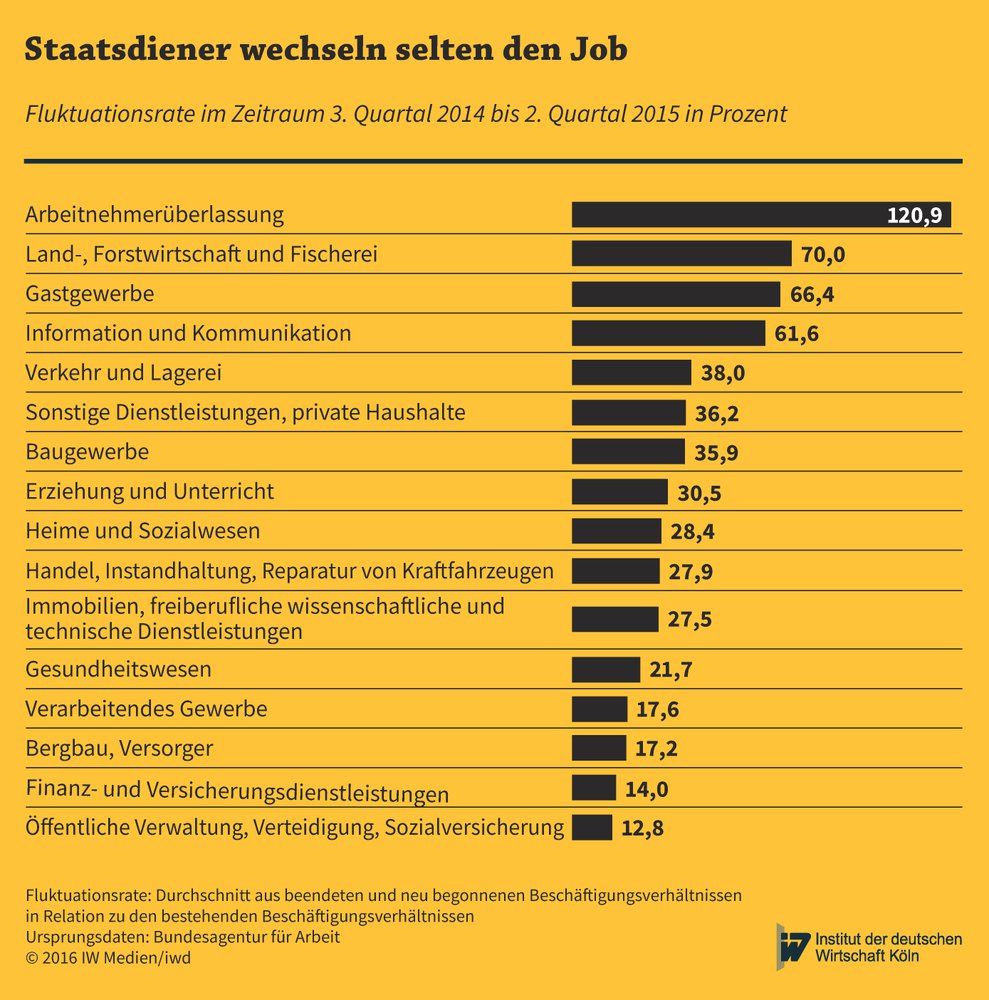 The fluctuation is usually high in those industries and sectors in which specialized knowledge does not play a major role and there is also a strongly fluctuating demand for labor, e.g. in agriculture or in the hospitality industry. Employees in these industries run a lower risk when changing jobs because they lose little specialist and company-specific knowledge. At the same time, many of these jobs are only temporary, for example in the case of harvest workers in agriculture.

Low fluctuation rates can be seen in sectors in which skilled workers are scarce and in great demand - for example in the metal and electrical industries.

This relationship is confirmed when one looks at the level of professional demands. In jobs at the helper level, which usually do not require a completed vocational training, the fluctuation rate is well above the average, with a higher requirement level it is the other way around. Jobs in technical development, construction and production control show the lowest fluctuation at 15 percent.

The region also makes the difference

The respective industry structure largely explains the regional differences. The fluctuation is highest in the city-states. In Berlin, for example, 44 percent of new jobs are concluded every year, in Bremen it is even 54 percent. The high proportion of service industries with high fluctuation has an impact here.

On the other hand, fluctuation is below average in Baden-Württemberg and Hesse, i.e. countries with a lot of industry.

From an operational point of view, low fluctuation is often aimed for, because new employees naturally have to be acquired and trained at great expense. The crisis in 2009 showed that many companies hold on to their employees even when there is actually no work for them: despite a 5 percent drop in production, employment remained almost unchanged. Securing the skilled labor base in the long term was more important than short-term profitability.

Sometimes the thesis is put forward that fluctuation is increasing in the economy as a whole, because employees are increasingly working in insecure employment relationships and, like modern nomads, have to move on from one temporary job to the next. The statistics do not support this thesis. On the contrary, the average length of service of all employees is even increasing slightly.

This development is partly the result of the age structure effect: because the proportion of older employees increases at 67 for demographic reasons and because of the pension, and because they have naturally been with the company longer than younger people, the average length of service also increases.