Hub, switch, router? - This is how networks work! 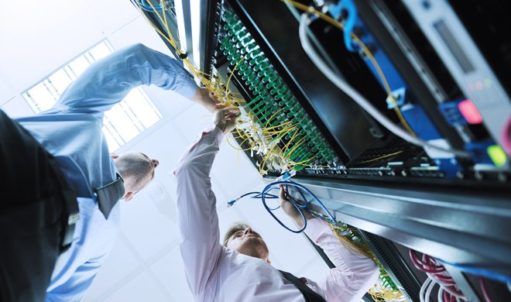 Every day we are surrounded by networks that have become an indispensable part of our daily work (life). In parlance, a network is understood to mean the Internet, but this is not correct. The following article explains what a network is and how computers and networks can be connected to one another.

A network connects two or more computers with each other in order to exchange information and share resources. A rough distinction is made between a private and a public network.

example: Alice, Bob and Eve live in a shared apartment and would like to use a printer together. You connect to a local network within your WG (LAN) and can use resources together without being connected to the Internet.

In a network, the computers often have different tasks. The server provides services and answers inquiries. The client uses these services by accessing the server's resources.

A peer-to-peer network, on the other hand, exists when all computers have both client and server functions.

The hub connects several computers in a computer network so that they can communicate with each other. A hub works exclusively on level 1 of the OSI model. The disadvantage of a hub is that it forwards the information to all connected computers and can either only receive or send messages.

Example: Bob wants to send a love letter to Alice. He writes and sends his love email, which is first forwarded to the hub. The hub asks both Alice's computer and the jealous Eve's computer whether these are recipients. The Eve calculator refuses, the Alice calculator agrees. However, there is a risk that IT-savvy Eve could intercept the message.

The switch (the smart hub), on the other hand, checks to which computer it should forward the information. Other computers are not requested. A switch can also send and receive messages at the same time. This works on level 2 of the OSI model, so it decides on the basis of the Mac address to which computer it sends the message.

In our example the switch forwards the love message from the Bob computer directly to the Alice computer. This increases data security because the Eve computer itself is not queried.

The router connects several independent networks with each other that have different protocols and architectures. The router is often known as e.g. the Fritz! Box. Usually the router connects the private network (LAN) with the Internet (WAN). Several computers from the private network should be connected to the Internet via the same connection (gateway). The router knows which computer has requested which address on the Internet and can send the requested answer back to the relevant computer. A router works on level 3 of the OSI model (i.e. IP addresses).

In our Example flat share all three computers do not go directly to the Internet, but via a router. If Eve illegally downloads music files, the router knows that it should forward the music packets to the Eve computer. The music industry, on the other hand, does not know who downloaded the file, as only an IP address is visible to the outside world (usually only the subscriber is given a nice letter).

Routers have a firewall so that the virus-contaminated music files cannot get into the local network. We will explain in a separate article what a firewall is and how you can generally protect yourself against dangers from the Internet.

Data protection and IT (security) serve to protect privacy and corporate values. Maintaining these interests and working in two diverse and interesting areas at the same time is my passion. more →

As experts in data protection, IT security and IT forensics, we advise companies across Germany. Find out more about our range of services here:

Do you have any suggestions for topics or improvements? Contact us anonymously here.
<?