When was the first iron cladding built?

The Iron bridge is the world's first cast iron arch bridge. It has spanned the Severn since 1779 at Ironbridge, south of Coalbrookdale in Shropshire, England, named after the bridge. It was therefore originally (and occasionally still is) Coalbrookdale Bridge called. Originally called Severn Gorge designated gorge was named Ironbridge Gorge. Ironbridge Gorge, together with the bridge and the industrial settlements of Ironbridge, has been on the UNESCO World Heritage List since 1986.[1]

Cast iron bridge over the Severn 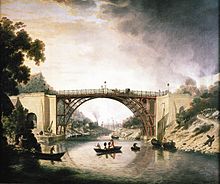 The Iron Bridge in a painting by William Williams (1790)

Until the bridge was built, ferries were the only way to cross the Severn Gorge, but the iron industry grew strongly in the 18th century and required a more reliable and faster route. The idea of ​​an iron bridge was probably developed from 1773 onwards.[5] The idea probably goes back to the local iron producer John Wilkinson in collaboration with the architect Thomas Farnoll Pritchard.[6] Pritchard created various designs for the bridge in 1775. Abraham Darby III was responsible for the final design and execution, but could also have helped develop the idea.[5][6] Construction took only three months and was completed in the summer of 1779.[4] According to other sources, construction began as early as 1777, but this could also mean the beginning of the production of the castings.[6][7]

Since there was no previous experience of building bridges with iron, methods from the carpentry trade were used. The exact events from the year of construction 1779 have not been handed down. The first of two arches spanned the river Severn on July 2, 1779.[4] Then the access roads still had to be built. The bridge was opened on New Year's Day 1781.[4]

Only a few years after completion, the iron found itself cracked due to movements in the foundation, and in 1802 the stone southern arch had to be replaced by a temporary wooden structure, in the place of which an iron arch was finally installed in 1820.[4]

The last major work on the foundation took place in 1972, after road traffic over the bridge had ceased in 1934 and pedestrians had to pay tolls until 1950. The bridge has been owned by Shropshire County Council since 1950.[4]

In November 2017, the Hermann Reemtsma Foundation in Hamburg provided one million euros to save the Iron Bridge in Shropshire.[8]

Today, a number of museums can be found in the Severn Valley that deal with the age of early industrialization. These include an 18th century iron smelting furnace, the Blist Hill Open Air Museum with exhibitions on the Victorian era, the Coalport China Museum (porcelain), the Rosehill House (museum about everyday life in the 18th century) and a brickmaking workshop . The Iron Bridge over the Severn and the museum network are anchor points of the European Route of Industrial Culture (ERIH).

The replica in Wörlitzer Park

A scaled-down replica was built in 1791 in the Wörlitzer Park near Dessau, which is also part of the World Heritage. This makes it the oldest cast iron bridge on the European continent.