How is a scented candle made

How scented candles pollute the air in a room

Scented candles are particularly popular around Christmas time. For many, the warm light and the aromas are part of the homely atmosphere in Advent. But scented candles pollute the room air, not everyone can tolerate the smells. The ingredients in the candles can cause headaches, dizziness and even allergies.

Women between the ages of 19 and 49 buy most of the scented candles, often spontaneously while shopping in large furniture stores, according to a survey by the candle industry. Almost 1.5 kilograms of candles are used per person per year in Europe, around 15 percent of which are scented candles. The demand is increasing, the choice is increasing. The prices are also up: Noble designer scented candles cost up to 150 euros per piece.

Headaches and allergies from fragrances

The fragrances not only convey the Christmas spirit, sensitive people can react with shortness of breath, dizziness, watery eyes and headaches. "The fragrances are considered to be allergy triggers, which can lead to irritation and eczema if they come into contact with the skin," says Harald Brugger, chemist at the Vienna environmental consultancy.

A cozy atmosphere can be created with candles

Soot and fine dust are created as soon as an unscented candle is burned. In the case of scented candles, the added aromas would form additional chemicals during combustion, which pollute the room air and irritate the mucous membranes, according to the chemist. It doesn't matter whether the fragrances are synthetically produced or natural.

Around 2,500 chemicals are used to perfume candles. 26 of them are considered to be particularly allergenic, especially cinnamon and citrus scents. In contrast to cosmetics, fragrances do not have to be declared for candles. However, many manufacturers would go over to voluntarily referring to allergenic fragrances in their products, so Brugger.

"Hands off the scented candles," advises the environmental expert, despite the better labeling. It is best to avoid scented candles in general. After nickel, fragrances are now the second most common cause of contact allergies. A pre-Christmas room fragrance can also be conjured up with less harmful ingredients.

Beeswax and fir twigs as alternatives

The environmental advice advises to put organic orange slices on the heater and to put fir branches in the room. Candles made from 100 percent beeswax are the best and most natural alternative to scented candles, according to Brugger. However, good beeswax candles have their price. "A beeswax candle weighing 200 grams costs around ten euros," says Kurt Wilhelm, who himself makes candles from 100 percent natural beeswax in his Wald & Wiese store in Vienna. But these candles would burn longer and give off a natural aroma of bee pollen and honey, says the trained beekeeper. 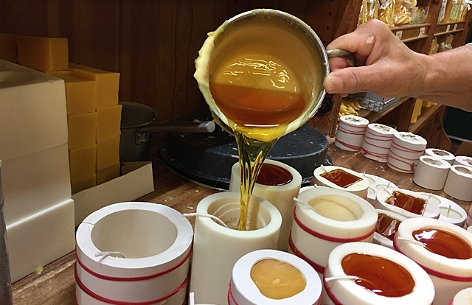 The hot beeswax is poured into the prepared molds

The small producers could not keep up with the cheap competition of large chains. Beeswax candles account for only 0.5 percent of the market; the vast majority of candles are made of paraffin or stearin. The production of beeswax candles is complex. “In our shop we can pour six large candles per hour by hand,” says Wilhelm.

Ventilate after scented candles have burned down

The bees have to pollinate 50 million flowers to produce one kilo of beeswax. That's the equivalent of five kilos of honey. You can recognize good beeswax candles by their natural color. “Everything that turns reddish or completely orange is mostly colored,” says Wilhelm. White beeswax is produced without chemicals using activated carbon filters. Heavily bleached beeswax candles lose some of their essential oils. High-quality beeswax candles should burn almost soot-free, which also depends on the quality and the correct size of the wick. "With the wrong wick, the beeswax candle can also turn into a sucker," says the beekeeper. 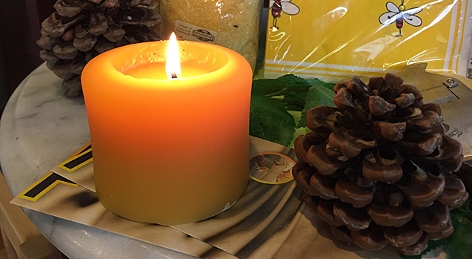 Good beeswax candles burn longer and don't give off soot

If you want to use scented candles despite health concerns, you should at least be considerate of sensitive people and ventilate the living space thoroughly after use, advises the environmental consultancy. “Instead of simply covering up bad smells, it is more important to first remove the source of the stink,” says Brugger. Natural essential oil, which can evaporate in the room without heating, is also a good alternative. "Two or three drops on a pumice stone or in a bowl of water are sufficient," says the environmental consultancy.

More on the subject: