Who Owns Street Parking Spaces in the United States

Future of mobility: on the sunny side of the road

The motorway of the future will have a surface made of glass, a heater against ice and snow, traffic warning signs integrated into the lane and sensors for monitoring the flow of traffic. It also produces clean electricity from sunlight - in such quantities that even an industrialized country like the USA could do without fossil fuels entirely. Scott Brusaw would like to implement what sounds like science fiction soon: The engineer from Sagle in the US state of Idaho wants to pave the highways of the USA with solar modules he has developed and thus transform the road network into a gigantic solar power plant.

"Solar Roadways" is the name of his concept, for which he was at least able to inspire the experts of the responsible US authorities: the Federal Highway Administration (FHWA) has provided almost one million US dollars in the past three years. Money with which Brusaw was able to realize the first prototype of its solar roadway module. "In the long term, we would like to equip all concrete and asphalt surfaces that are exposed to the sun with our modules," says Brusaw, describing his vision on the project's website. "That would make us independent of any kind of fossil fuel." 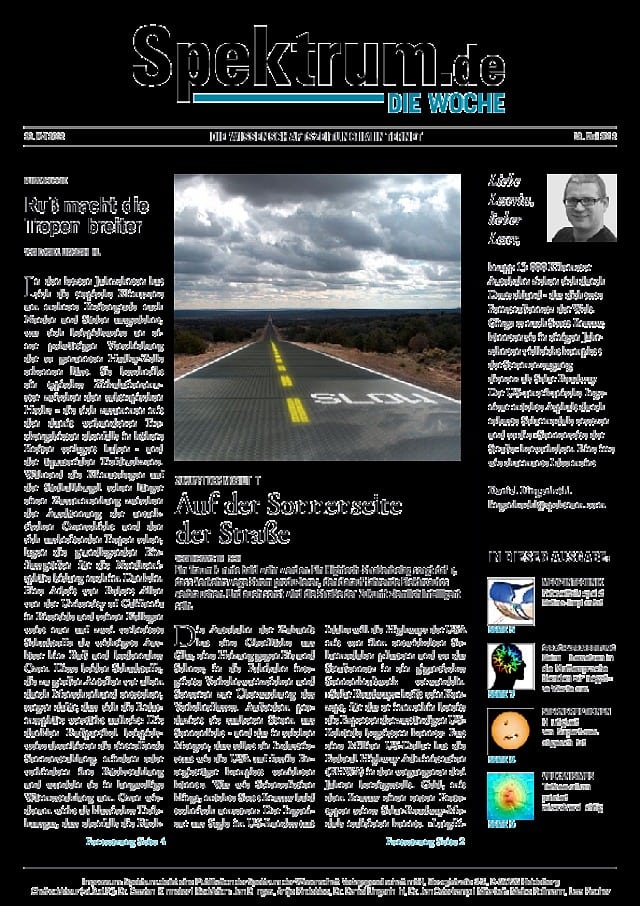 At the heart of the Solar Roadway are three by three meter modules made of extremely hard glass, full of high technology: solar cells for electricity production, LEDs for street lighting and for displaying warning notices for road users, heating elements as well as sensors and microprocessors for recording and controlling the flow of traffic. And these modules should not only be used on US highways: streets, parking lots, sidewalks and bicycle paths, practically every surface that can be driven on or walked on should become a solar roadway - that is the idea.

Parking spaces as an experimental field

Brusaw calculates that the USA, excluding Alaska and Hawaii, has around 75,000 kilometers of freeways. According to Brusaw, if this area were to be completely expanded into a solar roadway, the amount of electricity would be three times the annual consumption of the entire United States. "This renewable energy would make us independent of fossil fuels in electricity production once and for all," said Brusaw.

Of course, the engineer is aware that not all of North America can be transformed into a gigantic solar power plant overnight. And so his company has set itself the goal of marketing the solar modules as a covering for parking lots in supermarkets, fast food restaurants or highway rest stops. The electricity generated in this way could make the buildings independent of the public grid. And a shopping spree or a stop at a rest area would give owners of electric cars the opportunity to "fill up" their vehicle with solar power.

Just as the solar roadway would be the natural playground for the electric car: Since electricity is in abundance, not only every stop could be used for charging. On roads that have been converted into solar roadways, vehicles can be supplied with electricity by induction even while driving. "That would lift the range limitation of electric cars. People would be more willing to buy one with an electric drive instead of a vehicle with a combustion engine," says Brusaw with conviction.