Which Scandinavian country is the coldest?

Finland lies in the cold-temperate climate zone and the weather is shaped by maritime and continental influences. With westerly winds, low pressure areas approaching from the Atlantic ensure changeable weather. On the other hand, stable high-pressure bridges that extend from mainland Russia ensure cold, dry winters and warm summers. In Helsinki, the summer highs regularly rise to more than 20 ° C.

The land mass of Finland extends between the 60th and 70th parallel and the north-south extension is more than 1,000 kilometers. This results in a clear temperature gradient between the southern parts of the country and the north. While the annual average temperature in the south is +5 ° C, it only reaches -2 ° C above the Arctic Circle in Finnish Lapland. The differences in the length of winter are correspondingly large. In the north, the country is buried under a thick layer of snow for around 200 days, while in the western Finnish archipelago it is 100 days less.

In winter, a closed snow cover forms across the country, reaching a thickness of 20-30 cm in the south and 60-90 cm in the north. The inland lakes freeze over by December at the latest and only thaw again in May. It is not uncommon for the Gulf of Finland and Bothnia to freeze over and the ports have to be kept free of icebreakers. The Finnish cold record is held by the municipality of Pokka in the Kittilä region. On January 28, 1999, -51.5 ° C was measured here.

Summers are short in Finland and last from June to August in the north of the country and from late May to mid-September in southern Finland. In the capital Helsinki, the daytime temperatures in July and August are over 20 ° C and up to 15 summer days are counted annually on which the temperature reaches values ​​of 25 ° C and more. Especially in inland Finland it can get up to 30 ° C under stable high pressure in summer. The front runner in summer highs is the place Liperi, where on July 28, 2010 a maximum temperature of 37.2 ° C was measured.

The following overview refers to the weather in the Finnish capital Helsinki in southern Finland.

Weather in Finland in January

January, along with February, is one of the coldest months in Finland. The average daily temperature in Helsinki is -3 ° C and in the south of the country there is a closed snow cover. Temperatures below -15 ° C are not uncommon in January. With 44 mm, the precipitation is about the annual average.

Weather in Finland in February

The daytime temperatures in February are at the same level as in the previous month, but the average minimum temperature is about one degree lower. Cold spells can temporarily drop the values ​​in Helsinki to below -30 ° C. February is the coldest month in Finland and the driest month with an average of 34 mm of snow.

Weather in Finland in March

March counts as the winter month in all parts of Finland, although the end of the month marks the beginning of spring. Daytime temperatures rarely climb above freezing. There is consistently light to moderate frost at night. On an average of eight days, 35 mm of precipitation falls mostly as snow.

Weather in Finland in April

In April winter draws to a close and daytime temperatures in Helsinki reach an average of 7 ° C. Light frost must be expected throughout the night. The closed snow cover begins to melt and the amount of precipitation is at a similar level as in March.

Weather in Finland in May

The last remnants of snow melted in the southern Finnish interior in May and nature comes to life. There is a significant jump in temperature and the air warms up to 15 ° C during the day. The amount of precipitation in Helsinki is still below the annual average.

Weather in Finland in June

In June the temperature reaches 20 ° C in southern Finland and the day length at the time of the summer solstice is 18.5 hours. The wettest time in southern Finland begins in June. It rains an average of eight days, and rapid weather changes are not uncommon.

Weather in Finland in July

July is the warmest month in the Scandinavian country. Stable high pressure areas can cause daytime temperatures to climb up to 30 ° C. Even at night it doesn't get completely dark as the sun only sinks behind the horizon for a short time. At 69 mm, the amount of precipitation increases significantly.

Weather in Finland in August

With an average of 20 ° C, it is still comparatively warm in August in the southern Finnish coastal areas. August is the wettest month. Low pressure areas move in from the west and bring rain to the country on an average of 11 days. At 15 ° C, the water temperature in the Baltic Sea is the highest year-on-year.

Weather in Finland in September

September is a humid month and the average daytime temperatures are only 14 ° C. The weather is changeable and autumn is coming. Low pressure areas from the Atlantic bring humid air masses and there is an average of 69 mm of rain.

Weather in Finland in October

Storm lows over the Baltic Sea herald the approaching winter in southern Finland. The air in Helsinki warms up to values ​​around 8 ° C during the day and can drop to below freezing point in a few nights. With 75 mm of precipitation, almost the same amount of rain is achieved as in August.

Weather in Finland in November

The first snowfalls can be expected in southern Finland in mid-November. During the day the temperatures are only slightly above freezing point and at night they drop below 0 degrees. A closed snow cover had formed by the end of November, and it will only begin to melt again at the end of March.

Weather in Finland in December

With an average daytime temperature of -1 ° C, December is one of the coldest months in the Scandinavian country. At night there is light to moderate frost and the inland lakes freeze over. The day length in the southern parts of the country is around six hours at the winter solstice, while the polar night has arrived in northern Finland.

Due to the location in northern latitudes, the midnight sun can be seen in the areas north of the Arctic Circle in summer. Even in southern Finland there are the so-called “white nights” between the end of June and mid-July, as the sun only sinks briefly behind the horizon.

The best travel time for trekking tours and canoe trips is between the end of May and the end of August. Rapid weather changes are characteristic of the weather in Finland. For this reason, warm, weatherproof clothing, in addition to t-shirts and sunglasses, should not be missing in your luggage in the summer months. The ski season in the Scandinavian country lasts from November to April.

Upload your Finland photo and show it to other Finland fans 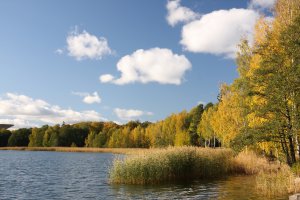 Here you can upload your Finland photos and share them with other Finland friends. Your pictures will be displayed on Skandinavien.eu and can be seen and liked by others.
<?