Why are European countries so against immigrants

Ceuta: EU calls on Morocco to take back migrants

Ylva Johansson knits while listening to MEPs debate in the Brussels European Parliament. Maybe to calm your nerves. The EU commissioner for home affairs, responsible for migration, has no easy portfolio.

Not per se. The 27 countries of the European Union are too divided. Some want more help, others don't want to take in refugees. Migration is always an important issue in the EU, but also one that occasionally disappears from the spotlight. Only to then play an even bigger role on the EU stage.

For example right now. Since the beginning of the week, around 6,000 migrants have arrived in Ceuta, a Spanish exclave in North Africa, the EU's only land border with Africa. Many swam through the sea from Morocco at night or ran at low tide so as not to have to climb over the fences that surround the city. 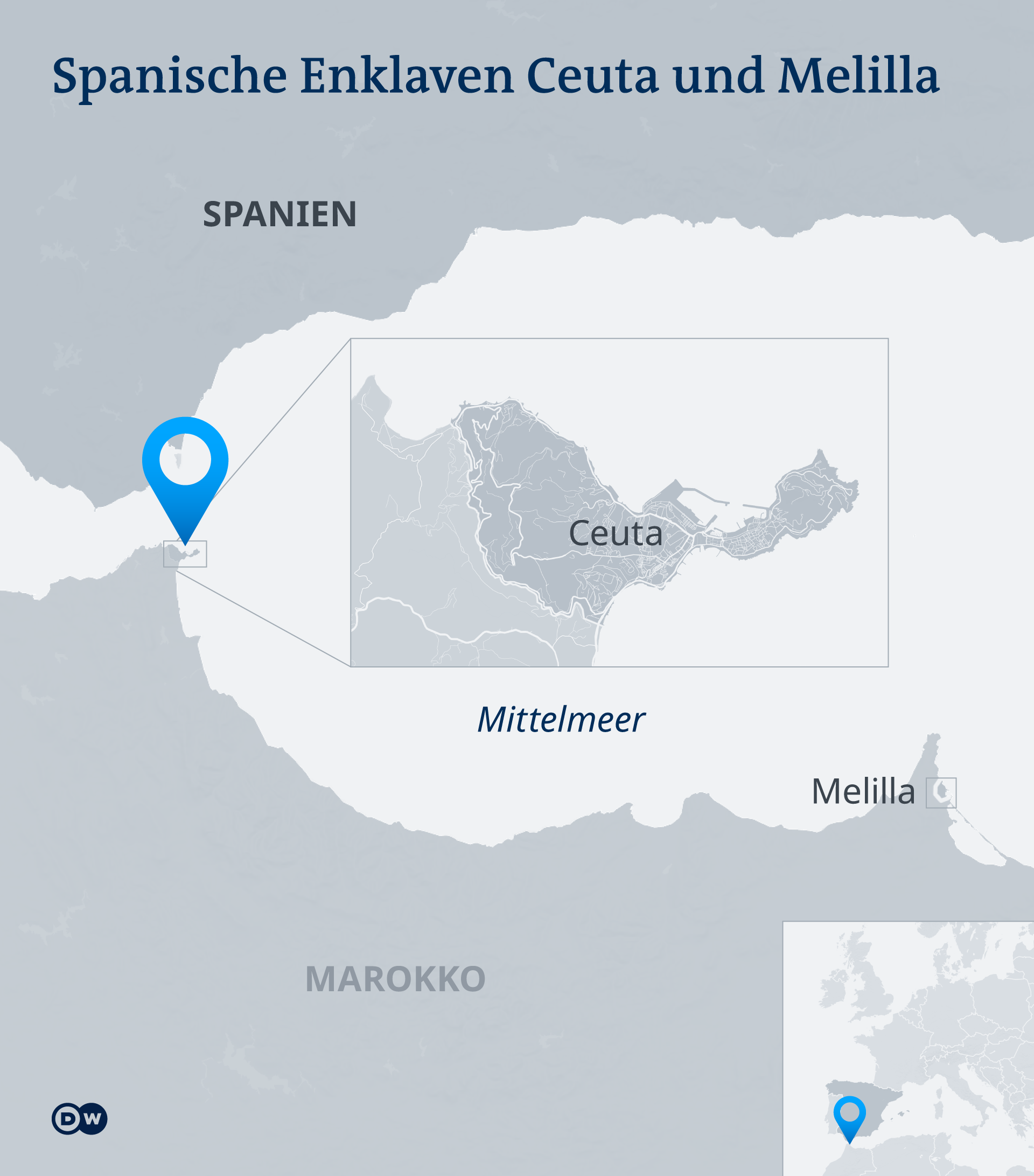 The fact that people from Morocco or other African countries are trying to get into the EU via Ceuta - or the second Spanish exclave Melilla - is nothing new. According to the Spanish media, there have never been so many in one day.

EU Commission concerned about the situation in Ceuta

EU Commissioner Ylva Johansson speaks of "unprecedented irregular arrivals" in Ceuta. It is worrying that so many people, including a high proportion of children, are putting their lives at risk. Many should have been saved, one person died.

"The most important thing now is that Morocco continues to prevent irregular departures." In addition, people "who do not have the right to stay must be organized and effectively repatriated," said Johansson. 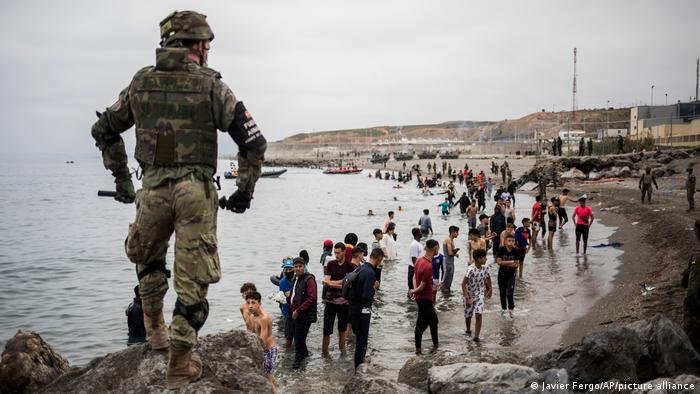 85,000 people live in the Spanish exclave of Ceuta

In a "mobility partnership" concluded with the EU in 2013, Morocco actually committed itself to fighting illegal migration more intensely. In return, Moroccans can enter the EU more easily. In 2019 alone, the EU granted Morocco 101.7 million euros to combat smugglers and irregular migration.

Because of this deal - and a high fence that surrounds Ceuta and Melilla - Moroccan security forces had mostly stopped migrants beforehand. The reason they let the thousands of people pass this time could be a diplomatic dispute - between Spain and Morocco over the independence of Western Sahara.

"Morocco plays with Spain and the entire European Union"

In the Brussels European Parliament, the Spanish MP Maite Pagazaurtundua from the liberal Renew group says that Morocco is playing with Spain and the entire European Union. The EU finally needs a common asylum policy in order not to be exposed to this type of blackmail.

And in fact, the 27 EU countries, the European Parliament and the EU Commission, the bloc's executive branch, have been wrestling for years over models that regulate migration and asylum in the EU better than is currently the case.

One attempt is the new migration pact that EU Commissioner Ylva Johansson presented in September last year. She emphasized in particular that the EU's external borders must be secured - and people who have no right to asylum must be returned to their countries of origin as quickly as possible. 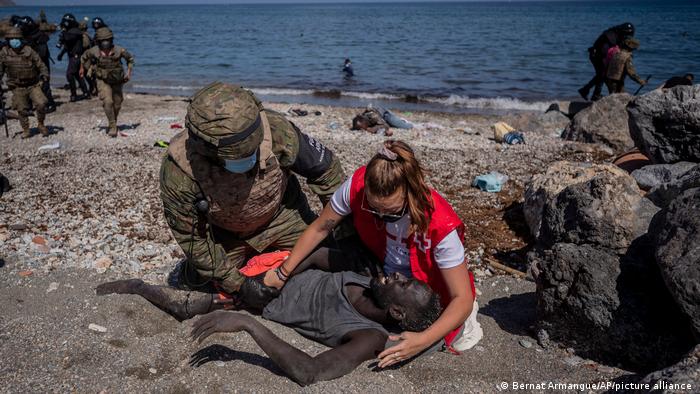 For both projects, the European Union is dependent on other states, countries like Turkey and Morocco, for example. While EU MPs like the Austrian Harald Vilimsky from the right-wing FPÖ see only one solution to the current situation in Ceuta, namely "that Europe has to close its borders", others see the problem in cooperation with some non-EU states .

"In Ceuta we are watching what happens when the EU outsources its external borders to dictators," says the Spanish MEP Miguel Urbán Crespo from the Left Group.

He means, on the one hand, violence, arrests and harassment against migrants on the Moroccan side - allegations that are supported by reports from the media and NGOs. On the other hand, the fact that many people are turned back directly, sometimes violently, at the border without being able to apply for asylum. 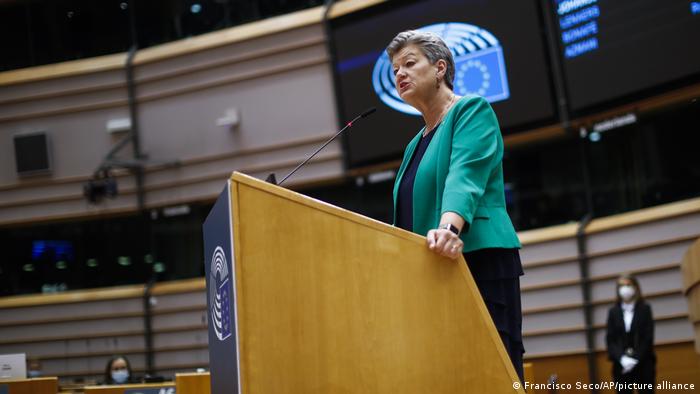 EU Commissioner Ylva Johansson in the EU Parliament in Brussels

What aid organizations interpret as an attempt to legalize so-called pushbacks, the European Court of Human Rights (ECHR) assessed as not illegal in early 2020. The reason: The migrants did not use legal opportunities to enter the EU. However, according to NGOs, asylum seekers are often prevented by the Moroccan police from reaching border crossings where this is exactly possible.

With her migration pact, EU Commissioner Ylva Johansson also wants to ensure more legal routes into the EU. When it comes to migration and asylum, the EU must do something now. "And we're doing something right now," she says in Brussels. For the migrants in Ceuta, this means that they should get back to where they came from as quickly as possible.