Why is Chicony successful in mainland China

Who actually builds all of the digital compact cameras that are sold under so many brand names? - Practically all models today come from China, and the number of manufacturers is significantly lower than the variety of brands might suggest:

Seven ODMs (Original Design Manufacturers) or OEMs (Original Equipment Manufacturers) now share the production of digital compact cameras for the mass market. Not only do almost all private labels come from their ribbons, but also many models from well-known Japanese manufacturers. Most of these camera models are produced in one lot over a period of around six to twelve weeks. This is followed by the next model or brand.

Some manufacturers such as Skanhex Technology Inc. and its subsidiary Sinpo Optical Co. Ltd., which produced numerous models for Minolta, Rollei and various brands in the early days of digital cameras, have now largely disappeared from the scene. The World Wide Liceneses Ltd. from Kowloon, Hong Kong, which was shipwrecked in 2005 with the Polaroid x530 equipped with a Foveon sensor, has apparently withdrawn from the camera business. The company and the new factory in Shenzen were sold to Flextronics Sales and Marketing (A-P) Limited by the owner at the time, The Character Group plc. It was not possible to determine whether Tekom Technologies, Inc., founded in 1996 with headquarters in Taipei and a factory in Quangdong, is still active as a camera manufacturer. Also the manufacturer W. Haking Enterprises Ltd., who was still known from the analogue era. from Hong Kong, which was still represented at photokina 2008, it has now become a bit quiet again. Instead of a stand at the trade fair, Haking only booked a suite at the Marriott Hotel this year. (See also: Haking - the legend lives on)

The Japanese company Sanyo, which is now part of the Panasonic group, has also largely given up the OEM business for the better-known camera brands.

Foxconn, which is mainly known in Germany as a manufacturer of products from the American manufacturer Apple, was founded in 1974 by Terry Gou with start-up capital of US $ 7,500 and in 2006 with the takeover of Premier Image Technology Corp. abruptly to become the largest manufacturer of digital compact cameras. 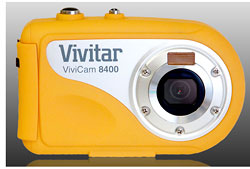 Premier Image Technology Corp. was Premier Camera Taiwan Ltd. in 1983. was founded. The first products were a disc and a pocket camera. The company drew attention to itself with the installation of an electric film transport motor in a pocket camera and expanded its range in 1986 to include 35mm cameras and in 1996 to APS cameras. The first digital compact camera and the listing on the Taipei stock exchange followed three years later. In the following year, the Pretec Corporation, a competitor in the emerging digital camera market, was taken over and Premier became the largest digital camera manufacturer in Taiwan, producing for Ricoh, Pentax and Rollei as well as for private labels such as Traveler.

With the takeover by Hon Hai in 2006, the name Premier disappeared from the scene, the cameras are now produced under the name Foxconn. As before, however, they will be marketed under the names of the established trademarks. As a result of the integration into the Hon-Hai Group, Premier can fall back on its digital manufacturing know-how and Hon Hai has gained access to the optical area through the integration.

Together with the German Metro Group, Hon Hai / Foxconn has founded a joint venture in China, which will open its first Media Markt on November 17, 2010 in Shanghai. The sales area of ​​the market is 18,000 m2. By the end of next year, Media Markt plans to set up 9-11 stores in the Shanghai area and, according to Foxconn, the number should be expanded to at least 100 stores across China by 2015.

Altek was founded in 1996 as a joint venture between the Yulon Group and the China Development Industrial Bank. The focus of the company, based in Hsinchu Science Park, has been the development and manufacture of digital cameras from the start. The company has been listed on the Taipei Stock Exchange since 2002. In 2008 the company is said to have become the world's largest ODM manufacturer for digital cameras. According to the information available, cameras manufactured by Altek are sold by HP, Kodak, Pentax and, in the future, probably also by Nikon and Samsung.

The Altek Corporation claims to have 5,500 employees. Research and development takes place at the Altek Research & Development Center in Taipei, Neihu (Taiwan) and at the Los Angeles office. Production has been taking place in Kunshan near Shanghai since 2000. The production capacity is now expected to be 3 million pieces per month. In 2008 Altek presented the first camera with integrated GPS and intends to integrate further functions into the devices in the future. Altek is also moving from manufacturing digital cameras to manufacturing digital video cameras. (See also: Altek on the rise)

Ability Enterprise was founded in 1965 in Taipei by the two brothers Tong Ching-Hsi and Tong Chiung-Shiung. The business purpose was the distribution of Canon pocket calculators in Taiwan. Later the range would be expanded to include more office technology from the Canon range. These included copiers and printers and the American NEXT computers. The company has been listed on the Taipei Stock Exchange since 1995.

In 2001 Ability increased its involvement in the subsidiary AVY Industrial Co., Ltd. founded in 1975. AVY Precision Technology Inc., which belongs to the group, is a supplier to the camera industry. It started with cuttings for the camera leather and housing parts as well as micro-motors. Today in factories on the Chinese mainland China, for example, housing shells for Nikon Coolpix or Casio Exilim cameras are produced.

After 2001 Ability took a stake in Minton Optical Industrial Ltd. or Minton Optic Industry Co., Ltd. Minton was founded in Taiwan in 1985, produced analog 35 mm cameras and later digital compact cameras, and supplied numerous brands worldwide as an OEM / ODM manufacturer. By the year 2000, Minton had four plants with a production capacity of 700,000 analog and 200,000 digital cameras per month. Minton cameras sold under the name "Brica" ​​in Asia. In Germany, Ability got involved with Grandtech GmbH in Jena, which sells cameras under the “Jenoptik” brand: the eventful history of the Jenoptik brand.

Asia Optical was founded in Taiwan in 1981 as an optical products manufacturer. In 1982 the company started supplying lenses for 35mm auto focus cameras to Ricoh Taiwan. For Kenko Co., Ltd. and Tasco, telescopes were produced in the following years. A joint venture for auto focus camera production emerged from the supply for Ricoh. In 1999, Hang Zhou Nikon Camera Co., LTD was founded together with Nikon. for the manufacture of camera lenses. In 2004, Asia Optical acquired 85.5% of Taiwan Ricoh Co., Ltd.

After an optical production facility for riflescopes had already been set up in the Philippines, Asia Optical founded Myanmar Asia Optical International Co. Ltd in 2004. (MAOI). The aim was to produce around 10 million lenses per year in the factory in the Mingalardon Industrial Park near the capital, Rangoon, with 5000 employees. In 2008, however, only 2,500 Burmese were employed, producing 100,000 lenses per month. The lenses come onto the market under the brands Ricoh, Canon, Nikon and Olympus. When the plant was founded, Sony, Panasonic, Kodak and Konica were also named as customers.

In 2009, Asia Optical took over the majority of Flextronics' camera plant, which was incorporated into AOF Imaging Technology. Flextronics took a 20% stake in the AOF joint venture. Flextronics itself bought the division from Kodak in 2006. The unit goes back to the former Japanese camera manufacturer Chinon.

Chinon Industries Inc. was one of the leading manufacturers of house brand cameras alongside Cosina. As an OEM manufacturer, Chinon supplied Agfa with the Selectronic SLR cameras and Alpa with the models 2000 and 3000. In the 1990s, Chinon developed the first digital camera, which was also sold by Kodak in a modified form. Kodak acquired a majority stake in 1997 and completely took over the company in 2004 as Kodak Digital Product Center, Japan Ltd. In the summer of 2006, Kodak parted with its own development and production of digital compact cameras. The area with the Japanese development centers in Chino and Yokohama and the production in Shanghai went to the contract manufacturer Flextronics in Singapore. The Japanese division was renamed Flextronics Digital Design Japan. Flextronics' hope of gaining additional customers with Kodak, however, was soon disappointed and so Flextronics largely parted with this area in 2009.

The company, based in Taipei, Taiwan, was founded in 2000. DXG manufactures and markets digital cameras and digital video cameras. In addition to the administration in Taiwan, DXG has subsidiaries in mainland China in Guan Tong and Hong Kong, as is now common for this industry. The focus of production has shifted from digital cameras to HD video cameras over the past few years. The intention is to produce professional digital cameras in the future, although the exact direction remains open.

The trend is similar at Chicony Electronics Co., Ltd. out. Chicony is also increasingly producing video cameras and is reducing the digital camera sector. The company was founded in 1983 as a manufacturer of PC keyboards and power supplies. In 1989, the first foreign production facility was established in Bangparkong, Thailand. Ten years later, Chicony started manufacturing digital cameras and is now mainly manufacturing in mainland China.

DigiLife Technologies Co., Ltd., founded in 2002, is one of the youngest companies in the industry. with headquarters in Taipei City and production in DongGuan Houjie. In addition to digital compact cameras, digital camcorders and media players are mainly produced today. 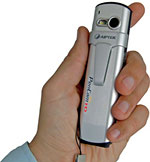 Founded in 1997, AIPTEK (Advanced Intelligent Personal Technologies) is headquartered in the Science-Based Industrial Park in HsinChu, Taiwan. The company became known with the PenCam (right) presented in 2000, which has been sold over 2.5 million times to date and is still supposed to be available. In addition to its own brand of cameras, Aiptek also supplies third parties.

In addition to the already mentioned AVY Precision Technology, there are other specialized suppliers. This includes Konica Minolta Opto, Inc, founded in 2003, which goes back to Konica Opto Corporation and the optics division of the former Minolta Co., Ltd.

Founded in 1988, Suning Mings Co., Ltd. (S.M.C.) supplies everything that camera manufacturers need in terms of small parts, from the pre-printed lens front ring to special screws and nameplates.

Kintin Optotronic Co., Ltd., founded in 1993, has specialized in optical components. specialized. The company's headquarters are located in the Nang-Gang Industry Park of Nantou, Taiwan, and a subsidiary (Dong-Guan Kintin Optotronic Co., LTD.) Is located in Dong-Guan, China. Kintin is part of the Kinko Group (Kinko Optical Co., LTD.). Originally, the company mainly produced plastic lenses for analog compact cameras and supplied, for example, Sinpo Precision with a 5.6 / 30-60 mm zoom for APS cameras, from 2002 onwards Kintin manufactured viewfinder components for Fujinon and Canon Taiwan. From 2003 the company turned to the production of lenses for mobile phones and in 2006 founded the joint venture Jinjing (Suzhou) Optical Technology Co., Ltd. with Altek. in Suzhou, China.

Another supplier is Largan Precision Co., Ltd, founded in Taichung City in the Nantun District of Taiwan in 1987. It began manufacturing aspherical plastic lenses in 1991 and shortly afterwards began series production of hybrid lenses for 35 mm compact cameras. Today, in addition to lenses for digital compact cameras, lenses for scanners, cell phone cameras and optical mice are also produced.

Compared to the camera manufacturers in Japan, the manufacturers of digital compact cameras, which are mainly active in Taiwan and mainland China, are very young companies. In the past few years, the electronic basis has clearly gained the upper hand over optical and mechanical competence, and it seems to be becoming apparent that primarily highly integrated or extremely inexpensive manufacturing, specialized supplier companies will survive in this market.