What happened in CUHK

The playwright and author Pat To Yan experiences the fighting between opposition activists and the police up close. Here he describes his impressions. 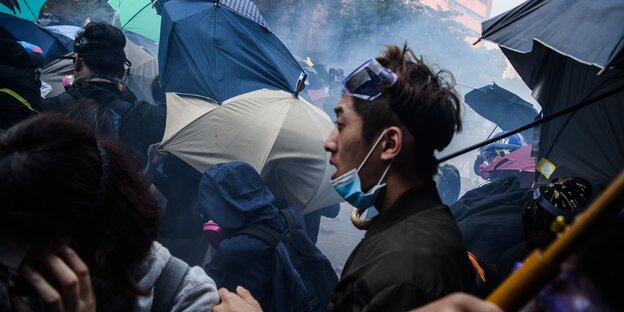 Anyone planning to visit a theater or a concert in Hong Kong on the spur of the moment doesn't know whether they will make it to the start of the performance in time. Virtually all of the venues are government owned. If the underground operator MTR ceases operations prematurely - which is currently happening frequently - all cultural events are automatically canceled.

It is strange, but even if there are other modes of transport that run according to schedule, all operators in Hong Kong always stick to the service of MTR. Unsurprisingly, the Hong Kong government is the largest shareholder in the transportation companies. The government that wants to introduce a curfew, but has just not made it through to announce it.

Artists therefore never know whether everything will go as planned. Even with the most intensive rehearsals before world premieres, they cannot turn a blind eye to what is happening outside the window. In every break, everyone immediately reaches for their smartphone and checks the latest developments.

If a general strike is announced again, the artists will also take part in the protest, in whatever form. One of them recently protested to the police in Shakespeare's diction on Twitter until he was arrested himself.

Everyday life has been seriously affected by the protests. In many neighborhoods, tear gas is sprayed and rubber bullets are fired. There are now puzzling cases of suicide that are linked to the protest movement. The police only reported that naked bodies had been found.

The victims were likely to have fallen from high-rise buildings. Strange, there were no traces of blood anywhere at the accident sites. All the dead were young. Hong Kong these days is like a living morgue.

Since 2014, Hong Kong has had an open-air gallery that wanders through the city: Lennon Wall. Post-it notes are stuck there, and citizens express their anger and their wishes for the government. This year these walls were built in all parts of the city. Useful information can be found on the Lennon Walls. Most important of all is the interpersonal effect: The Lennon Walls show you that you are not alone.

Most recently, the police focused on taking four occupied universities. The Chinese University (CUHK) was under siege for five days. It looked like a battlefield there.

Fear of death among the students

The campus is on a hill, far from the city center, there are only three exits, and it was to be feared that the safety of the students inside would be seriously endangered by the fighting. Citizens drove their cars to the CUHK campus to block the surrounding streets and enable students to escape. When I arrived on the CUHK campus, I met numerous students and citizens, the atmosphere was tense, but not resigned. They were scared to death, but were happy to have guardian angels by their side.

The police have been besieging the only occupied campus of the Polytechnic University since Sunday. An unknown number of activists have holed up there. They can no longer be supplied from outside. Several attempts to leave the site resulted in dozens being arrested on Monday, while others were pushed back and surrounded with tear gas.

In the age of the Internet and handycams, the government is apparently still hesitating to adopt a counter-insurgency scenario similar to that of Tiananmen Square in Beijing in 1989. Slowly, however, the protest in Hong Kong is painfully contained when the cameras are switched off.

Translated from the English by Julian Weber