If you want to count, you need to be rare? Donald Trump only sent his deputy to the ASEAN summit in Singapore this year. Perhaps the memories of last year are still too deep in his bones: At that time, the US President made his longest trip abroad to date around the meeting. After twelve days, he not only came back empty-handed, but also left the impression on the world stage that Washington has no strategy to counter the rise of China and the resulting global shift in power.

In addition to Mike Pence, China's Prime Minister Li Keqiang, Russian President Vladimir Putin, India's Prime Minister Narendra Modi and Japan's Prime Minister Shinzo Abe attended the summit of the ten states of the Association of Southeast Asian Nations. The states of Western Europe were not there. You signed a free trade agreement with Singapore at the Asia-Europe summit in Brussels in mid-October - the first real free trade agreement between the EU and an ASEAN country. It would be very important for the export nation Germany and the role of the EU in the world to network more closely with the ASEAN countries. The long and drawn-out agreement with the city-state - the first talks began back in 2009 - can therefore only be a beginning

ASEAN - one of the largest economic areas

The Southeast Asian community of states with 635 million inhabitants now forms a single market that is already the sixth largest economic area in the world - with annual growth of around five percent. By 2030, it aims to become the fourth largest global economy - after the USA, China and the EU. In addition to the small but economically important powerhouse Singapore, it also includes the most populous Muslim country Indonesia, Malaysia, Thailand, the Philippines, Vietnam, Myanmar, Brunei, Laos and Cambodia. Depending on the weather, the ASEAN states see China's rise to become the most important regional power sometimes as an opportunity and sometimes as a threat. Unlike Europe, Beijing seizes every opportunity - even if the wind sometimes blows the politicians in the face. This also includes pressing ahead with negotiations on a Regional Economic Partnership (RCEP). The agreement, which is heavily promoted by Beijing, is intended to unite the ASEAN countries with Japan, South Korea, China, India, Australia and New Zealand into a huge free trade bloc, which together then generates almost a third of global GDP.

RCEP was originally conceived by Beijing as a response to the Pacific Free Trade Agreement TPP, from which Washington had excluded the People's Republic. Trump saw off TPP right at the beginning of his term in office. Since then, the balance of power has shifted in Beijing's favor. To this day, he has not been able to make up for the loss of confidence that Trump triggered in Asia by terminating TPP, nor has he wanted to. On the contrary: His trade war is driving the ASEAN states more and more into the arms of Beijing. The People's Republic and the USA are the main buyers of Southeast Asian exports. If the Chinese and American economies suffer from the trade war, then the ASEAN countries also suffer. On the other hand, there are also opportunities, for example, as more and more Chinese companies are relocating their production to neighboring countries via subsidiaries in order to avoid US punitive tariffs. "We want to tackle the challenges posed by unilateralism and protectionism," said China's Deputy Foreign Minister Chen Xiaodong at the beginning of the summit. The RCEP agreement will promote regional integration and create an open, rule-based trading system. 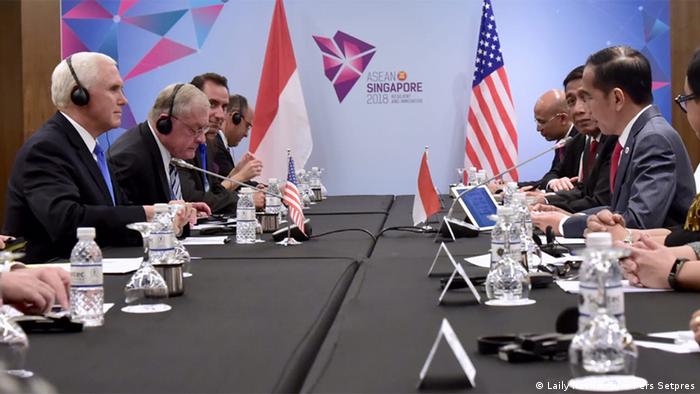 Above all, the US relies on military strength

Washington's strategy for the Indo-Pacific region, meanwhile, provides for the allies Japan and Australia to counterbalance the increasingly powerful China. China's arch-rival India is also expected to play an important role in this. It is questionable, however, whether Delhi can be made the USA's vicarious agent so easily. Especially since the USA continues to rely on a strong military presence in the Indo-Pacific region. Washington recently announced plans to invest around US $ 300 million there for military and military-political purposes. In contrast, the USA is providing only 113 million US dollars for infrastructure and connectivity projects. Compared to the immense sums that Beijing is spending on the spot for its "New Silk Road", that is negligible. The Trump administration's idea: It wants to cut a wedge between the ASEAN countries and China over the long-running territorial disputes in the South China Sea. That will probably not work.

In any case, Brussels would be well advised to expand its partnerships in Asia and to unite them in a comprehensive EU-Asean agreement in the long term. Europe still has technologies and products to offer that are sought after in Asia. The Europeans would still be welcomed with open arms. Because nobody in Asia wants to put everything on the China map. But for that to happen, Brussels would have to jump over its shadow and be ready to compromise. In Thailand, for example, the free trade agreement is on hold because the EU has so far not wanted to negotiate with the military government. There are now considerations to reconsider this attitude now that Beijing and Bangkok are getting closer and closer. In Asia, the EU must switch to realpolitik even more than before.

Our columnist Frank Sieren has lived in Beijing for over 20 years.