Fascination with the inexplicable: football as a religion

When people make a pilgrimage to stadiums, pay homage to talent of the century and quarrel with the “god of football” after their team's defeats, then it's the World Cup. At no other time is it clearer how close sport and religion are.

Round of 16, Argentina versus Switzerland. It's a bend and break, the 1-0 for the South Americans only after 118 minutes. Shortly before the end, the Swiss still have the chance to save themselves in the penalty shoot-out. Blerim Dzemaili gets a header right in front of the goal, but the ball bounces off the bar. Seconds later, the Argentines are in the quarter-finals. The “Pillar of God” (“El Palo de Dios”) saved them, writes the newspaper “Ole” from Sao Paulo the next day. There is also talk of an "intervention" by the Argentine Pope - a photo montage is circulating on the Internet in which he fends off the ball. 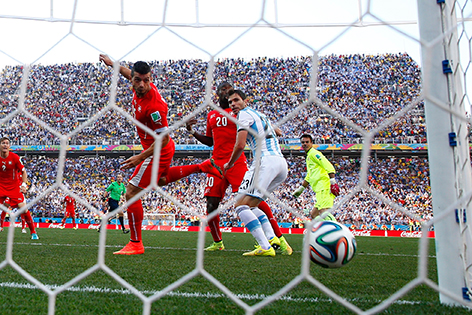 Blerim Dzemaili heads to the "post of God" against Argentina

It's not the first time: Time and again, tight decisions in football are commented on with references to the supernatural. The whole of Germany still fondly remembers the victory at the 1954 World Cup against the highly favored Hungarians, the “miracle of Bern”. And when Diego Maradona scored the decisive goal in the quarter-finals of the 1986 World Cup against England after a handball, he himself spoke of the “hand of God” after the game - probably the model for the headline from Sao Paulo after the Argentina’s round of 16 victory.

Many of the players at the current World Cup are deeply religious, even if they have not been allowed to show it on the pitch since 2009. Back then, just before the World Cup in South Africa, the World Football Association (FIFA) banned religious beliefs in the exhilaration after a goal. Brazilian footballers in particular had repeatedly attracted attention because they wore shirts with Christian messages under their jerseys and displayed them after scoring a goal. What was a commitment for some, others might find provocation, so the official statement of the FIFA at the time.

Nevertheless: Religious symbolism is still almost ubiquitous. Many players cross each other before and after the game, and even during the game, looking at the sky or pointing upward forefingers are clear gestures that can hardly be covered by a ban. 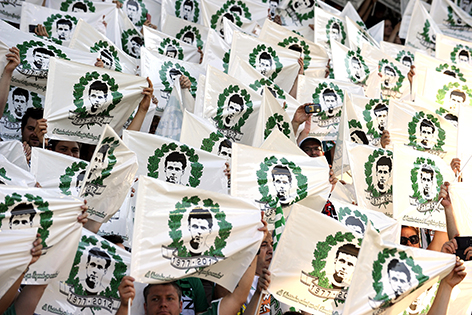 The game itself can also be understood as a ritual with religious features. There are clear rules and the referee is an actor who watches over these rules. For Leopold Neuhold, head of the Institute for Ethics and Social Studies at the University of Graz and who has been dealing with the social dimensions of football for years, the referee can be compared to a religious leader. "He makes factual decisions that are not to be questioned - like the Pope," Neuhold told religion.ORF.at

The fans in focus

The religious phenomenology of football does not end on the “sacred lawn”. From a religious studies point of view, the fans are even more exciting than what is happening on the pitch, says Hans Gerald Hödl from the Institute for Religious Studies at the University of Vienna. “The players are actors in a ritual event, but the fans are those for whose lives this ritual event is significant. Without the participation of the fans, without the importance of football in their lives, there would be no 'community'. "

And that's not only the case during the World Cup. The fans of Rapid Vienna did not just go to the stadium in recent years, they “made a pilgrimage” to “St. Hanappi ". The last game in the Hanappi Stadium last Sunday was accordingly staged as a big farewell party, which once again underlined the importance of the quasi-sacred place.

Common choreographies and hymns shape the public appearances of many fan groups. In their rituals they obviously use religious models - the fans of the German Bundesliga club Schalke 04 pray "Schalke Unser" before every game. But do these phenomena actually fulfill similar functions as religious ones? Can a match be compared to a church service? A soccer battle song with ecstatic drum music? The community of football fans with a church?

On the German website Sozialwissenschaftliche Fußballforschung (Social Science Football Research), Mathias and Mike S. Schäfer examined the functions of football for fans in 2009 and compared them with those attributed to religion. Your result: some functions, such as the community foundation and the structuring of everyday life, match. The function of religion for the individual, to provide support in difficult situations and to provide explanations for the inexplicable, can only be replaced by football in rare cases. 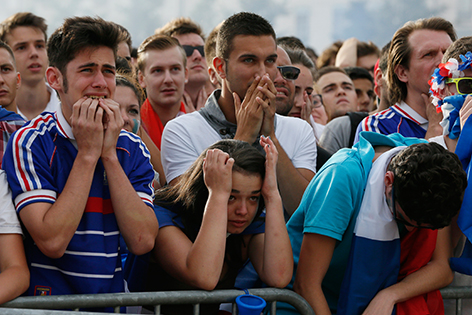 Football as a contingency experience: French fans after the quarter-finals against Germany

“In any case, football fanatics share the classic function of religions, which was already described by Emile Durkheim, namely to establish group ties,” Hödl told religion.ORF.at. There are also people for whom football is a meaningful system. "However, one will wonder to what extent this system of meaningfulness answers the questions that are classically answered by religions, such as the post-death fate of humans or the coping with negative experiences of contingency such as catastrophes, illness or untimely death."

For Neuhold, football still has something to do with coping with such experiences. As a rule, football fans cannot draw the strength from sport to cope with life's defeats. However, there are also disappointments to be overcome within sport. How people deal with it is the most interesting question for him in relation to the religious dimensions of football.

At the same time, this aspect - together with its worldwide popularity - is decisive for the fact that religion is spoken of more often in football than in other sports. "A single goal can be decisive and at the same time terribly unfair," says Neuhold. Due to the small number of decisive scenes, football is more unpredictable than other sports, and it is precisely this characteristic that contributes enormously to both fascination and confrontation with the inexplicable and unjust.

The inexplicable, supernatural or transcendent is also at the center of religion, especially when it is defined in terms of content rather than functions. Religion is then not described as a phenomenon that fulfills one or the other task for humans, but - as Hödl says - as "intercourse with culturally postulated superhuman beings".

This can also be determined in relation to football, because "this also includes ancestors or deified people, such as the heroes in ancient Greece, the Catholic saints in the 'popular religion' or even some West African deities." one could sometimes speak of a "deification process".

Football as a "contrast film"

So whether or not football can be seen as a religion is inevitably related to what one actually understands by religion. For Hödl, the question of the football religion is therefore “paradigmatic for the problem of a religion that is too narrow or too broad”. Precisely because there are many religion-like phenomena in and around football, it is “a kind of contrast film against which religious scholars can work out what is specifically religious in their research subject”.

Football is therefore not only an interesting subject of research for religious studies, but also an aid to clarify where the limits of this term should be drawn. Accordingly, Hödl's answer to the question of whether football is a religion is nuanced but unambiguous: “Football is a cultural subsystem that has religious aspects and may fulfill the function of religion for certain individuals, but not actually as a 'religion 'can be viewed. "

Neuhold sees it similarly, but adds an ethical component. He thinks that football should not be or should not become a religion. “Football is irrelevant war,” he says. However, religious fervor would turn the supporter of the opposing team into the enemy and the irrelevant into the relevant war. Violent clashes between fans of different teams have something of a "religious war" for him. And that should be avoided.