Is Slovenia interesting to visit

These are the most popular and beautiful sights in Slovenia

The sunny Alps, the blue Mediterranean, more than 5000 years of culture and beautiful Lipizzaner horses - the small country Slovenia has so much to offer. With its varied sights and Mediterranean climate, Slovenia is an ideal holiday destination. If you want to explore all that Slovenia has to offer, you have landed on the right post. We'll introduce you to the most beautiful sights in Slovenia and give you tips on what you shouldn't miss there.

The castle in the Slovenian capital has been enthroned since 900 years on a hill above the city. Even then it was the seat of the Spanheim sovereigns. The castle got its current appearance after an earthquake in 1511 and at the beginning of the 17th century. Our tip: one breathtaking view over the city you get when you climb the observation tower or the castle wall. 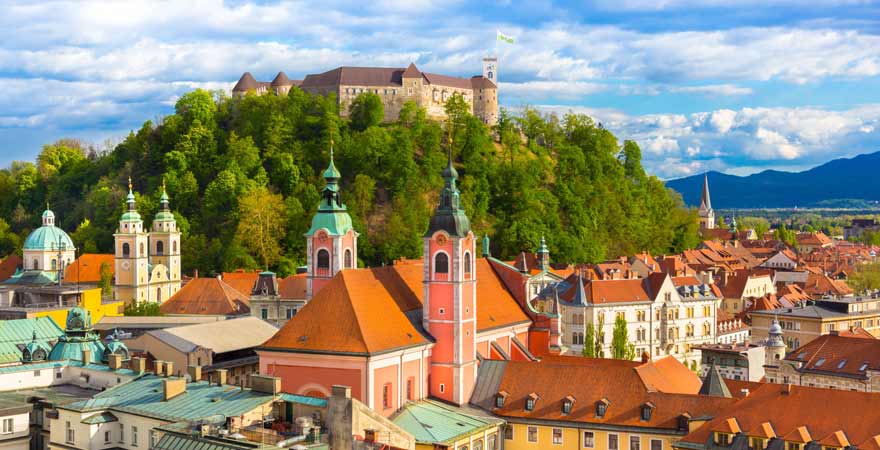 In the Castle rooms you can also visit a lot of interesting things - including the doll museum or the museum exhibition of Slovenian history. For everyone for whom that is not enough: The castle complex also offers various cultural events, events for the whole family or dance evenings.

You can either reach the castle on foot or with the castle cable car, which leaves in the middle of the city center behind the market. The journey only takes a minute.

Prešeren Square is located in the New Town at the foot of the Triple Bridge and is one of the most important sights in Slovenia. The result is the place in 17th century, it owes its name to the monument of the Slovenian national poet France Prešeren. 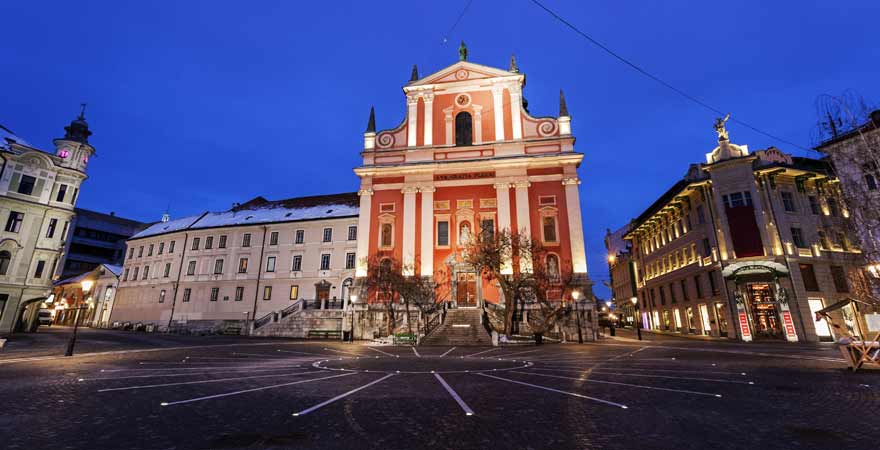 Prešeren Square is also a very popular meeting place for young and old, for locals and tourists. Around the square you will find nice cafes, restaurants and small boutiques. Other sights on Prešeren Square are the Franciscan Church, the Secessionist-Hauptmann-Haus, and the Urbanc House.

The Predjama cave castle is only about 15 minutes by car from Postojna, is a very well-known photo motif and is one of the popular tourist attractions in Slovenia. This really quirky castle was built in the 12th century built into a rock face and is the largest cave castle in the world. If you want to visit the castle, you can take a free shuttle bus from Postojna to the castle in the summer months.

There is a small parking lot for cars right by the castle. Armed with an audio guide, you set off into the fairytale world of castle women and knights.

Good to know: While the castle can be visited every day, the cave under the castle is only open from June to August due to the hibernation of bats.

4. The Praetor's Palace in Koper

The Praetor's Palace is an impressive building on the central square of the city of Koper, which is located in the 13th Century was created, but was destroyed by fire. The palace got its current appearance in the middle of the 15th century, the last renovation took place in 2001. Today the palace is best known for its crenellated crown.

The Praetor's Palace, once the seat of the city rulers and a special sight in Slovenia, convinces with its history and an elegant look. The great hall of the Praetor's Palace is mainly used for celebrations and official occasions.

You can visit the tourist information center on the ground floor. The second oldest pharmacy from the late 18th century is also located here, and a wedding hall is located on the first floor.

5. The coastal city of Piran

Piran is one of the most beautiful coastal cities on the Slovenian Adriatic. You can expect Venetian flair and a wonderfully clear sea. Ljubljana, the capital of Slovenia, is around 120 km away and the Croatian border is only 15 km away.

The history of the city goes back to Roman times. You will feel right at home in the narrow streets with their pastel-colored, Venetian house facades. 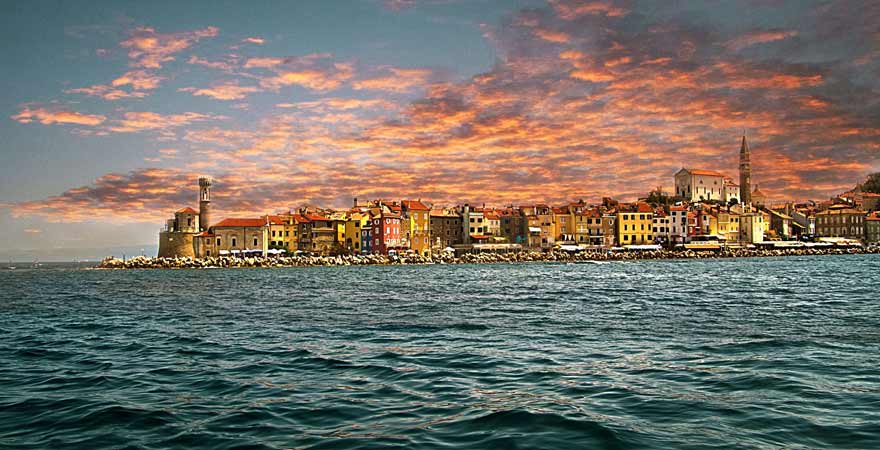 There are also many beautiful places, ornate churches and interesting museums to discover. As a beach holidaymaker you can expect numerous beautiful beaches and a really wide range of leisure activities. Enjoy your evening in one of the many beautiful restaurants and taverns or stroll along the small port of Piran.

The Stankt Georgs Church cannot be overlooked, as it towers over the city on the northern side of Piran. Probably the Stankt Georgs church was built in Erected 12th centuryHowever, there is no reliable data on this. The church was expanded to its present size in the 14th century. The church tower with a height of 47.2 meters was completed in 1608 and is a smaller one Copy of Mark's Tower in Venice. 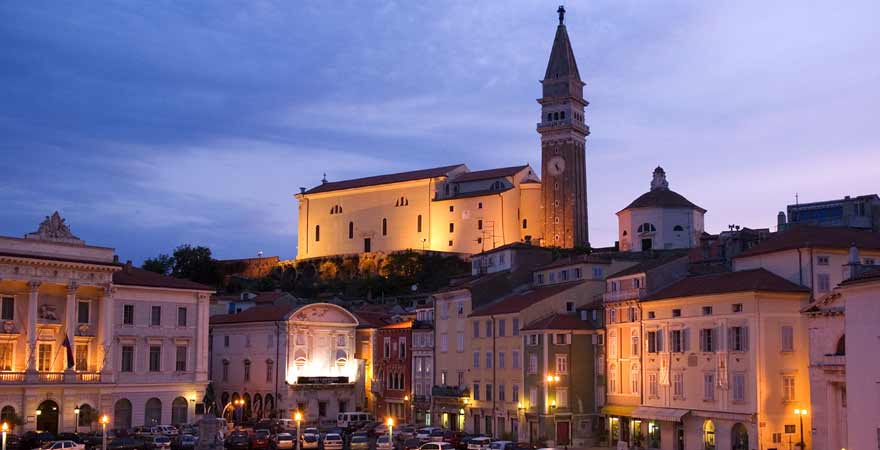 If you climb the 146 steps of the bell tower, you can see the beautiful view of the city and enjoy the surroundings. In the sacristy on the ground floor there are various objects that can be viewed. The cathedral organ, the two statues of St. George and the decorated hanging wooden ceiling.

If you visit the place Bled, you should visit the castle "Blejski Grad" do not miss. It is located on a hill near the center of the village. You can reach the castle with a 15-minute walk or by car. There is a lot to discover at the castle. An exhibition about the historical development of Bled or a castle wine cellar, in which you can even fill a bottle of red wine yourself and put a seal on it. 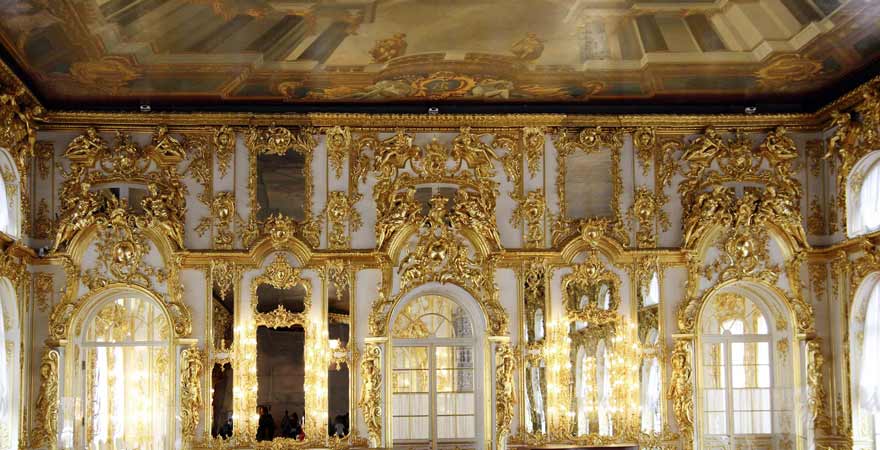 You can also do your own thing in the castle printing shop and the blacksmith offers many beautiful metal souvenirs. At the end of an eventful tour, you can enjoy a wonderful view of the from the castle café Lake Bled enjoy. It is worth visiting the castle early in the morning before the first coaches arrive.

Lake Bled is a real gem with its many viewpoints and the great mountain scenery on the horizon. It is definitely worth exploring Lake Bled on a walk. The Circular hiking trail is approximately 6 kilometers long and should be easy to tackle for anyone. You can plan 1.5 to 2 hours for the leisurely circumnavigation. 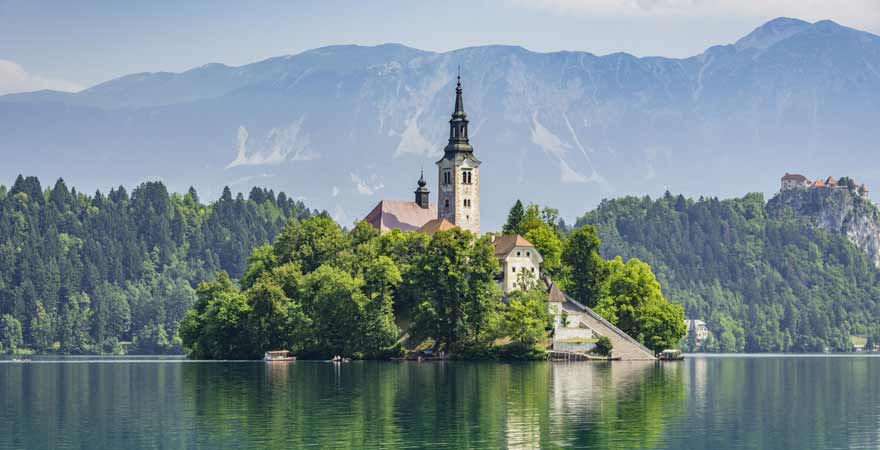 In the middle of the lake is the tiny and only Slovenian island (“Blejski Otok”) with its distinctive church Assumption Day, which is one of the most famous photo opportunities in Slovenia. You can either reach the small island with a traditional wooden boat (pletnas), which is mostly driven to the island by young men, or you can rent a rowing boat and row to the island on your own.

Not far from Bled there is another highlight to discover, the Vintgar Gorge. Here the Radovna River has dug a spectacular gorge into the rock. over Wooden walkways you can hike through the gorge and marvel at the colors of the clear water, which alternates between turquoise blue and emerald green, a really great sight! If you want to go the whole way, you have to count on about 50 minutes. 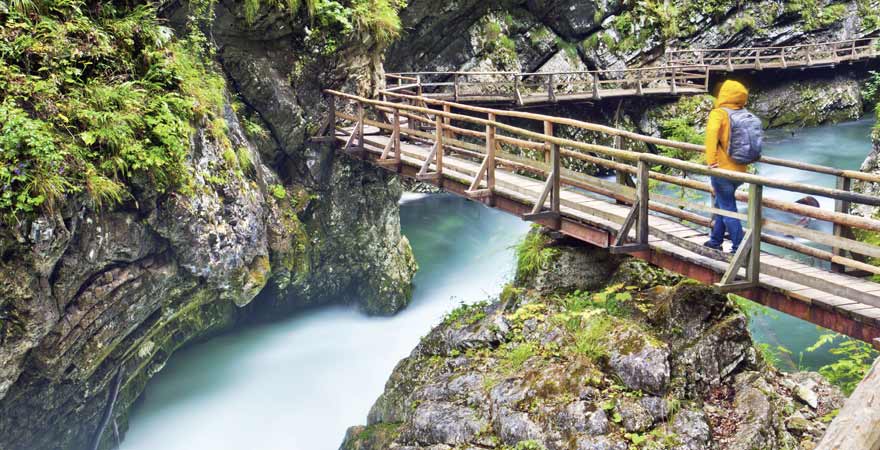 After a good 1.6 km you have reached the end of the gorge, where the Sum waterfall expected, which falls 13 meters down here. It is the highest waterfall in Slovenia. The path through the gorge is of course very popular. It is therefore advisable to set off early. Preferably shortly after the gorge opens at around 8 a.m.

Postojna is the one second largest stalactite cave in the world and one of the many tourist attractions in Slovenia. You can find the cave between the capital Ljubljana and the coast of Slovenia. This gigantic cave with its magnificent stalactite sculptures and a varied fauna is located in the rather inconspicuous town of Postojna. Visiting the heights is really a special experience. With the so-called Grotto Railway you drive about 10 minutes into the cave.

Already on the drive you can see how unbelievably large the cave system of the grotto is. You will discover bizarre stalagmites and stalagmites in the countless halls. You then cover part of the tour on foot, where you can marvel at the most curious stalactite formations. Since the temperature in the cave is always around 10 degrees Celsius, you'd better pack a jacket.

On the north side of the Triglav National Park is the Vršic Pass, the highest road pass in Slovenia. It leads over the Vršic from Kranjska Gora to the Trenta valley. Numerous switchbacks and 51 switchbacks lead over 10 kilometers up to 1611 m. The mountain road is of course very popular with motorcyclists and cyclists. The Vršic Pass is also a perfect starting point for hikers and mountaineers.

One of the sights on the pass is the Russian chapelwhich is located about 3 kilometers east of the Vršic mountain pass. It was built in 1916 to commemorate the Russian soldiers who died in a crash. Many beautiful vantage points invite you to take a photo stop or take a short break. But you should always pay attention to the many cows and sheep that graze on the Vršic Pass and like to take a walk across the road.

The Lipica Stud is located in Sežana in southwest Slovenia, very close to the Italian border. The stud was founded in 1580 by Archduke Karl II. In addition, 24 broodmares and 6 breeding stallions were bought in 1581. The Lipizzaner originated from Arab and Andalusian stallions that were crossed with European mares. Incidentally, Lipizzaners are not born white, but are dark brown to black in color at birth.

You can visit the stud at set times. You can visit the magnificent stables of the Lipizzaner horses, learn something about the history of the stud and, of course, watch the wonderful horses during training or dressage demonstrations. If you dare, you can take a ride on one of the beautiful horses yourself. 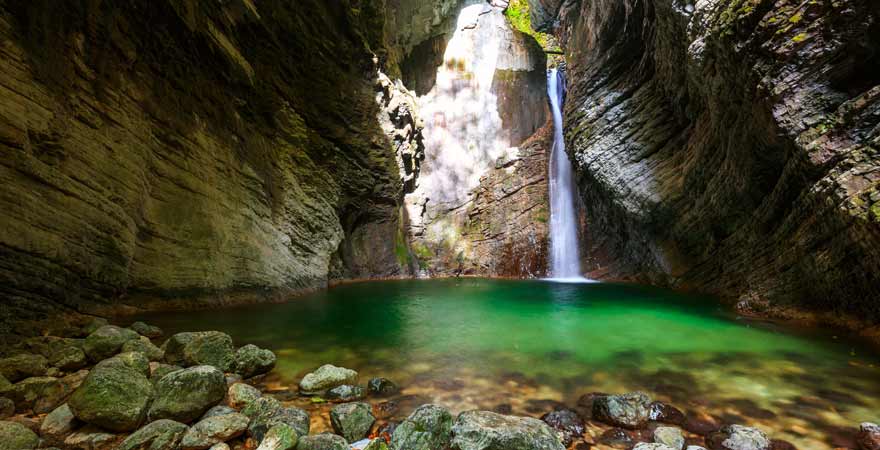 A Hike from the city of Kobarid to the large Kozjak waterfall takes about 1 hour and takes you through impressive nature, past meadows and forests. Sturdy shoes are mandatory here, as the path can be quite slippery in some places.

Crystal clear lakes, green valleys, babbling brooks, unique views and a diverse flora and fauna await you in the Triglav National Park, the largest protected area and only national park in Slovenia. The national park, which is one of the oldest in Europe, extends over the entire area of ​​the Slovenian part of the Julian Alps and covers a total of 838 km². The national park is named after the highest mountain in Slovenia, the 2,864 meter high Triglav. For the Slovenes it is a kind of holy mountain. 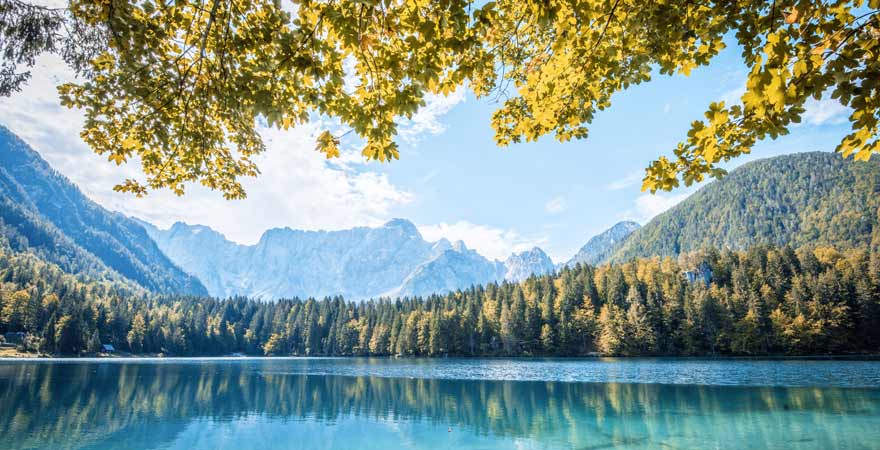 The nature park with its variety of plants and animals is of course a paradise for nature lovers. You might discover it on a hike Ibex, chamois, deer or brown bear in the depths of the woods. The Triglav National Park is one of the special sights in Slovenia and is a special highlight for adventurers, hikers, cyclists and whitewater enthusiasts.

In the southeast of the Triglav National Park is the largest lake in the country Slovenia, the Wocheiner See. It belongs to the municipality of Bohinj and is a popular summer destination for bathers. The crystal clear water warms up to 22 ° C in the summer months. Active vacationers and water sports enthusiasts can also be found here who want to explore the lake and its surrounding rivers by canoe or kayak. 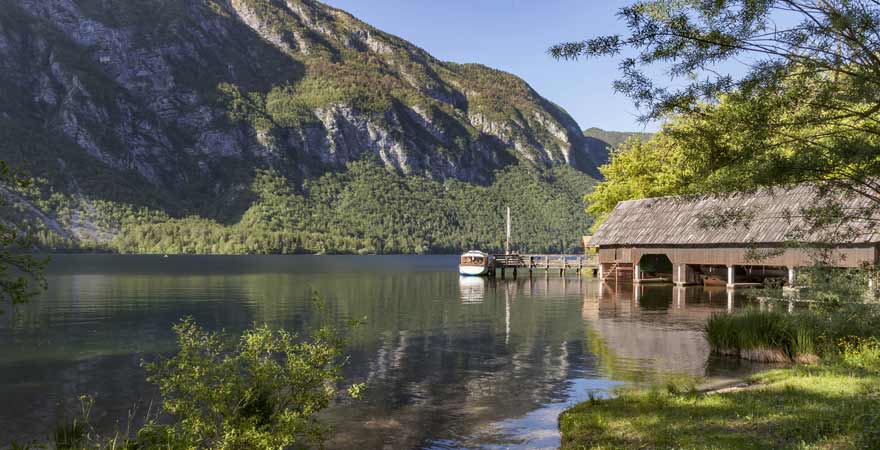 You can also explore the lake and its landscape on foot or by bike. Popular destinations at the Wocheiner See are the source of the Sava Bohinjka and the Savica waterfall. The waterfall first falls 38 m over steps and then falls another 51 m. The Savica then divides into two waterfalls in the lower part of the waterfall.