There are street parades in Taipei, Taiwan

(Minghui.org) The parade of the Environmental Art Festival 2020 of Tamsui County started on September 27, 2020 on the Old Street Square of New Taipei. The annual parade showcases the district's rich culture and unique arts scene. This is the fourth straight year that the Tian Guo Marching Band was invited to take part in the parade. In this year overshadowed by the coronavirus pandemic, the New Taipei government decided to hold the event to bring people back in touch and give them hope in a time of crisis.

New Taipei Mayor Hou Yu-ih and members of the participating art groups opened the event at 3:00 p.m. despite a heavy downpour. This was followed by the street parade, which consisted of around 40 groups and over 1,000 participants. The 130 members of the Tian Guo Marching Band in their blue and white traditional Chinese costumes attracted a lot of attention. People stopped to take photos or videotape their performance. 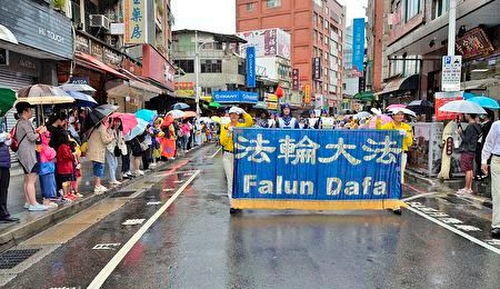 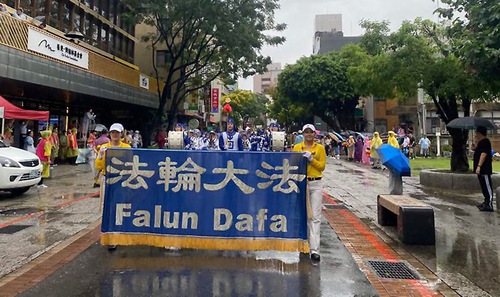 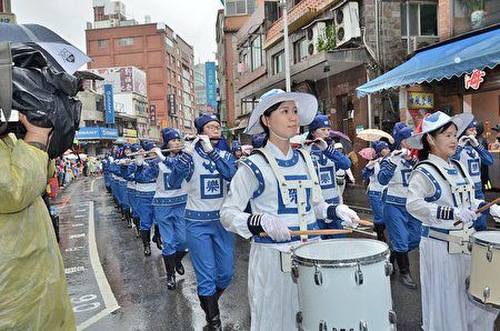 The Tian Guo Marching Band, made up of Falun Dafa practitioners, plays in the parade of the Environmental Art Festival of, despite a downpourTamsui.

The Tian Guo Marching Band played a popular Taiwanese folk song as well as several songs that expressed the beauty of Falun Dafa.

Pretty girls dressed as apsaras in traditional Chinese costumes ran behind the chapel. They distributed lotus flowers and information about this spiritual cultivation path, conveying the beauty of Falun Dafa in their own way. 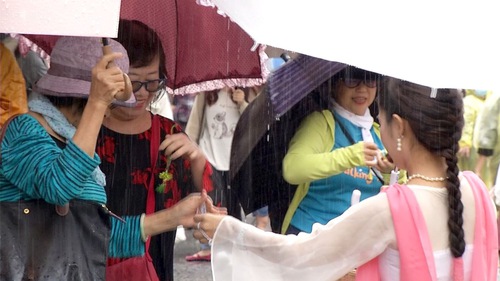 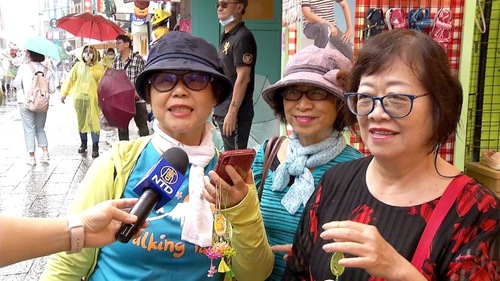 Many tourists ask for the lotus flower souvenirs with messages about Falun Dafa. They thank practitioners for this beautiful gift.

"We received a beautiful gift - a lotus flower that said, 'Falun Dafa is good,'" one local exclaimed enthusiastically.

One man said, “We happened to be walking in that direction when we got the big one Tian Guo Marching Band saw. Even though it was raining, we didn't want to leave. We stayed to enjoy the performance. "

“The courage of Tian Guo Marching Band is commendable; they appear in spite of the bad weather, ”said one spectator appreciatively. Her friend also praised the band: “This band is really admirable. She is one of the largest groups in the parade today. Your costumes are beautiful. They all look so energetic. "

Li from Kaohsiung, who plays the trumpet in the marching band, said, “This is the third time I have attended this festival. I am very happy to see the audience again. I got there by bus from Kaohsiung at five in the morning today. Even though it was raining all the time in Tamsui, we still did our best. At the beginning of the year, many outdoor events were canceled due to the coronavirus. It is very important for me to be able to attend this year's festival and to convey through the music how wonderful Falun Dafa is. Because the music we play is pure and peaceful, I believe it will give people hope in such troubled times. "

At the end of the festival, the Tian Guo Marching Band will play at the “Golden Anchor” in Tamsui.

The Tian Guo Marching Band occurred after the parade on Golden anchor from Tamsui and put the perfect end to the day's events.

All articles, graphics, or other content posted on Minghui.org are the copyright of Minghui.org. When reprinting and redistributing the content for non-commercial purposes, please include the original title and URL link, and make it clear that it is from Minghui.org.