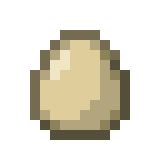 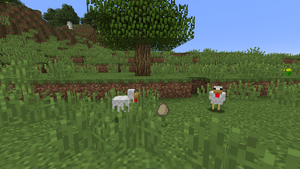 A chicken living in the wild has laid an egg

The egg is a material that does not belong to food because it cannot be eaten. But you can prepare food from it.

A chicken lays a single egg every five to ten minutes. Therefore, every now and then you can find them just lying around in the world.

With a funnel and chickens caught over it, you can easily automate the extraction of eggs.

Eggs can be found in village chests.

The egg is an item in the inventory. As soon as it is thrown, it becomes a moving object. It bursts on landing.

Hits with eggs do no damage, although a creature hit will flash red for a moment upon impact, as does damage taken. It is simply pushed back. A hit with an egg makes neutral creatures aggressive because they count it as an attack. If you throw an egg onto a painting or a frame, these are dismantled, or the content of a frame is dropped.

Eggs can be thrown by throwers.