How fast are wages rising in China

China - the end of the low-wage country?

German workers can only dream of such wage increases: On January 1, the Beijing city government raised the minimum wage by 8.6 percent. On February 1, the Shenzhen Special Economic Zone in southern China will follow the example of the capital. The minimum wage for simple work there has been raised to 1,500 yuan per month, which is around 185 euros. 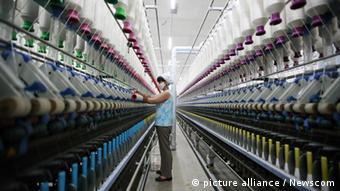 Trained workers are in great demand in China

Wages in China are rising rapidly. According to statistics from the Ministry of Labor and Social Security, wages rose nationwide by a good 20 percent last year. The main reason for this development is the increasing labor shortage in China, says the Chinese labor market expert Liu Kaiming from the Institute of Contemporary Observation in Shenzhen. "You can see that since 2004, people born after 1980 have made up the main workforce. But because of birth planning, the workforce is shrinking."

The labor shortage is particularly noticeable in the low-wage sector. In the textile industry but also in the toy industry, more and more companies are moving to Vietnam, Cambodia or Bangladesh because of rising wages. China as the number one low-wage country - those days are apparently over. The Chinese leadership is actively promoting wage increases. She wants to avoid unrest and increase the pressure to introduce higher-quality technologies.

"Made in America - again"

Even the long exodus of American industrial companies to China has come to an end. The Boston Consulting Group released a report last December entitled "Made in America, again". In it, the authors write that US industrial companies are increasingly producing again in North America for the domestic market. The main reason for this is that productivity growth in China cannot compensate for the sharp rise in wages. In the USA, however, wages are falling; at the same time productivity increases there. Added to this is the appreciation of the Chinese yuan and the weak dollar.

Hal Sirkin, one of the authors of the study, expects that by 2015 the production costs in China for a large part of the products will be only 10 percent lower than in the USA. "If you add the cost of transportation, the risk of product piracy, the three months it takes to ship the products, and the fact that they are 8,000 to 10,000 kilometers from the customer, those 10 percent play a role no longer matter. " Then it doesn't matter whether you are producing in China or in the USA.

A trend like the one in the USA cannot be observed in German industry, says Alexandra Waldmann from the Asia-Pacific Committee of the Federation of German Industries. On the contrary: the investment sums are increasing. German companies in China mainly produce in the high-tech sector and accordingly have to pay high salaries anyway. For these companies, the qualification of the employees plays a bigger role than the question of the wage level, says Waldmann. 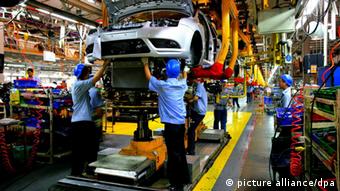 In addition, German companies in China are for the most part medium-sized companies that make long-term location decisions, says Waldmann. If nothing else, because the training and further education of employees is a lengthy process. "Once you have trained qualified people who can manufacture high-tech products, it is not so easy to leave and build up somewhere else," Waldmann explains to DW-WORLD.DE.

But wage increases in China can have positive effects for foreign companies. Rising wages put purchasing power in the pockets of Chinese consumers and make the Chinese market even more interesting. The former producers become consumers.

Therefore, a return of US industrial companies to their home countries does not necessarily mean that factories in China are closed, according to Hal Sirkin of the Boston Consulting Group. The US factories in China would serve the Asian market in the future. The USA, on the other hand, will increasingly become a production location for the North American market again in the future, the analyst predicts.