Not just free, but free: Eleven contact points for pictures on the net [Update] 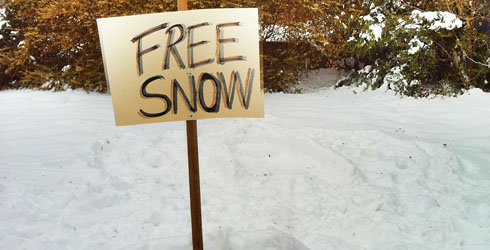 Photos and other images are available free of charge on many pages. But there are some differences between “free”, “license free”, “public domain” and “freely licensed”. Eleven recommended sources for free images on the net. [Update: October 12, 2019]

Everyone knows what is free, but when is content actually “free”? Both terms do not necessarily mean the same thing. If images are under free licenses, they are usually free, but not always. However, free content is not automatically “free” - for example because it is provided with restrictive terms of use. Usually one of the following three models is hidden behind free photo offers:

The term "license-free" is a skewed translation of the English term royalty-free, which means something like: free of royalties or other usage fees. Such photos are available free of charge from many platforms. Strictly speaking, you usually still conclude a license agreement when you use the images - for example via the website's terms of use, which usually specify further requirements.

In addition, "license-free" can also refer to images that are sold by classic photo agencies for a fee, but which do not restrict how the images can be used after purchase. These images can be used indefinitely or multiple times, for example. If websites advertise “royalty-free” images, it is always advisable to take a closer look at the terms of use or license.

With the term "public domain" or public domain those works are designated for which there are no copyrights. There can be different reasons for this. Often the rights have expired: In the case of photographic works, the term of protection in Germany and other countries ends 70 years after the author's death. It is shorter for simple snapshots in which there is no creative effort. Then they are protected as a “photo” for 50 years from the date of publication. Official works such as legal texts are also excluded from copyright protection, which is rather rare for photos.

If you still have rights to photos, you can still use “Creative Commons Zero” (CC0, also public domain dedication) can be released for use without further conditions. As a result, they can be used like works in the public domain. Even if there is no obligation to do so, it can be advisable to mark content in the public domain and content with CC0 approval separately when used.

Free licenses allow works to continue to be used under certain conditions that the author or rights holder determines himself. The best known are the Creative Commons licenses, which consist of standardized license modules. They allow the content to be used without being asked if certain conditions are observed.

There are different views as to which variants of the Creative Commons licenses should really be considered "free". According to a common definition of “free cultural works”, you should be able to edit them and use them commercially. The term "Open Content" encompasses the more permissive and the more restrictive license variants.

In this article, iRights.info provides ten contact points for public domain images and pictures below Creative Commons Licenses in front. If you want even more: The contributors to Wikipedia have compiled more than a hundred sources.

With a good 39 million image files, Wikimedia Commons is one of the most important points of contact for free images. The quality is mixed with the variety of content, but if you are looking, you will usually find it. Through cooperation with other institutions, some particularly interesting collections are available on Wikimedia Commons - for example from the Federal Archives, the German Photo Library or the Konrad Adenauer Foundation.

Most of the content uploaded to Wikimedia Commons is licensed under Creative Commons or in the public domain. The description page of the respective file shows this in detail. The licensehinweisgenerator.de page helps with further use of the content: If the link to a Wikipedia or image page is inserted there, the tool displays the necessary information.

At Flickr, the advanced search allows you to limit the results to freely usable images. About two thirds of the pictures published on Flickr under Creative Commons licenses are marked with the component “no commercial use” (non-commercial, NC). What is meant by this is not always clear. It is advisable to only use content with this condition if it is without a doubt non-commercial use.

Flickr also has its own "Commons" section with a search function. Photos and other digitized content are collected there, to which there are no longer any copyrights. They come from archives, museums and other organizations that participate in the program - such as the British Library, the Library of Congress or NASA.

Not every document and every invitation has to be provided with cliparts, but the Openclipart platform offers numerous well-designed illustrations for further use among the more than 130,000 images. The images are available as vector, image or PDF files; all illustrations have been given CC-Zero approval by the designers. Anyone can continue to use it in any way without further conditions.

The Internet Archive, founded by Brewster Kahle, is a digital universal library that not only collects books, videos and computer games, but also digitized illustrations and photos. When it comes to licenses, it is worth taking a closer look at the respective detail pages, since, in addition to works in the public domain and freely licensed works, there is also content that cannot be easily used in European countries at least.

In order to be able to use the advanced search in a meaningful way, however, a basic course in information science is recommended, because relatively complex search queries can be necessary. Nevertheless, some discoveries can be made on the Internet archive: digital editions of “Little Memo” comics since 1905, for example, or illustrations of sea monsters of all kinds.

Many of the library's works and collections are also available in digitized form via the Library of Congress's catalog for prints and photographs. A large part of it, but not all of its content, is in the public domain, and in some cases the legal situation is not entirely clear - a look at the detailed descriptions and the information from the Library of Congress provides information.

There are currently around 1.2 million images on Pixabay. The platform from Ulm sees itself as a free, but high-quality alternative to stock photo providers, whose typical aesthetics are followed by many of the images published there. The individual images can be used without any further conditions; In addition, the Shutterstock payment service displays its own photos as advertising. Further information can be found in the terms of use.

Update August 2019: We can no longer unreservedly recommend the use of Pixabay, as the platform has now changed its license and the images are no longer published under CC Zero. More information: Pixabay is switching from Creative Commons approval to a self-made license

Similar to Flickr, 500px from Canada sees itself as a photo community and offers photographers, among other things, sales functions for their pictures. The search results can be restricted to different Creative Commons licenses or the CC0 approval. A good 850,000 images have been approved accordingly. These are significantly less than with Flickr, but they are often well selected.

The New York Metropolitan Museum is the largest art museum in the United States, and the Met has digitized part of its collection and made it available online. At the beginning of 2017, the museum started an open access program and largely abolished previously applicable restrictions on further use. At present, a good 210,000 of almost 450,000 entries in the online catalog are marked with the CC0 approval.

The Google image search was streamlined in September 2020 and renewed in cooperation with image agencies: It now offers an easy-to-use license filter with which, for example, Creative Commons-licensed image material can be displayed in a targeted manner. The practical thing about the new feature: It displays the license information and also provides information on how to obtain permission to use an image and what to watch out for. The filter can be accessed via the “Advanced search” setting, which is also available in the mobile view. 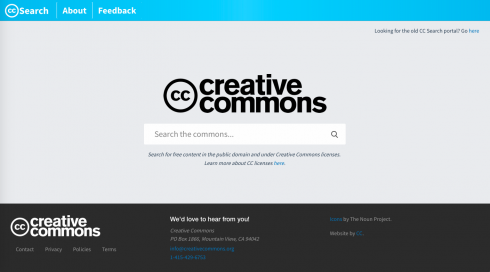 In June 2019, Creative Commons presented a completely renewed version of the search service "CC Search". It enables a targeted search and direct filtering of CC-licensed works on the web - whereby the CC search engine is initially limited to digital photos and images from around 20 different providers, such as Flickr, Rawpixel, Deviant Art and several museums from all over the world. Nevertheless, according to Creative Commons, over 300 million CC-licensed and released works should be searchable in these sources. CC Search presents the search results directly with previews; they can be filtered according to license type, source and other criteria. In addition, the files can be downloaded immediately with license information. (See also our article on how the new CC Search works.)

In addition to the large platforms, smaller sites such as Publicdomainarchive.com offer a clear but modern selection of photos. The Visualhunt service offers a cross-platform search for free images. Numerous photographers also maintain their own pages and blogs with free images, such as MMT by Jeffrey Bets or “Cupcake” by Nilsson Lee (both with CC0 approval). Every day, the Magdeleine site presents a selected photo under CC0 approval or one of the CC licenses. Foodiesfeed collects freely usable food photos, according to its own information there are around 800 images on the site. Photos under CC0 approval are well suited for use in software, apps or themes, as their use is not restricted by additional conditions.

Last but not least: At all of the contact points mentioned here, there is no one hundred percent guarantee that the photos will always be used as intended. License information can be incorrect, for example, because users do not have the necessary rights to issue a free license. Occasionally such incorrectly identified content appears on some platforms.

If the licensor does not have the necessary rights, the powers from the Creative Commons licenses also run out of steam. This is not a peculiarity of free licenses, because copyright law does not recognize a “good faith acquisition” of usage rights. The right to one's own image, which is not covered by free licenses, can also come into play if it should become apparent, for example, that a person depicted did not agree to the recording.

This article first appeared on March 27, 2014. It was updated in September 2017 to reflect new free content websites and services. Comments can refer to an old version of the post.
Update October 2018: We have deleted some comments that refer to pages that are no longer online. Update August / September 2019: We changed the paragraph to Pixabay and added a new paragraph to CC Search. Update October 2020: The paragraph on Google image search has been renewed.

On the topic at iRights.info

What do you think?