Have houses basements in California

Real estate in the USA

Solid stone walls are hardly known, just as solid ceilings or partition walls, e.g. in terraced houses. ( Townhouses called). Even houses with three or four storeys are built and built in post-and-beam construction Staples, that is the somewhat more solid version of the paper clip, held together. This is not a joke and one of the reasons why a hurricane blows the roof off many houses or causes them to collapse completely.

Construction? Anything but massive!

The roofs are mostly only stapled with roofing felt. The noble variant are the so-called "shingels", wooden shingles. The wrong pillars are often used in more expensive houses. Bricks glued to the facade are also very popular. This is supposed to pretend solidity, but it is not particularly stable. Even the outer walls are just “plywood”, a somewhat thicker particle board. Likewise the false ceilings and the roof. For cost reasons, the side walls and the rear wall of the building are often covered with "siding". These are long, thin cladding elements made of either metal (especially aluminum), plastic or wood.

There is hardly any or only a rudimentary insulation, and “drywall” is then stapled from the inside. Drywall is known in Germany as plasterboard. In this way, a house can be built in a few weeks, even if only two or three workers build it. Drywall can then be tiled, carpeted floors or wood or laminate can be attached. 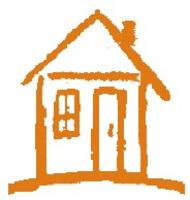 The only solid thing about a house is usually the "basement". This is usually made with shotcrete. In the case of the basement, there is also the "finished" or "unfinished" variant. Unfinished means raw concrete floor - usually no insulation, wooden beams of the intermediate floor to the ground floor including water, sewer pipes, gas pipes, power lines etc. are visible. The “finished” variant is then isolated and usually converted into a party room or media room. Noise insulation is not available even in very expensive apartments or houses. Homes with a basement are particularly popular on the east coast, but are less common on the west coast of the United States.

Windows are only nailed into the facade and are poorly insulated. Accordingly, it can get hot in the house in summer and cold in winter. In the meantime there are also double-glazed windows, but the quality cannot usually be compared with the German windows. But they only cost a fraction of it. Even very expensive houses are often equipped with single glazing.

Not without air conditioning!

Air conditioning systems are available in practically all apartments or houses, mostly as Central air conditioning. Less expensive houses or apartments are equipped with so-called individual air conditioning systems, which are recessed in the wall or in a window - an unpopular variant: in summer the entire house is cooled, in winter the entire house is heated accordingly. The cooled or heated air is then passed through a duct system running through the whole house into the respective rooms; it is made of simple sheet metal, without any insulation.

With this in mind, it is becoming clear to everyone that energy bills in the US can reach a few hundred dollars a month. In summer, the air conditioning runs day and night, otherwise the house cannot be kept at a moderate temperature. As a result, many Americans have an electric bill of $ 600 to $ 800 a month. In winter about the same with the gas bill.

Not least because of the increasingly violent hurricanes, it seems incomprehensible why one does not fall back on a conventional construction method with stone in the USA.

Houses of the architectural style described above, in which the upper middle class to the upper class live, cost in the Washington D.C. and easily $ 800,000 to $ 1.3 million in the state of Maryland. The upper limit is open and only varies in the size of the house and in the exclusivity of the interior and the property.

This article is an excerpt from Live and work in the U.S.

Did this article help you?

do you have feedback, an update or a question about this topic? Comment here: