What do you think of Filipino food

Anyone who has traveled a little in Southeast Asia will often have found a very spicy and vegetable-based food culture. But not necessarily like that in the Philippines. Whether it goes back to the Spanish colonial times, indigenous epochs before that or to American influence - Filipino food is characterized by a particularly colorful mix.

This does not necessarily have to do with vegetables and fruit, but also (unfortunately) more and more often with junk food in the form of sweets or classic burger chains with a lot of meat and fat. The Philippines are not only world champions in rice food - the daily requirement per capita should be around 200-300 g rice per day - but also when it comes to blood sugar, obesity, diabetes, etc.

Filipino fiesta: the suckling pig is a must 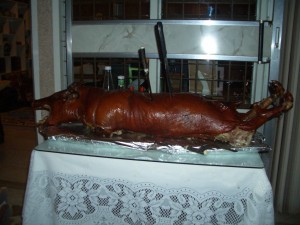 Especially in medium-sized and wealthy families, it is a "sign of prosperity" when you can show one or the other lifebuoy. Anyone who has ever attended a typical Filipino fiesta, as it takes place locally every year, will be able to remember the mountains of meat that come from freshly slaughtered suckling pigs - paired with lots of soft drinks, beer and tanduay, the Filipino rum.

Certainly this is also a particularly festive occasion, but the triumphant advance of meat-heavy food has its consequences everywhere, so that pork and chicken are generally eaten a lot and with pleasure. On a stroll through the market, you can often find different types of barbecue, pork adobo (pork in a typical sweet and sour sauce) and other meat dishes.

Filipino vegetables rarely come "without something in them"

If you have not ordered your vegetables expressly without meat, you will in most cases find some in your meal - it is better to say three times that you do not want anything “for better taste” in them. There are probably fewer countries in the world that can boast such an abundance of vegetables and fruits as in the Philippines. The volcanic soil is very fertile, so pretty much anything that takes root can be grown. 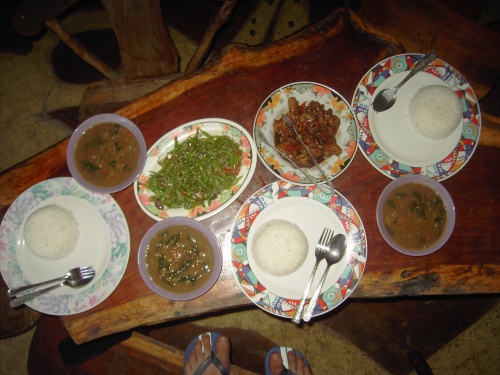 More exotic vegetables such as okra or mongoose can be found as well as pumpkins, potatoes, spinach and other greens. Incidentally, tropical fruits such as mango, jack-fruit, bananas and others can also be well placed in salads. Kamungay leaves are ideal to complement your vegetable soup or to brew tea and are also said to be effective against all sorts of ailments.

One of the most famous delicacies in Filipino cuisine is freshly made Kinilaw. This could be seen as an alternative to Japanese sashimi and is nothing more than raw fish in a spicy sauce with vinegar, a little garlic, onions, chilli, a little lime (calamansi) and other secret ingredients, which are often eaten as a side dish to drink. 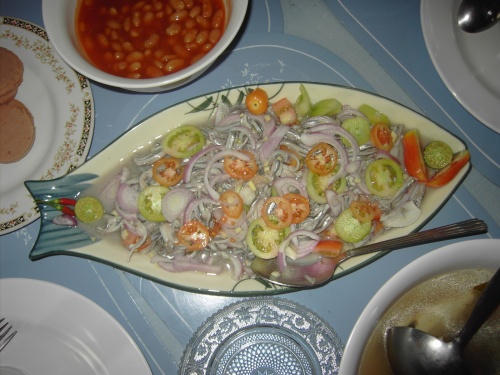 This is then referred to as “pulutan” or “(sum) suman”: In the Philippines, a small plate / bowl is usually served with beer or rum, filled with kinilaw, fish or meat to add a little “variety” or simply just being able to drink longer. In addition to Kinilaw, there are of course all other conceivable fish and seafood dishes: 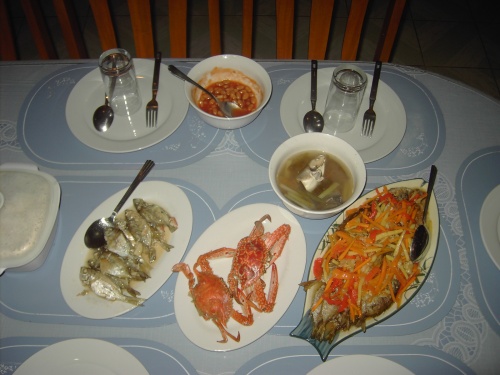 These include king prawns, sea bream (e.g. in sweet and sour sauce with pieces of pineapple and carrots; the photo shows the famous "Lapu-Lapu"), squids, mussels, eels and everything else you can find in the water. Filipino food is therefore quite varied - if you only want to. We will go into more detail in the future on typical Filipino dishes such as balut and dog [fun] - if you have a few suggestions, feel free to share them here;)

Read more about the Philippinen Tours mission here. Information about our tours can be found on this page. Subscribe to our newsletter if you are interested in exclusive round trip offers.