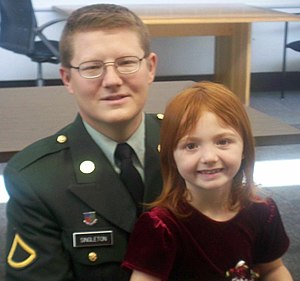 An American father with his adopted daughter

Adoption means that people become the parents of a child. They are not the birth parents, which means that the child had other parents. The child has lost the birth parents or for some reason they cannot take care of the child. The new parents are called adoptive parents, and the adopted child is an adopted child. Otherwise, the adoptive parents are just as much parents as others.

Not all people who want to have children can have children. Then they report to the state that they would like to adopt. The state checks whether people would be good parents. Often, however, there is also an adoption within a family: sometimes, for example, a woman already has a child, but she leaves the child's father. Then she meets a new man. After a while, the new man may adopt the child.

It can also be the case that you adopt someone who is already an adult. In this way, the adoptee can take the name of the adoptive parents and later inherit their belongings. This is what people of nobility do, for example, with a special name. If they don't have children of their own, they want the name not to die out. It has also happened that the adoptees paid money for it because they wanted the special name.

There used to be more adoptions. At that time it happened more often that a woman became pregnant without her wanting to. Abortions were also prohibited: the unborn child was not allowed to have an abortion. Especially when a very young woman became a mother, even though she was not married, the child was taken away from her. The child was then sent to an orphanage or to adoptive parents.

Today, however, far fewer children are born. This is also due to the use of contraception, which prevents you from becoming pregnant unintentionally. When a very young, unmarried woman has a child, the state helps her raise the child herself. If a child loses its parents, for example in an accident, the child is usually still staying with relatives.

If you want to adopt today, there is often no child for you. The easiest way to adopt a child from abroad. But in other countries too, for the same reasons, there are fewer children than before. In a large country like Germany, only a few thousand children are adopted each year.

Even so, many people believe that adoption is common. It may be because they read it in the newspaper when a famous person adopts a child. In addition, adoptions are common in films and books: Many people find such a story exciting.

What does it mean to a child when they are adopted?

Most adoptive children want to know who the birth parents are when they are older. For this, some travel far away to the country of their birth parents. They also want to know the reason why they were given away. Some are lucky enough to at least find their birth mother, others not. Usually, such a trip doesn't change the love for your adoptive parents.

There are also other search results for “Adoption” from Blinde Kuh and Ask Finn.