How often do you call your mother

Danger! This episode transcript has not yet been proofread. Here's how you can participate in the correction. 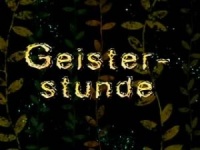 In the sky above bikini bottom

(The Flying Dutchman flies his ship through ghost fog.)

Flying Dutchman: "Cursed be this cursed ghost mist, I can barely see the tip of my own nose! (gets fog in the eyes) Aaah! "

(The ship crashes against a rock and the flying Dutchman falls to the ground.)

Flying Dutchman: "Aaah! (falls down on the rock) Hmpf! "

(He lands on the floor. The debris falls on him. He emerges sadly from underneath.)

(His ship crumbles to dust. Annoyed, he takes out a cell phone and dials.)

Flying Dutchman: (telephoned) "Hello breakdown service! Yes, I stayed there. My whereabouts, the address? Private or business? (looks at SpongeBob's house) Private, I would say! "

(SpongeBob walks down the hall. The Flying Dutchman comes through the ground.)

In the snail road

(SpongeBob runs out to Squidward's house in a panic.) 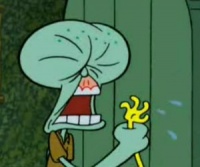 (SpongeBob is startled and runs into his house.)

(The Flying Dutchman picks up Gary.)

(The room SpongeBob is in goes up in flames.)

Flying Dutchman: "Just don't make yourself too comfortable, little one!"

(From now on, the Flying Dutchman teaches SpongeBob how to scare.)

(SpongeBob's house is on fire, grimacing, and laughing deeply and creepily.)

(SpongeBob is in his bed.)

(SpongeBob closes his eyes and his nose starts to itch. He scratches it with a yellow tentacle, whereupon he tears the blanket off his body and discovers that he has grown six tentacles.)

(The Flying Dutchman lurks on the diving board over SpongeBob's bed and laughs.) 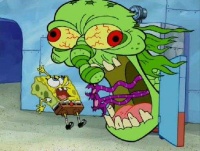 (SpongeBob goes to the fridge in a good mood and opens it. A giant monster sticks its head out of the fridge towards SpongeBob and yells at him. The Flying Dutchman appears in the door and laughs, SpongeBob laughs intimidated.)
(SpongeBob goes to the mirror and examines himself when a monster appears from above and tears its head off. SpongeBob utters a contemptuous "Uagh" and walks away, bored.)
(SpongeBob takes the Kelpo box and tries to empty the contents into his bowl. But all the eyeballs come out. SpongeBob looks at the eyeballs, utters another "Uägh" and walks away. The Flying Dutchman is amazed.)
(SpongeBob goes to a chest of drawers, pulls open the lower drawer, picks up a skeleton from the drawer, annoyed, and then takes out his hat.)
(When SpongeBob tries to leave the house, a monster appears out of the ground, which turns into another monster over and over again. SpongeBob is clearly bored. Finally the head and arms of the flying Dutchman appear in the body of a monster, he is amazed.)

In the mattress market

(A customer is looking at mattresses with a salesperson.)

customer: “May I try it out? (lies down in) Yes, it is really cozy and comfortable. "

(As soon as the seller has left, his customer falls asleep on the mattress. The Flying Dutchman appears and tries by all means to scare the customer. But he does not succeed because he sleeps deeply and soundly. Finally he gives up.)

Flying Dutchman: "Oh, forget it!" (disappears)
Seller: (come back) "And what do you say?"

(The customer wakes up and screams like a stick.)

The Flying Dutchman tries to scare a girl. © Viacom

(The Flying Dutchman tries to scare a girl who is jumping rope. He sneaks up from behind, but is thrown to the ground by the rope.)

Flying Dutchman: “Now it is official. I am simply not scary anymore. "
Spongebob: “Well, I don't want to hear that at all! You're just a little out of shape, that's all! "
Flying Dutchman: "Maybe I just need a break, free time or something."
Spongebob: "Clear! Take a rest! "
Flying Dutchman: “Yes, maybe with a good friend. (SpongeBob doesn't look at him very enthusiastically) On a comfortable sofa. Uh In a pineapple. (SpongeBob still looks aghast) Not for long, just for a few days. (no emotion at SpongeBob) Until I'm fit again! "
teller: "Six months later."

(There is chaos in the whole house. There are some ghosts there and also Susie Fisch, who is sitting on the sofa with the Flying Dutchman - who has since gained heavily in weight.)

ghost: "Yeah, Fliegi!" (I can't understand the rest, someone can add!)
Flying Dutchman: “It's unbelievable how much we have in common! You like teddy bears, I like teddy bears, you like ponies and I like ponies! "
Susie fish: (angrily points to his hand) "Is that a wedding ring?"
Flying Dutchman: "Oh, the one. Oh forget him! (throws it away, on SpongeBob's nose) Uhahaha! "
Spongebob: (angry) "What is actually going on here, huh ?!"
Flying Dutchman: "Oh, SpongeBob, don't be joking, okay?"
Spirit 2: "Careful, down there!" (drives a motorcycle through the house)

(SpongeBob screams in panic. The ghost drives the motorcycle against the wall and floats through it. Then he looks back inside.)

Spirit 2: "And how was that?"
Flying Dutchman: "The third time it gets better and better!"
Spongebob: (angry) "Oh no! No no no no no! (opens the door) So people! DISAPPEARS!! GET OUT!!"
Flying Dutchman: "All right, boys and girls, that's it! (pushes Susie Fisch to the door) For you too, honey! "

(Everyone leaves the house.)

Spongebob: (angry) "Fliegi, how long do you want to hang around on this sofa?"
Flying Dutchman: "Well, it's comfortable."
Spongebob: (shows him a mirror) “Look in the mirror. You look downright spooky! "
Flying Dutchman: “You are right, SpongeBob. That is the horror. "
Spongebob: "Exactly. But we will tear you out of your wretched condition. (pulls out a video) And with audio visual aids! Take a close look! "(inserts the video)
Flying Dutchman: (angry) "What the heck is that?"
Spongebob: "This is a journey into self-awareness!"

The power from within

An excerpt from the video. © Viacom

(A muscular fish strikes the gong. Then you see an eagle flying over a valley. Then you can see fish disguised as monks who ride on inline skates.)

(One holds up a Madaillon.)

medallion: "The power from within!"

(The film is over and the Flying Dutchman has tears in his eyes.)

Flying Dutchman: "That was wonderful…"
Spongebob: (throws him his clothes) “And now off the sofa and into your clothes, Dutch! That is the kick-off for the seriousness of life! "

(It's night. SpongeBob and the Flying Dutchman are hiding in a bush. You see an old woman walking down the street wearing headphones.)

Spongebob: "Let's start with something simple: do you think you can manage this old lady?"
Flying Dutchman: "That was a joke, wasn't it? To scare them is a laughing stock! "
Spongebob: (proud) “That's exactly what I want to hear from the Flying Dutchman! And now put your words into practice! "
Flying Dutchman: "Zero problem, old buddy!"

(The Flying Dutchman flies out of his hiding place and tries to scare the old lady with lightning bolts and creepy noises. However, she is a little short-sighted and does not recognize the seriousness of the situation.)

(Change of scene: SpongeBob flies through the night on the Flying Dutchman. Then the two of them see the gym.)

(He flies through the wall, SpongeBob sticks to her.)

(Larry is currently training with dumbbells. The Flying Dutchman appears and tries to scare him. Larry is only interested in his reflection, however.)

Larry: "Boy, look at the pecs! That is phenomenal! Well trained down to the last fiber, look at your muscles! "

(The Flying Dutchman does creepy things behind him that Larry should actually see in the mirror. And indeed: he is frightened. SpongeBob is watching from outside.)

Spongebob: "Haha, now he has it!"
Larry: (grabs his chest muscle) “My latissimus dorsi is really wobbly. I have to go to the rowing machine immediately! "

Flying Dutchman: (depressed) “It doesn't make sense anymore. I can't scare anyone anymore! Looks like people don't believe in ghosts anymore, right? "
Spongebob: "Hey, wait a minute! I think I now know how we can solve your problems! "(whispers something to him)

(Squidward gets out of bed and goes "Dadadu" singing to the mirror to powder his face. The powder puff is torn from his hand and powdered him wildly as if by magic. Then green ghost fog appears. Then you hear the voice of Squidward's mother.)

(The face has melted and falls to the ground like a waterfall. Then a huge clarinet appears and plays loud music. Squidward covers his ears, but the clarinet goes through his ears. Then she begins to speak - in the voice of the Flying Dutchman.)

Flying Dutchman: (by the clarinet) "I heard you don't believe in ghosts!"
Squidward: "What kind of ghosts?"

(The clarinet becomes a ring to which Squidward is tied. The Flying Dutchman holds the ring and suddenly both float above ghost fog in the air.)

(He throws the ring away with Squidward. This flies back into his house and against the wall.)

(Eyes “swim” on the floor. They get together and a monster appears and eats Squidward. Then he falls back into his house through a hole. A tall SpongeBob leans over him, grinning and breathing hard.)

(The eyes "snake" away from SpongeBob's head and his mouth opens. Numerous spiders crawl out of these openings. The Flying Dutchman finally appears among them and laughs angrily. Then he shows the frightened Squidward another finger trick.)

Flying Dutchman: "Ooh, it's scary, isn't it?"
Squidward: "No! No!! That is absolutely impossible! (runs away) A ghost! A ghost"
Spongebob: (comes out happily from behind a curtain) "Fliegi! It's worked out! You're scary again! "
Flying Dutchman: (happy) “And I've got my self-confidence back! I feel like I can scare anyone's hearts out! And that's only thanks to you, my boy! "
Spongebob: "Maybe your ship will soon be repaired!"
Flying Dutchman: "I have to make you a confession about that, SpongeBob: My ship was ready three months ago. It was really nice to live with you! (flies up to his ghost ship) Oh, I almost forgot: I left you a surprise for my inconvenience! Now it’s high time to plunge a few souls into ruin! (drives off) Uhahaha! "

(Meanwhile, SpongeBob finds the surprise: A present! He opens it and a hand reaches out and tugs him into the gift. Creepy noises can be heard, but SpongeBob laughs.)

Please note that the contents of this page Not under the GNU Free Documentation License stand, but the majority of the rights with the Deutsche Synchron Filmgesellschaft mbH & Co. lie. You are not allowed to reproduce the texts - even in part - without their permission.