Should we take away everyone's guns

It is wrong to demand stricter gun laws because of killing sprees. Social problems cannot be solved by prohibitions. 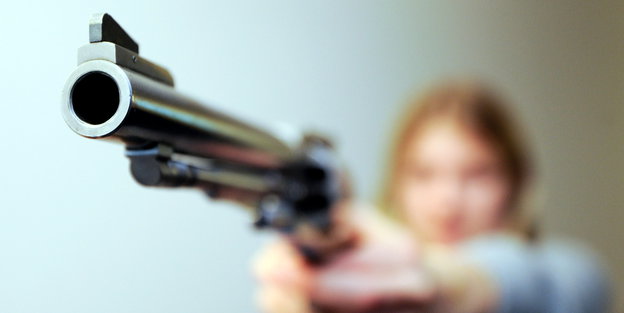 Bang! Stricter gun laws weaken the power of the people over the state. Image: dapd

Germany has had bad experiences with state firearms controls. For example with the Reich Weapons Act of 1938, as a result of which Sinti, Roma, homosexuals and Jews were categorically disarmed.

The state persecution of these minorities would have been different episodically if the majority had insisted in the best bourgeois manner on the right to bear arms, which has been the hallmark of the Citoyen since the French Revolution. It is possible that the democratic revolution of 1848, which failed with such serious consequences, would have succeeded in Germany had there been more liberal gun laws beforehand.

It is all the more astonishing that there is such broad agreement in this country with regard to stricter state gun control, as is currently being discussed in the USA. Also combined with general indignation about the realm of the trivial on the other side of the Atlantic, in which backwoodsmen joke about one magazine after the other.

Of course there are campus shootouts like the recent one at Lone Star College in - of course - Texas. Of course there are rampages like in Newtown. And of course the answer to all of this can only be: "Ban!" can fire from Newtown. It doesn't matter that almost every first person shooter has said M16 assault rifle in their arsenal. Regardless of the fact that it has been the standard for the US armed forces for 50 years.

Make the goat to the gardener

With such unanimity one could think that the political catastrophes of the 20th century, the mountains of corpses of the 21st century in Iraq and Afghanistan were the work of young people running amok, and young psychopaths approved arms exports in crisis regions. Of course this is not the case. And of course, state gun control always means turning the goat into a gardener.

Similar to the German mainstream, this problem can also be seen on the democratically dominated east coast. In response to Newtown, New York State has hastily waved through the country's strictest gun law to date. It includes psychological criteria and the ban on assault rifles such as the M16. Obama will soon submit a similar draft to Congress. Whether he can get away with it, other states could follow New York's example.

The victims of murders with firearms only make up a fraction of the deaths attributable to traffic, suicide, tobacco and fast food. In 2010, for example, there were 11,078 deaths in the United States as a result of firearms, 37,961 as a result of traffic accidents, 38,364 as a result of suicides, 158,318 as a result of lung cancer and 780,213 as a result of the most common cardiovascular diseases. Wouldn't it make more sense to ban McDonald’s?

But there are better arguments against the current gun control initiative than comparing it to other deadly civilization habits. When it comes to urban violence - at the very heart of the gun problem - it is socio-economic considerations that matter, not the mere availability of firearms.

The arms debate is a sham debate

Although middle-class white gun owners are prone to suicide and the murder of family members, they do not blast each other en masse. But that in turn do chances, young black men. The arms debate is a sham debate. Actually, it should be about racism and class differences.

The white middle-class samo runner is the convenient exception that creates the illusion of simply being able to forbid an uncomfortable structural problem. An illusion that is all the more unworldly since the lion's share of weapons used in urban violence comes from illegal sources. Bans only apply to those who legally acquire their weapons. The black market is already looking forward to a boom due to stricter laws.

So far it just means that gun regulations are not necessarily useful, but neither are they insanely harmful. Although the majority has now turned, a large proportion of Americans are sensitive to the current initiative for more weighty reasons. This has to do with American and liberal democracy in general, with the right to gun ownership enshrined in the Bill of Rights.

A right to self-defense

It goes back to the liberal theorist John Locke, who, in contrast to Thomas Hobbes, granted the citizen a right to self-defense against the state: “Must the people surrender to tyranny?” He wrote. “Self-defense is part of natural law; it must not be denied to the community, not even against the king himself. "

About a hundred years after these sentences were written, the Founding Fathers referred to them in the Declaration of Independence, establishing inalienable rights, and writing “that if a government proves harmful for these purposes, it is the right of the people to change it or abolish it. "

The passage provides a legitimation of the war of independence. This is how the relevant legal text on American firearms law is to be understood, the second amendment to the constitution, which says: “Since a well-trained militia is necessary for the security of a free state, the right of the people to own and carry weapons is allowed not be affected. "

Although it initially appears that this only refers to defense against foreign powers, in the context of the War of Independence it is clear that internal threats are also meant. Or better: from above. Like similar ordinances in the course of the French Revolution, the “Second Amendment” is a kind of resistance paragraph, which also guarantees the condition of resistance - namely, to possess weapons and to practice using them.

Whether it was the "Second Amendment" that the USA - in contrast to many European countries with stricter gun laws - has so far not fallen victim to totalitarianism, is not known. One thing is certain: the Newtown rampage was not a political resistance. Nevertheless, it is dangerous to instrumentalize the individual mentally ill to consolidate a monopoly of force that could be insurmountable in an emergency.

The right to gun ownership is based on the liberal utopia that society depends on the free will of individuals and that one trusts one another in matters of life and death. This is accepted on the autobahn. Categorically rejecting private gun ownership is therefore a political gesture that seeks to give preference to authoritarian control mechanisms over liberal ones.

Strict opponents of guns gloss over a fact that, despite Habermasian discourse kitsch, will apply as long as there are people: that power comes from the barrel of a gun and its concentration is not unreservedly desirable.