How can the youth participate in politics

More than voting: How else can I have a say?

You can also participate in social or political life in many other ways: 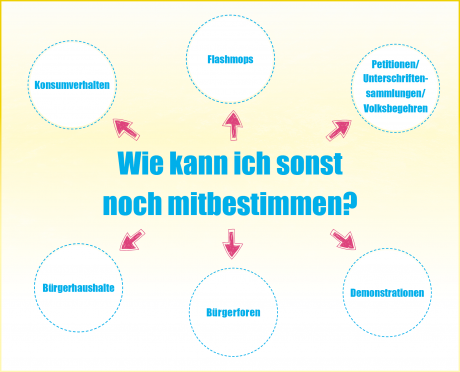 The easiest way to express your opinion is about what you buy. You do it almost every day and whether in business or on the internet - your behavior has an impact. This is how you express preferences and can control political decisions. This extends to boycotts of consumption against individual countries, political regimes or companies whose decisions you do not agree with. Examples of politically motivated consumer behavior are the increasing rejection of nuclear power, the rejection of the E10 fuel or the boycott of BP filling stations after the oil spill in the Gulf of Mexico in 2010. If you don't pay for the weekend shopping yourself, you can still get your parents up draw attention to certain products. The food and clothing industries are also sensitive to controlled consumer behavior. Meat, fish or eggs from factory farming are increasingly being rejected and organic products or products with a fair trade label are increasingly being demanded.

Flash mobs
Flash mobs are especially popular with young people to express their opinions. They describe a short, seemingly spontaneous crowd of people in public or semi-public places, where the participants do not know each other personally, but all do the same. They usually don't last longer than an hour and are often highly creative. Politically motivated flash mobs are also known as smart mobs. Such an event is organized almost exclusively via the Internet. Social networks such as Facebook and Twitter help organize the events. It is called upon to come to a place at a certain time in order to protest against an issue there.

Demonstrations
They are a classic of political expression. You can participate in a wide variety of forms. There are smaller individual actions, mass protests, rallies, silent marches, vigils, human chains, sit-in strikes or blockades. Demonstrations must be registered. Often parties, trade unions or associations take over the organization. In Brandneburg, for example, there are regular demonstrations against right-wing extremism and there are various successful projects such as “Potsdam! shows color ”and“ Tolerant Brandenburg ”. You can find out more about the events on the websites of the state or of the “Action Alliance Brandenburg”. 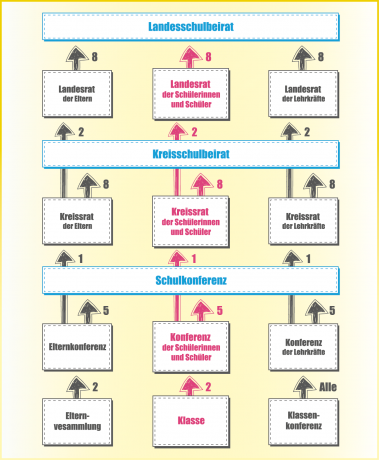 Petitions / collections of signatures / referendums
A petition often supports a written concern or a complaint to a government agency. If you do not agree with measures or decisions by the state authorities, you can, for example, contact the state parliament's petitions committee. The committee will review the decisions and, if necessary, work towards changes. Parties often use signature campaigns to demonstrate greater closeness to the citizenry and to present meaningful data to the government. You can also collect signatures on a specific topic yourself and submit them to your community or state parliament in order to draw attention to a problem. Unfortunately, mere collections of signatures are only a, albeit expressive, bundling of opinions, which are still dependent on the perception and the will to implement the rulers. You have no legal right to be heard. Signature campaigns become legally binding if they initiate a popular or citizens 'initiative and, if successful, a popular or citizens' initiative. Popular initiatives and referendums affect the state level, citizens' initiatives and referendums take place at the municipal level. In order to be able to sign a valid signature for an initiative or a request at state level, however, you must be 18 years old. There are only exceptions if the subject of the initiative primarily concerns young people. Then young people aged 16 and over can also take part. You can sign for citizens' initiatives and petitions from the age of 16.

Citizens forums
Citizens forums invite citizens to an active discussion, including the younger ones. The clients are political institutions, parties or associations. They exist at the municipal, federal and European level. Thoughts, opinions, aspects, questions or problems are collected on a topic and presented to the public in further steps. This opens up the great breadth and depth of the topic from the perspective of all participants. The aim of such initiatives is to involve people of all ages in the political decision-making process, to motivate them to become politically active and to create a feeling of togetherness. After gathering ideas, work steps are planned for the upcoming tasks and responsibilities are defined. Solutions are sought for emerging conflicts. Topics are often education, demography, democracy and participation, family lifestyles, integration as well as solidarity and justice. So all topics that also concern you!

Participatory budgeting
You decide for yourself about part of the municipality's budget. So you can make suggestions about what you think the city should spend money on. For example for sports facilities, youth clubs or educational offers. Participatory budgeting is relatively new. The aim is to avoid corruption, to involve the population more in municipal decision-making processes, to counteract the waste of taxpayers' money and also to include less well-represented citizens from lower-income neighborhoods. Community politics should become more just. The citizens agree on the use of the available funds independently in various process sections. The processes are set individually in each municipality. In general, participatory budgeting consists of the following steps: 1. Collection of proposals (can be done via the Internet, by telephone and in writing), 2. Prioritization, 3. Sorting, 4. Voting, 5. Handover to the community representatives, 6. Resolution, 7. Implementation and 8. Accountability. Consultations and discussions take place between the individual steps. In Potsdam everyone can make suggestions on participatory budgeting. If you are 14 years or older, you can vote on the projects.