Between the kitchen and the factory: women on the home front

A couple say goodbye to each other on this German propaganda poster from the First World War. Both look wistfully into the distance, into which the man must now set off. He wears a German field uniform, and soon he will have to fight on the front. His wife trustingly places her left arm on his shoulder. But with the other hand she gives him something other than a final touch: She puts a hand grenade in his hand, in addition to the many others that the soldier is already carrying in his belt. "German women work in the home army!" Is written next to this scene.

The message of this propaganda poster is clear: women must work in the ammunition and arms factories to ensure that their men have weapons on the distant front. But not only in the arms industry suddenly women had to replace the many men who had fought and died on the fronts since August 1914.

Women now delivered the mail, toiled in the factories, drove trucks and trams, sown the fields and brought in the harvest. The use of women was desired and necessary on the part of politics and the military - only in this way could the home front ensure the supply of war equipment and food. Suddenly women in the warring nations were allowed and should exercise jobs that were previously reserved for men in society. 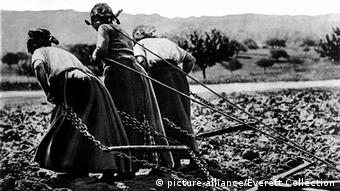 Even hard work in industry has been left to women since the outbreak of war - in the German Reich the proportion of working women rose by twelve percent by 1918. On the part of the male workers, the employment of women in the industrial plants was extremely unpopular. "Not a night without one or more women collapsing at the machines," complained a German worker. In this judgment, male prejudices against female employees are mixed up with the fear of men that, as the "strong sex", they will only be classified for physically demanding work. The efforts of state propaganda to mobilize women for work in industry fell far short of the expectations of politicians and the military in Germany.

No break from role stereotypes

Women were not only paid less than men, they also mostly had no training as skilled workers. Their simultaneous responsibility for children and household made such occupation unattractive and not very lucrative for them. Ironically, the outbreak of war with its propaganda slogans contributed to the fact that the traditional role models in the relationship between men and women were solidified again. If the gender relations had already slowly changed before the war, the man was now the "man" again, a warrior, a hero, who in his male role as a provider of his family was only held back by his task as a soldier. The working woman was considered an exception in times of need: If the war was over and the men came back, according to the social opinion, the women would have to take on their traditional role as housewives and mothers again. 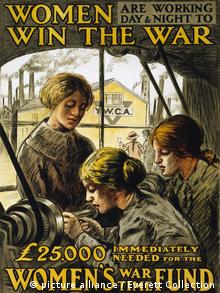 Women had to replace the men who were drawn to war

The women's movement, which has long campaigned for equality, joined the truce policy in Germany. According to this, domestic political conflicts should rest until the war is won. Many of the activists involved in the women's movement saw the war as an opportunity to prove the capabilities of women - in order to achieve more equality in this way. Only a few women, like the SPD politician Clara Zetkin, radically rejected the war.

The woman as a "mother and nurse"

In addition to being forced to work in a factory, the propaganda also assigned women an allegedly typically "womanly" task in times of war: as a nurse who was supposed to take care of the wounded in the military hospitals and hospitals. Again and again, propaganda pictures showed gentle sisters who sacrificed themselves for the needy. And finally, politicians and the military worried about the falling birth rates since the beginning of the war - with catastrophic losses at the front at the same time. As the women who gave birth, the women were called upon to replace the losses with as many births as possible - and to be faithful and loyal to their husbands. 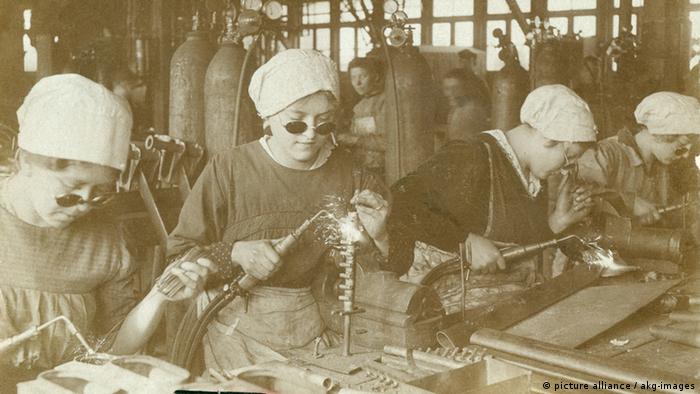 The propaganda also used the work of women at home to mobilize soldiers at the front. A French propaganda photo shows a scene of sheer physical exertion: on chains and ropes, three women pull a plow across the field with great difficulty in order to be able to sow the seeds for the next harvest. They have neither draft animals nor tractors to make their hard work easier - they only cultivate the field with their will so that they can supply the land with grain. "The women of France bear the burden," it says.

"Peace must be made"

In 1916, however, some Hamburg women had enough of the burden of war. They urged the city's senate: "We want our men and sons from the war back and we don't want to go hungry any longer - peace has to be made" The appeal went unheard - the war was to rage for another two years, in which women in all participating countries made enormous sacrifices on the so-called "home front". And this despite the fact that women did not even enjoy the same rights as their husbands. It was not until 1918 that they were given the right to vote in Germany, in Great Britain in 1928 and in France in 1944.