How does physical abuse affect a child?

Corporal punishment is just as bad as abuse and neglect

According to an American study - published in Child Maltreatment - children who were physically punished at the age of three showed similar behavioral problems at the age of five as children who had traumatic experiences as a toddler, were abused or neglected. 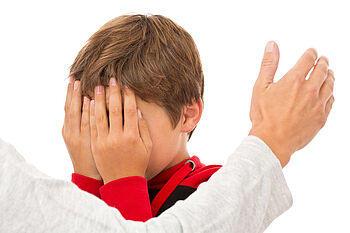 “These results show how important it is to keep pointing out the consequences of corporal punishment. Parents are stressed, especially in times of crisis, and tend to react in an uncontrolled manner, ”warns Dr. Ulrich Fegeler, pediatrician and member of the expert committee of the professional association of paediatricians (BVKJ). Other research has been able to observe an increase in the risk of abuse among children as a result of the pandemic, among other things because many families had got into economic hardship. Some mothers said in surveys that they had hit, yelled at or neglected their child more often during the pandemic.

In particular, externalizing behavior problems, such as B. Attention disorders, disorders of social behavior with oppositional, rebellious, aggressive behavior as a result of corporal punishment are described by the scientists in the publication in the journal “Child Maltreatment”. These behaviors start in early childhood. “Much research over the past 20 years has shown that corporal punishment is associated with an increased risk of negative physical, mental, and behavioral problems. And there are no studies to suggest that corporal punishment in children has any use or advantage as a means of discipline, ”concludes Dr. Fegeler summarizes the current state of knowledge. Hitting may help in the short term to stop unwanted behavior, but it has serious long-term consequences and threatens to escalate. If light corporal punishments no longer work, parents are tempted to “lend a hand” more and longer. These children learn from the “example” of their parents and later use violence themselves as a solution to their problems. For this reason, corporal punishment against children is prohibited in most European countries.

Pediatrician can point out offers of help

Before parents are completely overwhelmed and run the risk of losing their temper, they should contact their pediatrician. "There are many support offers for young families - for example the 'Early Help' facility, which assists parents from pregnancy and families with children up to three years of age in looking after and encouraging their children," says Dr. Fegeler. This “early help” is coordinated in local networks.

Sources: Child Maltreatment, J Pediatr., BMJ Paediatrics
__________________
This is a press release from the Professional Association of Pediatricians (BVKJ). This press release or parts of the article can be printed under the following source: www.kinderaerzte-im-netz.de. In the case of publication in online media, the source must be linked to this home page or to a subpage of the BVKJ parent portal. In principle, photos and images may not be used.