Have you seen angels 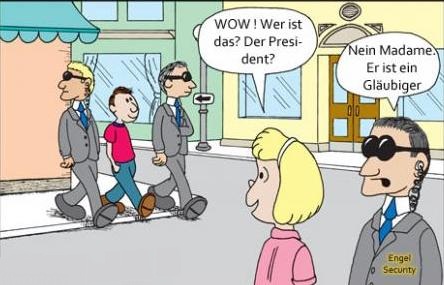 I prayed today and then God gave me the tip to write something about angels.

Until then, I admit that angels are kitschy figures with wings that dangle around in every store at Christmas.

But well, then I'll just have a look at the Bible to find out what it says about angels. Asked the Bible server ... he told me, depending on the Bible translation, that there are an average of 300 places where it is about angels. Funny, I never noticed.

If angels are reported so often in there, then they are probably important too.

I notice that angels are like herd animals. I have not now read all of the angelic Bible passages, but the ones that I have read, the angels often appear in large flocks.

Today I would like to give you a little overview of what angels actually do for a job ... therefore mess around with something.

The Hebrew Letter says something about a big party with thousands of angels on the mat:

"You're going to meet thousands of angels and go to a big party for God!"
Hebrews 12:22 Volxbibel

When Jesus was captured by soldiers, he said to his friend:

"Don't you know that all I have to do is ask my father for help and he'll send me more than twelve legions of angels right away?"
Matthew 26:53

Wiki tells me that there are 3,000-6,000 soldiers in a legion. A legion times twelve results in a maximum of 72,000 angels. Bruddaaal. There are roughly the same number of seats in the Berlin Olympic Stadium.

A stadium full of angels.

In Revelation I found another passage where John describes what it will look like in heaven. It says:

"After that I saw many thousands and thousands of angels, an innumerable multitude, and I heard them shouting something together. They stood around the throne,"
Revelation 5:11

Now I imagine what it would be like to see them ?! Thousands of angels around me.

Are they all sitting in my living room? Sitting next to me on the sofa, on the floor or on the shelves? Or are they flying around here?

Imagine you have an important exam, you are totally afraid and you are very excited…. and then you would see the many thousands of angels around you, would you be more relaxed then?

Or when your son practices the latest stunts with his BMX bike and you would see the many angels protecting him…. Would you then be less afraid for him?

I think angels somehow live in another "Dimension" as one of us and our imagination is not enough to imagine what it looks like.

Then I found various biblical passages where it says that these angels also have a lot of power and power. For example, Paul writes that Jesus ...

... will come from heaven with all his mighty angels.
2. Thessalonians 1.7

One important thing that I noticed on my angel tour of the Bible: The angels, as I understand it, only listen to God and worship him.

"All angels are only beings who serve God. He sends them out to help everyone whom he wants to give salvation to."
Hebrews 1:14

"And all the angels stood around the throne and around the elders and the four living beings. And they fell down before the throne and worshiped God. They cried," Amen! Praise and glory and wisdom and thanks and honor and power and strength belong to our God forever and ever. Amen! "
Revelation 7: 11-12

Jesus says angels are close to his Heavenly Father:

"For I tell you that your angels in heaven are always especially close to my heavenly Father."
Matthew 18:10

So the angels serve God and thus also Jesus:

"All angels of God should worship him."
Hebrews 1: 6

A very well-known passage from the Bible, which is often found on greeting cards, is this:

"Because God sent his angels to protect you wherever you go."
Psalm 91:11

There are an incredible number of places in the Bible that speak of angels. The best thing to do is to read yourself that you can do that quite well at Bibelserver. One of my favorite passages on the subject of "angels" at the end:

"The angels of God are just as happy when a single sinner turns to God."
Luke 15:10

I would like to ask you two more questions:

I wish you whole legions of angels. Be blessed by them.
Your Jesus-Punk

© Photo above: Cartoon by Mike Waters
Text: Inspirations from the book "Durst" by Max Lucado

Who is writing this blog and why? - You will find out if you click HERE.
Can I support you and your blog work? Yes, it is possible, click HERE. I thank you from the bottom of my heart!