What is a photo on your phone

Many users capture valuable memories with the smartphone camera. But how do you get the pictures on the computer or laptop? There are several methods of transferring photos and videos based on different interfaces. In this guide, we illustrate the media transfer of an Android smartphone via USB, Bluetooth, DLNA, the cloud and using a memory card. Some methods require special accessories.

By the way, in a separate guide we explain how to copy photos from the iPhone to a Windows PC or Apple Mac.

Media transfer via USB: Pay attention to the correct cable

A USB cable is included with all Android mobile devices on sale. Micro-USB has been established as the standard for several years, but the format is gradually being replaced by the newer USB Type-C. So there are currently smartphones and tablets with different USB connections in circulation, which can lead to problems with media transmission via cable. For example, if you have a micro-USB cell phone and you visit a friend to transfer your vacation memories to their computer, a cable of the same format is required. If there is only one model with USB Type C on site, the process cannot take place this way. So make sure you have the correct cable available before you plan to transfer USB media.

If you have the right cable at hand, copying via cable from the mobile phone to the PC is usually quite simple. You connect both end devices with the USB cable, whereupon Windows should install the appropriate drivers. Your smartphone will then ask you for the connection method you want. 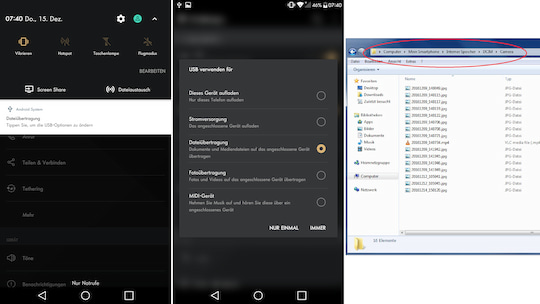 Media transfer via USB
Screenshots: teltarif.de / Andre Reinhardt You can now choose "File transfer" or "Media transfer". Since the first method takes more file formats into account, it is recommended. The recorded photos and videos can usually be found in the folder path DCIM / Camera. After the file transfer, we recommend that you first disconnect the mobile phone listed as a drive from the computer after a right-click - followed by the "Eject" option. 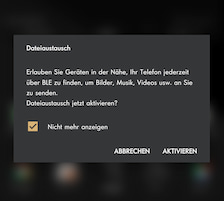 Media transfer via bluetooth
Screenshot: teltarif.de / Andre Reinhardt For this method, your computer or laptop needs a built-in or external Bluetooth module. Such radio modules are often integrated as standard in laptops. Before the first file transfer, the smartphone and the PC must be paired once. Activate the Bluetooth connection on both end devices and make sure that the "Visible" option is active. If the computer was found by the mobile phone, a PIN input request appears after touching the ID. After the PIN has been confirmed on the computer, the connection is successfully established. You can now transfer photos or videos saved on your smartphone to the PC. This works via the "share symbol" (three dots connected by lines) in the right corner of the mobile phone screen. The smartphone then lists various options for sharing photos and videos. The entry "Bluetooth" is also located below this. Now click on it, search for your computer and confirm the file transfer. We recommend deactivating the Bluetooth connection - if it is not required for a headset - after the process in order to save the battery.

The NFC (Near Field Communication) communication standard makes it possible to set up a Bluetooth connection in an uncomplicated manner. Many current smartphones have NFC and various portable computers, such as the Microsoft Surface Go, have this interface. If you have a mobile device and a computer with this type of transmission, all you need to do is place the mobile phone on the NFC area of ​​the PC to establish the connection. Depending on the smartphone, the desired files are selected and transferred via an app (e.g. Android Beam via Google Photos). Windows 10 can handle NFC, provided that it has the right software.

The "Digital Living Network Alliance", or DLNA for short, has launched a standard for the cross-platform transmission of media files. This method couples the smartphone via the home network (WLAN) with a laptop, a computer or other end devices such as televisions and Blu-ray players. However, the content is only streamed, so it cannot be saved directly on another medium. However, you can still transfer the photos from your smartphone to your computer via DLNA via a short detour. First of all, the mobile phone must be prepared for streaming. To do this, the "Share content" option must be activated in the "Media server" tab. 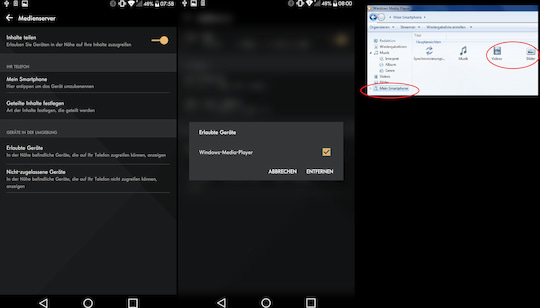 Media transfer via DLNA
Screenshots: teltarif.de / Andre Reinhardt Now an authorization of the Windows Media Player follows. Now start this on the computer, whereupon your smartphone should be displayed. The folders are self-explanatory and the photos and videos stored on the mobile phone can be viewed directly. Unfortunately, images can only be transferred to the computer via DLNA using the Windows screenshot function.

An Android smartphone without a Google account only works to a limited extent, which is why it is advisable to create one or to log in with an existing one. Then there is also a connection to Google Drive, the company's online storage. The cloud comes with 15 GB of free storage space that you can use for your files, including photos and videos. The advantage of uploading the multimedia files to Google Drive is that they can then be downloaded not only on your own computer, but on any computer with internet access.

If you don't want to worry about manually uploading the photos to the cloud storage, you can activate the automatic function in the settings. Then new image files are loaded into memory without any action on your part. We recommend uploading the image files - whether manually or automatically - only with an existing WLAN connection. You can activate this option in the settings. Uploading and updating files will stop when connected to cellular data. As an alternative to Google Drive, other cloud storage services such as Dropbox or OneDrive can of course also be used. 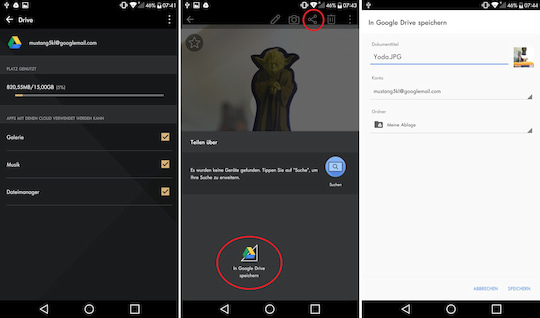 Media transfer via Google Drive
Screenshots: teltarif.de / Andre Reinhardt First, a selection of the desired images and / or videos is made on the smartphone and then the "share symbol" is clicked. The option "Save in Google Drive" finally leads to the upload to the cloud. If desired, folders and file names can be specified beforehand. Going to the url drive.google.com will take you to the online storage on any computer. After entering the email ID and password, the content is listed and is ready for download.

Image files can also reach your computer in this way. You use your mail program as a kind of temporary storage. You can send the images directly from your gallery to your own address via Gmail, for example. Then open the email and save the picture on your desktop. In the test we sent a picture via Web.de-Mail. We recommend this variant firstly only via a WLAN connection and secondly only as an emergency solution. Many image files quickly fill the available memory of your mail account. If you want to send a lot of image files by mail and want to prevent this, you would have to constantly take care of deleting the sent mails.

Media transfer via a memory card

Many smartphones have a memory card slot, mostly in the microSD format. Photos and videos can be stored directly on it or moved there from internal storage. Depending on the mobile phone model, you can access the card either by accessing a kind of "drawer" using a SIM opening tool, or by removing the battery cover. After removing the microSD, it is either pushed into an external memory card reader or one integrated into the PC / laptop.

Media transfer via a memory card
Photos: teltarif.de / Andre Reinhardt If you have a smartphone that does not have a slot for microSD cards, you need an adapter that can be used with a standard SD card. The computer or laptop should be able to recognize and use the card as a removable disk immediately. You can then transfer your photos and videos. With this method, too, we recommend ejecting the medium before removing it from the computer in order to prevent any file loss.

However, it is also possible to connect the smartphone directly to a PC / laptop using a USB cable and access the files stored there without removing the microSD card.

You can find more advice on getting started with your new mobile phone in our overview:

Set up or switch mobile phones 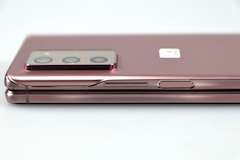