How many people watch the World Cup

You don't have to play nicely to be successful. That is probably the essence of the first two games of the German women's national team at the FIFA Women's World Cup in France. Twice the team of national coach Martina Voss-Tecklenburg had a hard time, twice the team, which was especially convincing through fighting spirit, was lucky not to fall behind, and twice it was 1-0 for Germany in the end.

Two games, two wins - Germany is fully on target before the last group game against South Africa - although lavish football evenings have not been there so far. That couldn't be the case in the first game, the game against China kicked off at 3 p.m. in German time - no time for TV hits. And yet: The very decent television quota for the first game with an average of 4.38 million viewers in Germany was impressive. Even more: at 33.8 percent, the German women's game had a higher market share than the men's EM qualifying game in Belarus in the evening (28.1 percent). An average of 7.1 million viewers tuned in here, but this only meant a market share of 27.6 percent. And the absolute number of viewers topped the second game of the Voss-Tecklenburg team on early Tuesday evening: an average of 6.15 million viewers (29.4% market share) followed the German team's game against Spain on the German broadcaster ZDF. 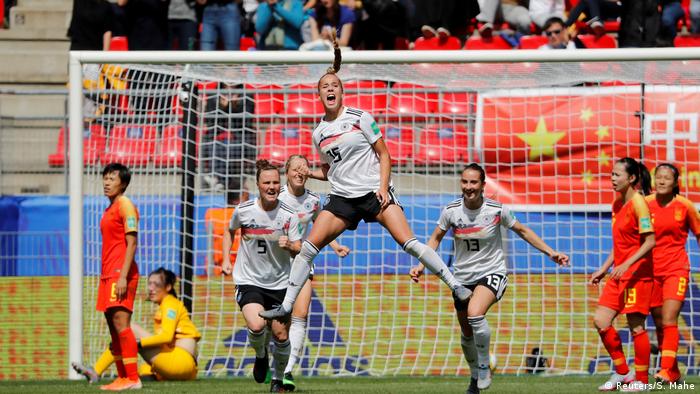 The numbers are remarkable. Twenty years ago, no one would have believed that female soccer players would have a higher market share on television than their male counterparts on the same day. But do these numbers indicate a boom in female football? About a new wave of black, red and gold euphoria that the male national team was able to spark during previous world championships (except for 2018)? There is still a long way to go.

The huge fan festivals in German city centers, Germany flags in windows and cars, and people singing and dancing on the streets are still missing. The World Cup is (still) noticeable on a small scale: in some pubs, at the private garden party or at home on the couch. It was precisely with this discrepancy that the DFB women had played before the World Cup, provocatively highlighting their lack of popularity beyond a small regular audience: "We're playing for a nation that doesn't know our name," was the message of an advertising clip posted in the social Networking went viral, also because it hit a nerve with the Germans.

In any case, the players got into conversation. And the start was as successful as it was with the ratings. However, the bar is now relatively high: even at the 2017 European Championship in the Netherlands, six to seven million viewers in Germany saw the group matches of their own team. In the knockout phase of the 2017 European Championship, the number of spectators increased, much like what happens in the men's tournaments. So the DFB is still hoping for an increase in audience interest in France. The team of national coach Martina Voss-Tecklenburg has already reached the round of 16, which is already before the last group game against South Africa.

Dream numbers a little way off

Compared to the last World Cup in Canada in 2015, the team is already further in terms of sport, at that time the ensemble of the then national coach Silvia Neid had to deliver after a mixed second group game in order not to be eliminated prematurely. Well over 7 million viewers in Germany watched the exciting third game against Norway - and in 2011 it was even more. The 2011 home World Cup set new standards for women's football. In their four World Cup games, the DFB women cracked the double-digit million mark: In the three group games against Canada (15.41 million), Nigeria (16.45 million) and France (16.3 million) as well in the quarter-finals (17.01 million), which was lost 0: 1 against the eventual world champions from Japan.

Such dream odds are not to be expected, at least for the next games of the DFB team. If the finals are successful, they would certainly be conceivable again. But what do these numbers mean?

They show that Germans can, at least occasionally, be very interested in the female side of football. However, based on the experience of past tournaments, it should remain "selective". Because in the DFB camp it has long been known that world and European championships in women's football are a shining exception to the attention. In everyday life in the league, female soccer players suffer from the same problems as many other sports that are overshadowed by male soccer players: lack of media presence, low audience interest on site and on TV (an average of just over 1,100 viewers in the women's Bundesliga), no sustainability of short-term waves of enthusiasm at tournaments.

The quotas are also increasing in the USA, France and England 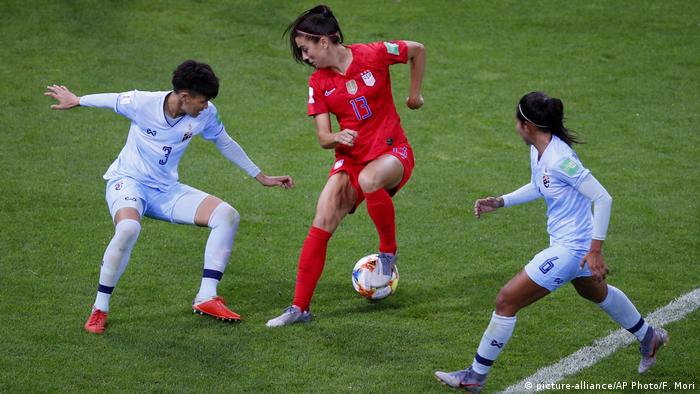 Alex Morgan (center) does magic on the ball and hits five times - and in the USA, too, more people are watching

Nevertheless, many in German football rely on the momentum of the World Cup. The high visibility during the tournament (ZDF alone broadcasts around 70 hours live from France) is intended to motivate girls and young women to lace up their football boots themselves. The clubs are hoping for more attendance. And even if we cannot yet speak of a real boom, the numbers are at least encouraging.

And in an international comparison, there is a clear trend: While 1.4 million people in France saw their team's opening game at the 2015 World Cup, it was now 9.83 million in the home game when the Équipe tricolore played a clear 4-0 opener against South Korea . In England, the BBC also reported an increase in ratings: in 2015, 1.5 million people watched the English team's opening game on the island, and 4.6 million viewers in the English team's first game in the 2019 finals - although the opponents Scotland viewed it positively Range should have contributed (England won 2-1). And in the USA, the number of viewers also increased slightly: The broadcaster Fox Sports reported the Americans' first game in France (13-0 against Thailand) a five percent higher number of viewers compared to the opening game of the US team at the 2015 World Cup - despite the less than ideal kick-off time for spectators in the US.

So the interest in the World Cup for women soccer players is growing measurably. And the tournament has only just started.