What exactly is going on with China's economy

China's economy is growing despite Corona - but only moderately

Due to the corona crisis, the Chinese economy grew more slowly in 2020 than it has for over four decades. The gross domestic product increased by 2.3 percent compared to the previous year, as the statistics office in Beijing announced. This is the worst performance since 1976, which is due to the historic slump at the beginning of the year as a result of the Corona outbreak. In 2019 it was still enough for an increase of around six percent. Nevertheless, the People's Republic is in a good position, as the other large economies have shrunk according to forecasts by international organizations such as the OECD. According to an initial estimate, the German economy has slumped by 5.0 percent.

Only economy with growth in 2020

According to forecasts, China is the only major economy that did not shrink in 2020. According to the official figures, the economy had recently picked up speed. After a plus of 4.9 percent in the third quarter, it increased by 6.5 percent in the fourth quarter compared to the previous year. Since the most populous country on earth has had the coronavirus largely under control since summer and only counts isolated infections and minor outbreaks, economic activities have returned to normal. This year the upswing is likely to intensify considerably: The International Monetary Fund (IMF) is predicting strong growth of 7.9 percent for China. "We think the prospects for the near future remain good," said economist Julian Evans-Pritchard of Capital Economics. "We still see a lot of potential for consumption, as households will reduce the savings they accumulated last year." 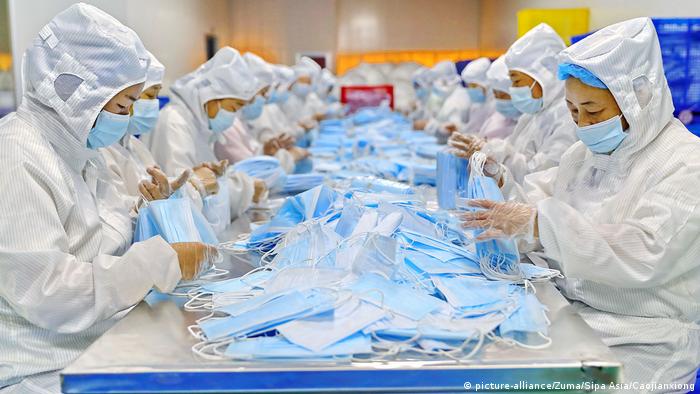 Respirators for the world - here in Heibei

China's growth is helping German companies through the corona crisis

As the Beijing customs authorities announced last week, exports rose by 18.1 percent year-on-year in December alone. Imports had increased by 6.5 percent. "The Chinese economic development in 2020 certainly offered one of the few bright spots in the world," said Max Zenglein from the China Merics Institute in Berlin. The upswing in China helped German companies to compensate for slumps in other markets. The strong export figures can be explained by the fact that the Chinese economy quickly adapted to the new demand situation in other countries. A lot of electronics for setting up home office workplaces as well as medical protective equipment have been supplied from China.

New impulses are expected from the new five-year plan, which is to be adopted at the People's Congress in March. The plan starts where China has suffered the biggest setbacks in recent years. The US trade and technology war with China has made the dependence on foreign countries painfully aware. As emerged from the first communications of the leadership of the Communist Party on the new plan, a new economic course is being embarked upon. Domestic demand and own innovation are to be promoted even more.

China wants to make itself more independent from the USA and the rest of the world. Despite the positive outlook, there are warnings of ongoing challenges. According to the expert Zenglein, the corona situation must also be monitored in China. Recently, there had been hundreds of new infections in Hebei province, which surrounds Beijing. "The rising, albeit regionally limited, corona cases will undoubtedly have an impact on demand shortly before the upcoming Chinese New Year celebrations," said Zenglein.

In particular, it is to be expected that the service sector will be affected if travel and restaurant visits are avoided over the holidays. Even if the situation cannot be compared with the previous year, there will be no carefree New Year celebrations in China in 2021 either. The Chinese New Year falls on February 12 this year according to the traditional lunar calendar.