Is a light rail a train

Have you ever noticed that the KVB has always referred to its railways as urban railways for many years now? Not a tram, not an underground, but a light rail. The Cologne resident, on the other hand, simply says “I'll take the train” or “I'll ride the KVB.” So why do we call the company tram? What exactly is a light rail? Why don't we say e.g. tram line 18 or U3? What is the difference between a Cologne light rail system and the underground trains and trams in other cities such as Vienna, Berlin or Nuremberg?

Put simply, a light rail is a hybrid of the subway and the tram. In order to explain what a light rail is, you first have to know what a tram is and what a subway is. It gets a little technical for that.

The typical tram, which has shaped the image of many large cities, including Cologne, for around 100 years, is a rail-based means of transport for transporting people. As the name suggests, it drives on the road. In many southern German cities, in Austria and Switzerland, it is called the tram. The rails on which a tram runs are in the street. In technical jargon one also says: The rails of the tram are flush with the street. 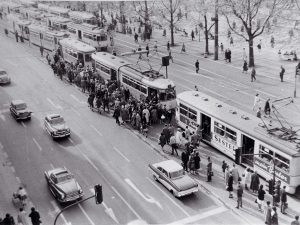 Electric trams shaped the image of Cologne for almost the entire 20th century.

The first electric trams ran on rails flush with the street in Cologne at the beginning of the 20th century. Horse trams, which also ran on rails, had been around since 1877. In the first half of the 20th century, this street level was by and large no problem. The majority of Cologne residents used the trams of the time, only very few had their own car. In times of the economic miracle, however, with increasing individual traffic, the roads were more and more used by other road users, especially motorists. That required new traffic concepts. Individual traffic stands for cars, bicycles, motorcycles and pedestrians.

Cologne never had a pure subway

A first step towards independence from road traffic was the suburban railway lines to Königsforst, Porz-Zündorf, Bensberg and Thielenbruch, built from 1904 onwards, with an independent track body outside the streets, but level crossings at crossings. These routes were connected to the tram network and tram vehicles traveled on. In addition, during the expansion of Luxemburger Str., Aachener Str. And Palatinate Ring, the tram routes were given special railway bodies in which the tracks were structurally separated from the carriageways, but not free of intersections. However, this was not possible in the narrow inner-city streets, so that after 1945 numerous tram routes were not rebuilt there, leaving important gaps in the network such as between the cathedral and Neumarkt, Ebertplatz or Heumarkt.

So the first Cologne subway was finally really planned from the mid-1950s. The first plans were made in the 1920s and 1930s. However, due to the Second World War, these plans could no longer be pursued. On October 11, 1968, the first underground stations Dom / Hauptbahnhof, Friesenplatz and Appellhofplatz were finally opened and the "underground" was put into operation. (More on this in the article: "50 years ago when the trams went underground"). 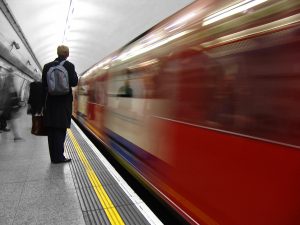 A pure subway, as there are in many major European cities, does not exist in Cologne. © David Hewitt, Freeimages.com.

In contrast to a tram, a subway is an (underground), rail-bound means of transport for the transport of people, which moves separately from other road traffic in a closed system on an independent track body. It does not matter whether the subway is supplied with electricity by overhead lines or rails. Incidentally, a subway is not necessarily defined by the fact that it runs underground, even if it was originally designed as a pure subway in cities such as London, Berlin or Paris in the second half of the 19th century in order to cope with the already increasing traffic there meet. Incidentally, the first underground line opened in London at the end of the 19th century. At that time, however, it was still operated with steam (i.e. not with electricity).

"Underground lines can therefore run not only in tunnels, but also on embankments, bridges or other elevated routes," is how the Association of German Transport Companies (VDV) defines the underground. The U now stands for “independent” rather than for “underground”, namely independent and free of intersections from road traffic. In Cologne, however, all of this only applies to isolated sections of the route and not to complete lines. Even if most of the routes now have an independent or special rail structure, almost every line has at least one piece of railroad-flush somewhere on its route (e.g. line 3 in Buchforst, line 5 in Neu-Ehrenfeld, line 7 in Lindenthal, line 9 in Sülz, line 12 in Zollstock) or is not free of crossings (e.g. line 1 between Weiden and Heumarkt). 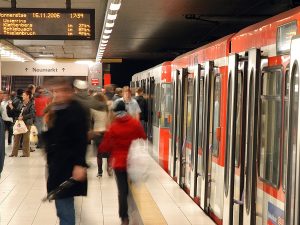 There are only individual subway sections in Cologne. No light rail line travels the entire route through tunnels or on a high track.

Therefore, the current Cologne railway system can neither be described as a pure subway nor as a tram. The colleague Ulf Bohndorf from the local traffic management department says: “The Cologne subway was never a pure subway, because the first trains and lines that ran there were just underground trams. At that time, the term Unterpflasterstrassenbahn was coined, ”said Bohndorf. Raimund Jünger, long-time head of planning and design at KVB, adds: “The subway thus developed from individual routes that were connected to the existing tram network via ramps. This concept allowed even short tunnels to be used immediately without changing trains in combination with the independent railway bodies and special railway bodies of the tram network . So there was never a pure underground line in Cologne that only ran in the tunnel. In most German cities such as Stuttgart, Frankfurt, Hanover, Düsseldorf or Dortmund, it was similar for reasons of cost. Only the cities of Hamburg, Berlin, Munich and Nuremberg afforded pure underground routes. In many East German cities it is still mainly the trams that dominate the cityscape.

Where does the term “Stadtbahn” come from?

The current term light rail, as it is also used in many other cities for the local rail systems, describes a mixed system of street-level tram routes, street-independent subway routes and routes with a special and independent track structure, on which the individual traffic is only used at intersections to encounter.

Today's mixed system and with it the term have their origin in the 1960s, when more and more tram routes in the inner cities were relocated to their own routes next to the streets or between the two lanes in order to no longer have to share the routes with individual traffic. The term light rail then prevailed for these modernized systems with a high proportion of tunnels and independent or special railway bodies. 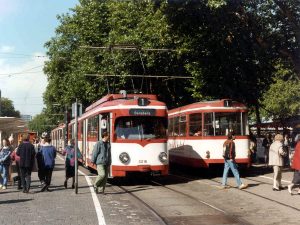 The last Cologne trams were the eight-axle Duewag articulated wagons.

Incidentally, the term light rail is not a protected term. It appeared for the first time in Vienna in the second half of the 19th century. "Stadtbahn" comes from the term "city railway" and was also significantly coined in Berlin. Many European cities followed suit. At that time, the word “Stadtbahn” in the name was used to make a distinction to the railroad, because the urban railways at that time - in contrast to the railroad - mainly ran in urban areas. Jünger explains: “The railway lines were on independent tracks, but were used by tram vehicles in Vienna. In Berlin they followed the railway lines with shorter distances between stations. Special trains ran in a dense cycle schedule, from which the S-Bahn (city express train) developed. ”Even today, some transport companies use the word Stadtbahn in their name, although they actually operate classic trams.

Why we at KVB say “Stadtbahnen” has to do not only with the track structure on which the vehicles move, but also with the size and speed of the railways. In terms of capacity, light rail vehicles are somewhere between classic trams and subways. A tram can carry around 150 passengers, an underground between 800 and 900 people. City railways, as they run in the Cologne network, carry between 300 and 400 passengers in the double traction. The average travel speed is also higher than that of a tram, but lower than that of an underground train that is independent of individual traffic. Like trams, the vehicles are not only equipped with magnetic rail brakes, brake lights and direction indicators for driving on sight and participating in road traffic, but also with train control. This enables them to drive on signal on subway lines with train protection in accordance with legal regulations. In Cologne, light rail vehicles can also run on the railway lines to Bonn and Frechen and enable lines to the Bonn network without changing trains. 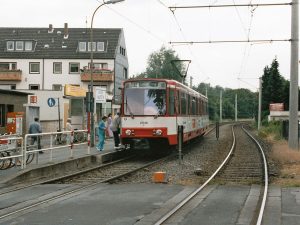 The first Cologne light rail vehicles came from the Düsseldorf wagon factory Duewag in the mid-1970s.

Light rail vehicles, as they are in operation today in many other cities in North Rhine-Westphalia (e.g. Dortmund, Bonn, Duisburg, Düsseldorf, Essen) were first used in Cologne in the 1970s. Since the type A trams that were first designed at the time could not be used in Cologne and Bonn due to their size, Cologne developed its own tram, the type B tram, which was then used on all tram networks in North Rhine-Westphalia. Between the end of the 1970s and the mid-1990s, these light rail vehicles gradually replaced the Cologne trams (eight-axle vehicles). Then other types of light rail were added. The last real Duewag articulated tram ran until 2007, namely on line 6. 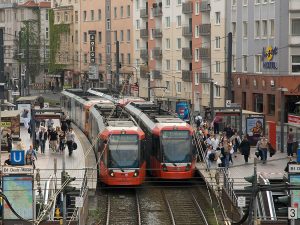 More modern light rail cars of the type 5100 and 5200 from Bombardier.

In addition to the B-cars, there are other types of light rail in today's Cologne network, especially on the low-floor routes. Because in addition to the mixed tram / underground / light rail system, we also have a mixed system for the light rail vehicles themselves in Cologne. There are so-called high-floor vehicles and low-floor vehicles. They differ among other things in the entry height. The platforms of Cologne's high-floor vehicles are 90cm above the top of the rails, while low-floor trams can be reached barrier-free via a 35cm high platform. Even if low-floor trams have a similar entry height as classic trams in Cologne (although the latter were not barrier-free due to the steps), they are still not trams, but also light rail vehicles. Incidentally, this mixed system in Cologne makes it possible for 90% of our tram stops to be barrier-free because only some of the platforms had to be rebuilt.

Conclusion: The Cologne railways are neither subways nor trams, but a mixed system that virtually unites both types of transport in one “city train”. 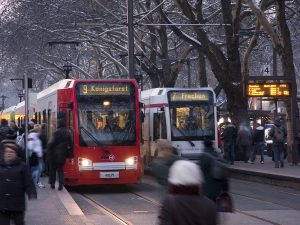 This mixed system of trams, subways and special railway bodies often causes problems because individual traffic crosses our rails in so many places and this causes delays and cancellations time and again. “Such a mixed system also has its advantages,” says Ulf Bohndorf in conclusion. "Our light rail system connects parts of the city that, due to the structural conditions, can only be accessed by tram tracks and have short bus stops with downtown Cologne as well as overland routes far outside Cologne - and that for the most part as a direct connection without changing trains."

The second life of the Cologne trams.
From the horse-drawn tram to the e-bus.
I will ‘train driver at KVB.
How does the announcement come in the bus and train?
About escalators and why they sometimes don't roll.